Today was beautiful, proper summer weather, and I had the day off, so I went down to see the bees before the rain predicted tomorrow arrives.

On Saturday we split our hive into two because we had sealed queen cells inside. The old queen, Queen Rose, was moved into a nucleus hive with some brood and stores, so I checked on her.

As you can see they’re doing well, only the frame at the top has yet to be completely drawn out. Looking through I spotted Queen Rose, freshly laid eggs pointing straight up into the air and tiny larvae. So she is still laying well, as you would expect a one year old queen to be. I spotted a few queen cups at the bottom of one frame, but thinking about it can’t remember if they were already there on the frame on Saturday. Should really squash them down next time.

They had nearly run out of the sugar syrup we gave them, so I topped that up. Here’s a couple hobnobbing on their nice clean new nuc porch:

Didn’t feel like doing anything very active afterwards, so just walked along the paths in the park by the canal, it’s only a five minute walk from my house. There’s some pretty wild bits of flowers and trees down there once you get beyond the mowed conventional swings and tennis courts bit of the park and get nearer the canal. I even stumbled into a bit of wood full of bottles – obviously used by teenagers/tramps for drinking in – and then spent ages trying to find a way out again through the undergrowth.

Recently I’ve been a bit more curious about where my bees get their nectar and pollen from than before. I can’t fly fast enough to follow them, but I can keep an eye out for what’s flowering. The nettles are out now:

Some bumbles were on the nettles, but they flew too fast for the camera. I was more lucky with these dog roses: 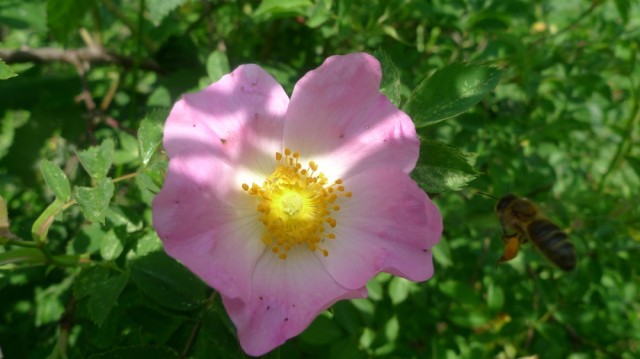 Part of the reason honey bees are such good pollinators is that a foraging bee tends to stick to just one type of flower. She will know the time of day her chosen flower is producing maximum nectar and visit it then. And she lands….

Her pollen baskets are rose pollen colour only. There were plenty of these roses about. It’s nice to think that Queen Rose could be receiving some rose pollen right now. I found a bit about dog roses online, it seems the bees collect the pollen only from them:

Entomophilous flowers are usually brightly colored and scented. They normally contain a sweet liquid – nectar – as well as pollen, but some flowers (e.g., dog rose) are “pollen flowers” – they produce extra pollen as insect food but no nectar. The pollen of entomophilous flowers is sticky and adheres to the bodies of insects. Because of the more efficient pollination mechanism less pollen is produced than in the wind-pollinated flowers.

In contrast the bees were also on this little blue flower, but only sipping nectar, their pollen baskets were empty:

I don’t know what this little blue flower is called, but it’s a common wild flower around here. Anyone know?

As revision for my BBKA Honeybee Communication module exam earlier this year I did a revision post which has some more info on foraging behaviour.

I am a UK beekeeper who has recently moved from London to windswept, wet Cornwall. I first started keeping bees in the Ealing Beekeepers Association’s local apiary in 2008, when I created this blog as a record for myself of my various beekeeping related disasters and - hopefully! - future successes.
View all posts by Emily Scott →
This entry was posted in Uncategorized and tagged bees on flowers, foraging, nucleus. Bookmark the permalink.

9 Responses to Inside the nuc