The coming of the snowdrops

Each year I wait for this and it always fills me with optimism. The apiary snowdrops are now in full spectacular bloom, all white and green against the winter. Quite a few people were saying how much bigger they look this year.

The apiary was silent and still, with no bees flying out to greet us. Only a magpie and a robin flew. Under the hive roofs I found our bees clustering round their fondant, their little eyes peering upwards at the blast of cold air. I did not peek long. Under the hives, the varroa boards had few mites on them – around 3-10 had fallen on the various boards during the week. The oxalic treatment has worked.

The crocuses are out too. I suspect they must open for the morning sun as I always seem to find them closed for business. Their little clumps always seem more fragile than the cavorting snowdrops. 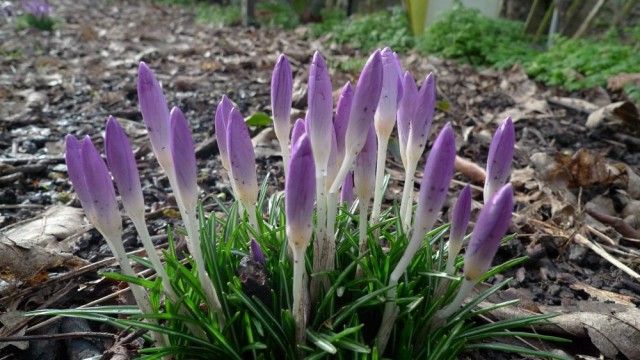 None of us had brought any cakes, so we had to make do with hot tea and soft biscuits. A cold has kept me sniffling this week and not in the mood for baking, but today I’m feeling better. Standing around the table, stories were told. A decorator who wanted to charge £450 to put up wallpaper in a small box room. Students paying £500 a week to rent a room. Poor Stan has had to deal with a new enemy – a fox who was seen knocking two of his hives over and eating the contents. Let’s hope more foxes don’t pick up this trick.

According to the Met Office, meteorological spring runs from 1 March to 31 May, whereas astronomical spring runs from 20 March to 21 June 2015 (see When does spring start). The 20th March is in four weeks time, so if all five hives are still alive by then we can truly say we have got all our bees through winter.

Looking back at my blog, we have shook-swarmed the bees before on either the 2nd, 3rd or 4th weekends in March, depending on which weekends turned out to be sunny. Alan was saying that he plans to shook-swarm his in the next couple of weeks, as he feels that if left too late you end up destroying more brood and it sets the colony back more. He did say that you need a good sunny location and a big colony, preferably in two brood boxes, to do it in February.

Once we do the shook-swarm the beekeeping year will kick off and the work involved in having five hives which need to be inspected weekly will truly begin.

20 Responses to The coming of the snowdrops