A long delayed visit to the bees

I have been missing my bees. It is tricky visiting them as so far Tommy has refused to drink his milk from a bottle, meaning that I’m the only person who can feed him. It is easily a two hour round trip to the apiary by public transport and he usually feeds every 1-2 hours in the day. So you can see the difficulty. However on Saturday Drew drove us down and entertained him for a while, so that I could concentrate on a little beekeeping.

I was enchanted to find new comfy picnic tables and a much improved fence. Tea and cake at the apiary will taste even better now. 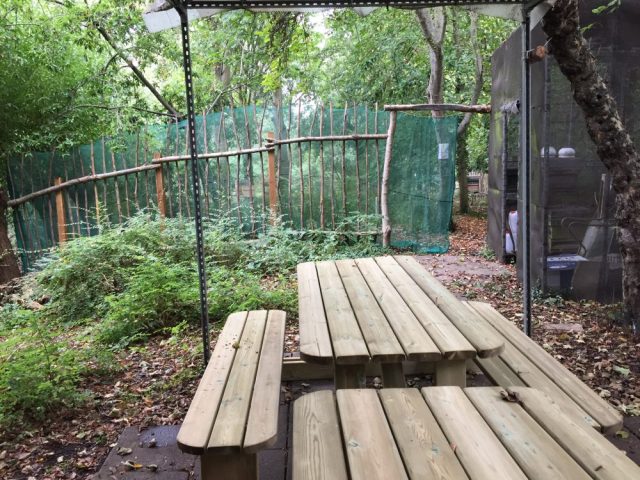 Emma and I have sold off a lot of equipment, Tom built us a lovely new equipment stand and Emma has done some tidying, so our once towering equipment empire is now much more manageable.

After several days of a freakishly warm September, in contrast Saturday was overcast and chilly. So I didn’t inspect but did some tidying – removed the empty Apiguard trays and ekes, took out the varroa monitoring boards which were taped up for the Apiguard treatments and topped up the syrup feeders. 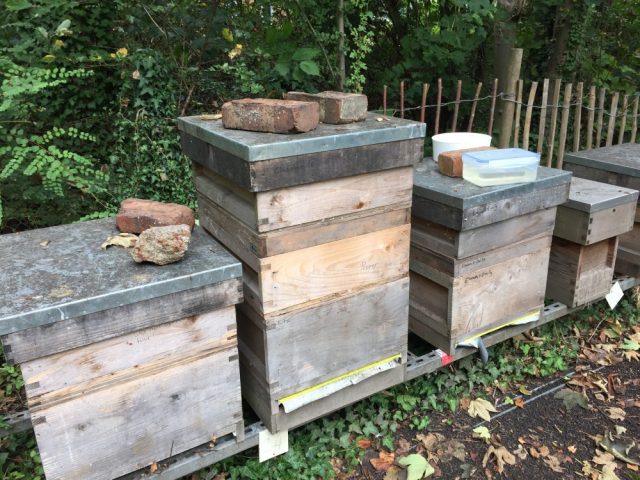 Melissa’s colony is smaller than we would like, so I added a couple of dummy boards to help them keep warm. We may need to put them in a nuc over winter.

It felt a bit painful visiting the bees, a reminder that I have been neglecting some parts of my life. But it was also nice to lose myself in the actions of caring for them. Lift the hive roof off, lay it down on the ground, gently lift off the feeder and prise off the crown board. Physical work is satisfying.

I spend a lot of time walking around to keep Tom entertained. In one of my local parks these pretty pink and white  cyclamen (thanks Lucy Garden for correcting me in the comments!)  are flowering. I noticed a little brown carder bee visiting them.

Ivy flowers are out now too – an important late source of forage for many pollinators. There’s even a bee which specialises in visiting them, the Ivy bee, Colletes hederae. It forages almost exclusively on ivy’s delicate green and yellow flowers, flying only from September to mid-November. The Bees, Wasps & Ants Recording Society (BWARS) has a Colletes hederae mapping project, so keep an eye out for these bees if you live in southern England or Wales. They were first recorded as new to Britain in 2001 when Ian Cross discovered specimens at Langton Matravers in Dorset. 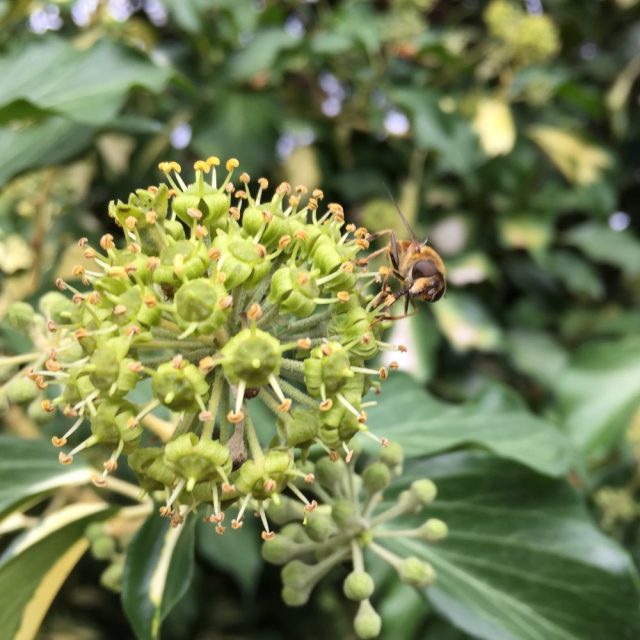 A short visit but I hope to go again soon.

20 Responses to A long delayed visit to the bees