Notes from Cornwall ‘Bit of a do’ Beekeeping conference 2018 – Chris Park, Skep beekeeping (3.)

Chris keeps bees on organic farmland around the Oxfordshire / Wiltshire border and the Upper Thames valley. After researching and experimenting with varying styles of skep beekeeping, Chris teaches and lectures on skep making, beekeeping and beekeeping heritage / history around the UK. He says that the practice of skep-beekeeping is not everyone’s cup of tea, but it can be educational, rewarding and bee centred, in his experience creating healthy and happy stock.

I enjoyed this talk more than I was expecting. Chris comes across as quite a romantic character, into folklore and going back to old ways of doing things. He told us that before Britain was inhabited it was called the ‘sea-girt green space’, or ‘Clas Myrddin‘. And then after it was inhabited it was called the ‘Honey island’, or ‘Y Vel Ynys’. Chris has written online about what that name means to him: ‘The Honey Isle by Chris Park‘.

The history of skeps – ‘skep’ means basket and is an old type of woven beehive which is rarely used nowadays apart from for catching swarms. They were made from many materials in the past, with wicker and straw being popular options. Skeps need to be placed under a shelter to stop them getting wet and rotting. Rich men used ‘bee boles’, alcoves in a wall. Poor men used wooden shelters. To try and make them more weatherproof, skeps were dressed with cows dung and hog saliva! 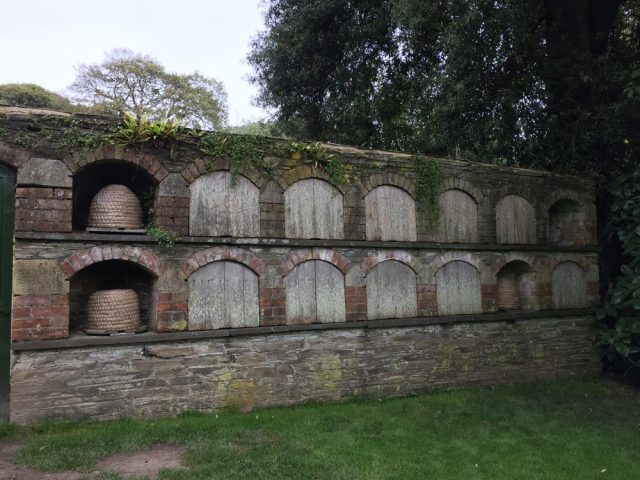 He made some observations about the benefits of skeps to his bees:

And also about the disadvantages:

There are some practical things which can be done to improve on the basic dome shaped traditional design. Putting cross sticks inside supports the comb, otherwise it can fall out when you look inside the skep and then put it down again. Chris learnt this the hard way the first time he put a skep down and then heard a thump as the comb landed down too. You can use an open mesh floor or tray underneath for ventilation and catching varroa. You can also make a multi-layered brood skep with a removable super skep on top, to make harvesting honey less intrusive.

Not many beekeepers use skeps other than for swarm collecting nowadays, but there are a few people out there doing skep beekeeping still. The Dartford association have bee boles in their apiary walls. (While writing this post I discovered this 2013 article: ‘Dartford beekeeper recounts his war ordeal‘, which has a picture of William Mundy, the Chair of Dartford beekeepers, with the bee boles and skeps. He was held as a prisoner of war during the Japanese occupation of Singapore; after managing to catch a swarm he was able to donate honey to the prison hospital so that it could be used to treat wounds and burns).

If you want to read more, check out these articles by Chris for the Dave Cushman website:

I am a UK beekeeper who has recently moved from London to windswept, wet Cornwall. I first started keeping bees in the Ealing Beekeepers Association’s local apiary in 2008, when I created this blog as a record for myself of my various beekeeping related disasters and - hopefully! - future successes.
View all posts by Emily Scott →
This entry was posted in Events, Hive types. Bookmark the permalink.

10 Responses to Notes from Cornwall ‘Bit of a do’ Beekeeping conference 2018 – Chris Park, Skep beekeeping (3.)