My latest beekeeping bungle – and how I fixed it

This autumn I made the classic error of giving bees too much space. I put an eke on top of the brood box to do Apiguard treatment. Then I went on holiday. The first opportunity I got to inspect the bees after holiday happened to be a minging day, with the rain pelting down. I decided to feed them and leave without doing much else.

So the bees had lots of time and space to get up to mischief. And what my strong, feisty colony decided to do was this: 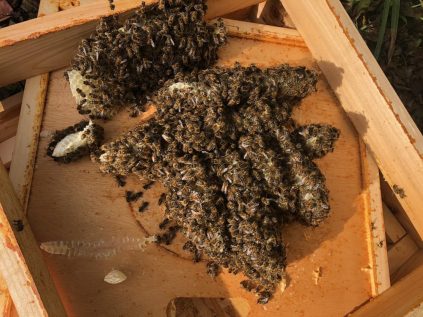 View of the eke

I was actually quite lucky, because the bees had built the comb mostly on the crownboard. The exception was a fairly big piece built directly on top of a brood frame. I tried to scrape this off with my hive tool, which is when the bees went bananas! This was their project, their lovely fresh new comb, and I was wrecking it. You can sympathise with their fury.

I didn’t want to leave this comb in place over winter, because chances were they would have made even more by spring. It wouldn’t have been a problem for the bees, but you can’t inspect comb like this for queen cells or disease, so it’s not ideal.

I retreated and emailed the kind local beekeeper who sold me these bees for advice (the swarm I caught this spring, by the way, had the same amount of space during the Apiguard treatment but didn’t make any extra comb!). He got back in touch with some brilliant advice. This included taking the crownboard and rogue comb 10-20 yards away and then leaving it a few hours, the idea being that meanwhile most of the bees would return home. He also suggested covering the brood box with a cloth while I tried to remove the one piece of comb attached to it.

Simple, practical tips like these are so useful. It reminded me that I had been trying to move too fast and too impatiently, rather than working with the bees’ natural behaviour. I needed to slow down to bee time and wait.

So one sunny weekend morning I upturned the roof and left it a few feet away from the hive. On top of this I placed the crownboard and its comb, covered with a profusion of busy bees. You can see a short 13 second video on YouTube. Then I covered the (now roofless) hive with a spare crownboard and walked away.

A few hours later, I returned. It had worked! Nearly all the bees had returned home and left the previously covered comb attached to the crownboard. I could easily remove the unguarded comb. And a cover cloth over the brood box kept the bees from flying up from the combs, so that I could quickly scrape the one remaining piece off. Job done.

Have you ever made a beekeeping bungle like this? What’s the naughtiest thing your bees have ever done?

For my next post I’ll write about winter preparations – which reminds me, I must get some chicken wire. 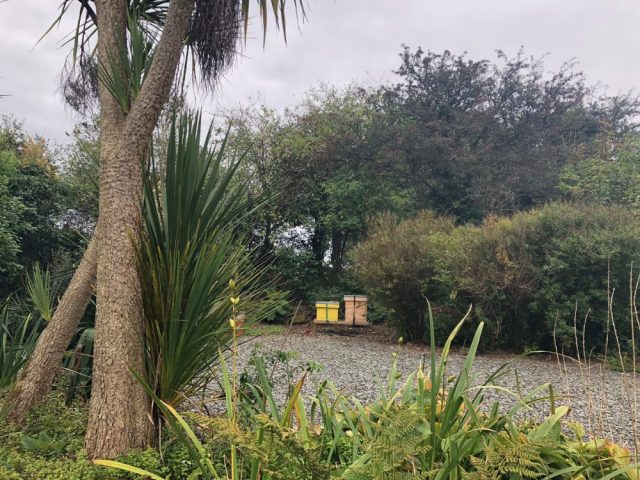