Another wet, damp day at the apiary yesterday. But my little bees were still out in force, carrying back swollen pollen baskets filled with a bright yellow and golden pollen. I asked John Chapple what they might be finding, and he suggested Michaelmas Daisies and other members of the Aster family, shown in the pic below. The Daisy takes its name because its blooms historically coincided with the Feast of St Michael on 29th September. Asters are also sometimes known as ‘September’s flower’. 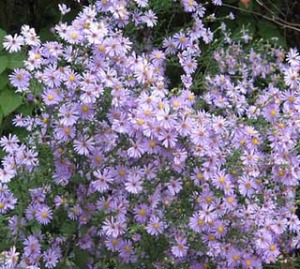 My October BBKA News newsletter arrived this week. It had a couple of exciting articles on bee biology (my favourite beekeeping topic) inside it…

1. An article on bees’ feet. While beekeeping I rarely stop to consider their feet – I’m more worried about their posteriors – but their feet turn out to be quite fascinating. They contain a pair of claws and an adhesive organ, the arolium or pad. The claws are usually protruded to enable the bee to grip whichever surface it is traversing. The article mentions that the claws can be:

“a drawback because the bee can be unable to disengage itself from hairy surfaces like a beard or good head of hair with a sting being the usual outcome!”.

Yes, as I’ve found twice now. Both times a bee landed on my head and seemed to get stuck inside my hair, frantically moving about buzzing angrily until it eventually stung me. So bald beekeepers have an advantage!

The claws are also involved in wax manipulation while comb is built and for workers to hang together while clustering to secrete wax or in a swarm. Queens have small claws, workers medium size and drones largest of all. Why should drones, who clearly do no wax manipulation work or indeed any work at all, have the largest claws? One theory is that they come in ‘handy’ during mating, when the drone approaches the queen from behind and above, grasping her firmly in his last moments before the act of consummation.

November 2013 update: The BBKA News Nov 2013 issue contains another interesting article on bees’ feet, titled ‘Do Bees’ Feet Have Suckers‘, by Ian Stell, Master Beekeeper. He explains that it’s likely bees can hold on upside down on a smooth flat surface such as glass using electromagnetic forces produced between molecules close together, known as Van de Waal’s forces. If the surface is rough enough bees can grip using their claws, and the entire weight of a swarm can be supported by the bees at the top gripping onto a branch, while the rest of the bees grip onto each other.

2. Pheromone smell variations. Another fascinating discovery for me was that variations in the genetic makeup of the workers can produce small variations in the chemical constituents of various pheromones. Along with the sources of pollen and nectar in the hive this gives each colony an individual ‘colony odour’ – which helps guard bees identify potential robbers because they smell different. However, if a robber bee manages to evade the guard bees and nip through the entrance her smell is masked by the hive odour and she can pretend to be part of the colony.

So powerful is a bee’s sense of smell that they can tell whether they are full sisters – ‘super-sisters’ with the same father or only half sisters with another worker bee in their hive (a queen will mate with multiple drones, so her daughters have multiple fathers). The mating process of honey bees means that the genetic makeup inherited from their father is identical and thus they are more closely related to each other than normal sisters, hence the term super-sisters.

These groups of super-sisters are able to differentiate themselves because the minor genetic variation between them results in very similar pheromone constituents and thus very similar smells compared with their half sisters. These subtle smell differences can even be used in the recognition of eggs laid by a different sister class of worker. This, in combination with pheromones produced by the queen, is sufficient to ensure an unfertilised worker egg is destroyed and not allowed to develop. Queens also have their own individual smell of course, which helps drones recognise their queenly sisters and (generally) avoid mating with them!

Although the beehive is dark, for bees it must be lit up by the rich variety of smells which make up their world – the smell of brood wanting food, the smell of brood ready to be capped, the sweet smells of nectar, pollen and honey, that of their full super-sisters and half-sisters, and the reassuring smell of their queen.

I am a UK beekeeper who has recently moved from London to windswept, wet Cornwall. I first started keeping bees in the Ealing Beekeepers Association’s local apiary in 2008, when I created this blog as a record for myself of my various beekeeping related disasters and - hopefully! - future successes.
View all posts by Emily Scott →
This entry was posted in Bee biology, Queens and tagged bees' feet, colony odour, pheromones. Bookmark the permalink.