On Tuesday Caroline Washington, our local bee inspector, had found a queen cell in our hive. Yesterday we decided what to do about it.

Caroline hadn’t been able to find Queen Rose on Tuesday. Possibly she was wisely hiding at the bottom of the box because it was so flipping cold. Yesterday was a lot sunnier and Emma found her on the fifth frame in. Here she is: 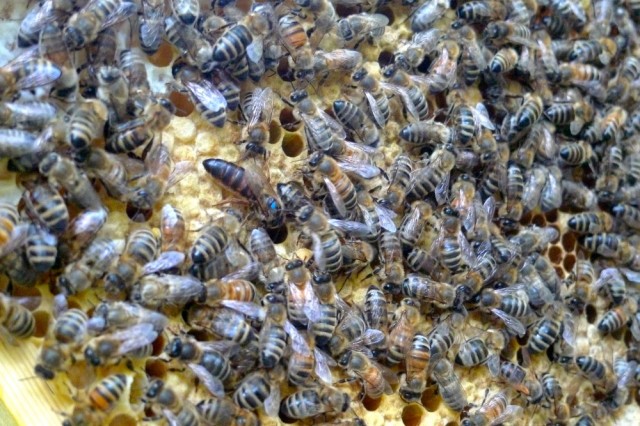 Isn’t she a beauty? She looks as if she may be inspecting an empty cell, making sure it’s clean before measuring its size with her forelegs to tell whether to lay a worker or drone egg inside.

On another frame we noticed a bee stained with a lovely orangey/red pollen colour. Can you see her in the middle there? There is also a big beady eyed drone a bit to her right and little larvae are visible in the cells.

Here’s the queen cell. Everyone who has seen it has agreed that it is a perfect example of a queen cell, nice and big. As Emma said, it looks a bit like something from outer space. A bit further down, covered with bees, is another queen cell. At this point we asked for help from Andy Pedley, who knows what he’s doing. He recommended we do a split.

Luckily we had a nucleus ready to split the colony into – after the inspection on Tuesday Emma had contacted Thomas Bickerdike, a talented Ealing beekeeper and carpenter who runs a hive making company called the Beehive Workshop – www.thebeehiveworkshop.co.uk. He was able to make us up a cedar nucleus for £90 and have it ready for Saturday. The nucleus was beautifully made, very sturdy with a mesh floor and a little varroa monitoring board underneath which pulls out. Thomas also does a plywood version for £30 which is only designed for temporary summer building up of a colony. The cedar version will keep colonies warm overwinter and last us a lifetime. So much more convenient than ordering from a big supplier – as Thomas comes down on Saturdays anyway he could just bring it down with him rather than one of us having to stay in at home waiting for a delivery and then bring the nuc down in a taxi. Plus it’s nice to buy from someone you know.

Andy got us to put Queen Rose, a bit of brood and some stores into the nucleus, which fits five frames. Having a small space helps a small colony in keeping the brood at 35C. If the colony gets big enough we can eventually move them into a full size brood box before the winter. We moved the nuc a bit further away.

In the old brood box we left the queen cells, brood and stores with a super on top. Andy thought the larger queen cell would hatch first and the young queen would probably kill the other by stinging her cell. But we’ve left both queen cells just in case something goes wrong inside either of them. Now that we’ve split the colony they’re less likely to swarm.

The newly emerged princess will have to wait for good weather before navigating all the dangers of hungry birds to reach a drone congregation area up in the sky, where she will mate with multiple drones. Here is how Thomas D. Seeley describes the emergence of a queen in his book Honeybee Democracy (2010):

We must now leave the old hive with the queen cells alone for two-three weeks so as not to disturb the new young queen. It will be difficult to do so knowing all the drama that must be going on inside!

I am a UK beekeeper who has recently moved from London to windswept, wet Cornwall. I first started keeping bees in the Ealing Beekeepers Association’s local apiary in 2008, when I created this blog as a record for myself of my various beekeeping related disasters and - hopefully! - future successes.
View all posts by Emily Scott →
This entry was posted in Colony management, Queens, Uncategorized and tagged queen cells. Bookmark the permalink.

4 Responses to A royal break-up