After a week of rain and cloud the weather seems to be on a turn for the better, just as the weekend arrives. The bees will be pleased; the rain will have helped flowers produce nectar and the sunny weather will give them a chance to collect it.

In Elthorne Park, which borders on the canal near my house, I found plenty of bees today. The dog roses which the bees loved so much back in May have come to an end, but the blackberry brambles are flowering everywhere. And some new flowers are also out – hopefully the June gap is coming to a close.

A honey bee enjoying a thistle, which produce quite large amounts of nectar and pollen.

Honey bee on these pretty white flowers – a previous commenter has told me they are likely to be ground elder or the less glamorous sounding hogweed. Whatever they are, bees, flies and ladybirds adore them. 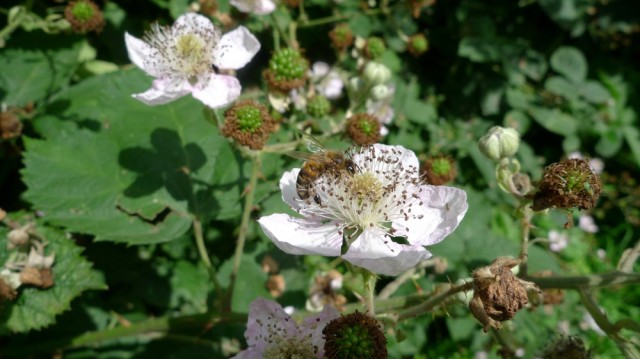 White and red clover is out. Red clover is very popular with bumble bees but not honey bees, as their tongues are too short. Both bumbles and honey bees love white clover. I thought this might be a common carder bee on the white clover above. This species usually nests on the soil surface under leaf-litter or moss and is common in gardens throughout the UK which don’t have their lawns mowed too often.

The legume family, including clovers, vetches and trefoils, have bacteria in their root nodules which are able to turn nitrogen from the air into nitrates that the plant needs to manufacture protein for growth – in other words, they make their own fertilizer. This means they can afford to put more protein into their pollen, making their brown pollen especially nutritious to bees. 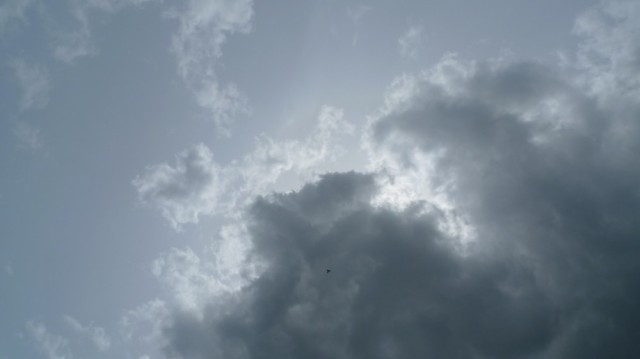 You can barely see it, but that black dot against the grey cloud is a bird of prey hovering up above, finding food in a London park squeezed between major roads. Its body flashed red as it hung above me, making me wonder if it could be a red kite.

Lavender is always popular. The air was humming with bees flying between its purple flowers. It usually flowers from July to August in the UK, but has been flowering in London a few weeks now. The honey is medium to dark amber in colour and strongly (deliciously!) flavoured.

Walking through the park and seeing the bees on the flowers makes me convinced that worrying about things like mobile phones is a red herring. Bees need food and a home: give them the right flowers and a place to live and they will come. Unfortunately we have destroyed huge amounts of their natural habitat. Over 95% of the UK’s natural unimproved grasslands (hay meadows and chalk downlands) have been lost (Bumblebee Conservation Trust). Less than 2% remains of what we had just 60 years ago, the rest having been ploughed up and replaced by cereal fields, or ‘improved’ with fertilizers which cause grass to grow very quickly and squeeze out flowers like clovers.

I am a UK beekeeper who has recently moved from London to windswept, wet Cornwall. I first started keeping bees in the Ealing Beekeepers Association’s local apiary in 2008, when I created this blog as a record for myself of my various beekeeping related disasters and - hopefully! - future successes.
View all posts by Emily Scott →
This entry was posted in Uncategorized and tagged bees on flowers, bumblebees. Bookmark the permalink.