After a couple of weeks of heavy rain sunshine is back in Britain again. The flowers are changing outside, the days are shortening and honey bee queens are gradually laying less eggs as the hive emphasis changes from increasing numbers to storing honey for winter. During August honey bee population numbers will fall from a July peak of 50,000-60,000 adults and 40,000-50,000 eggs/brood larvae in a typical hive to around 45,000 adults and 30,000 eggs/brood larvae. The drop will be even more dramatic come September.

In the bumble bee world, towards the end of the summer the queen produces some sons, along with new queens. After mating, the males die off, as do the old queen and workers. Only the new, fertilised queens survive to hibernate through the winter, ready to start nests of their own the following spring.

Walking through the park I found these pretty pink flowers with elaborately curled white anthers. Their name is unknown to me, can anyone help identify what they are?

EDIT: The pink flowers have been identified by Ashley below as possibly “willow herb family (fireweed) but it’s not the most common one (rosebay willow herb) as the flowers are too large and too round.”

This month’s BBKA News has a great article by Adrian Davis, Canterbury BKA, on bee-friendly plants which mentions Rosebay willow herb as a late summer flowering plant with “stunning rose-purple flowers”. It is a tall, perennial herb found on wasteland, railway embankments and woods, rapidly colonising open areas and much loved by bees. One of my favourite bloggers, Theresa Green, has produced a fascinating post on the biology and history of the plant: Rosebay willowherb.

The field also contained a sea of yellow flowers. I’m ashamed to say I didn’t know what they were either. EDIT: Liz Chapman and Nigel Clark have both identified it as ragwort. Nigel mentions that it is highly toxic to horses. Luckily I didn’t see any horses about, but then maybe the ragwort killed them all already… Ted Hooper’s classic ‘Guide to Bees and Honey’ says “Honey from ragwort is extremely offensive in smell, but once crystallised this is lost and it is as acceptable as any other honey.” It gives the bees both nectar and bright yellow pollen. 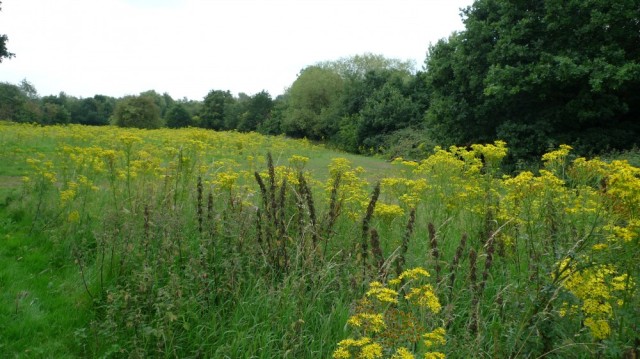 The bumble however looks like a Buff-tail, a very common species.

And this golden madam is a honey bee hanging out with a shiny beetle. She’s much paler than the black-striped honey bee above on the pink flower.

And what I’m assuming is a species of thistle, which Ted Hooper says can produce quite large quantities of nectar and pollen. Dave agrees with me below that it’s a thistle, Ashley thinks a type of knapweed and Nigel thinks burdock, a type of thistle used to make the traditional drink Dandelion and Burdock.

The rain followed by sunny weather is good news as nectar secretion in many flowers, such as clover and heather, is boosted on a sunny day. Below certain temperatures plants will not secrete nectar, e.g. below 8C in wild cherry. Hawthorn only secretes well when the temperature is unusually high for a British summer, at least 25C. A few species, such as brambles, are not influenced by temperature and will continue flowering until cold weather and frosts.

The Bumblebee Conservation Trust lists some of the flowers important for bumbles in July-September on their website at http://www.bumblebeeconservation.org/gardening_for_bumblebees.htm. They include brambles, mints, heathers, red clover, thistles and lavenders.

I’m off on holiday in San Diego for most of August. By the time I get back at the beginning of September there may be very few foraging bumbles left to photograph. I’ll miss you, pretty furry fuzzy bumbles.

I am a UK beekeeper who has recently moved from London to windswept, wet Cornwall. I first started keeping bees in the Ealing Beekeepers Association’s local apiary in 2008, when I created this blog as a record for myself of my various beekeeping related disasters and - hopefully! - future successes.
View all posts by Emily Scott →
This entry was posted in Uncategorized and tagged bees on flowers. Bookmark the permalink.