The honey harvest is over and London temperatures are cool; since returning from San Diego at the end of August, where I wore shorts every day, my winter coat and scarf have already been pulled into action a couple of times. The bees know winter is coming (as does any Game of Thrones fan). Look at them frantically bringing home the pollen, bringing home everything they can now while a few flowers are still out there.

That bright tango orange pollen was a mystery to me until I saw a post in the British Beekeepers Association forum about it. Other beekeepers are seeing it too, and they think dahlia or nasturtium. You can see a lady just popping in through the mouse guard with some below. 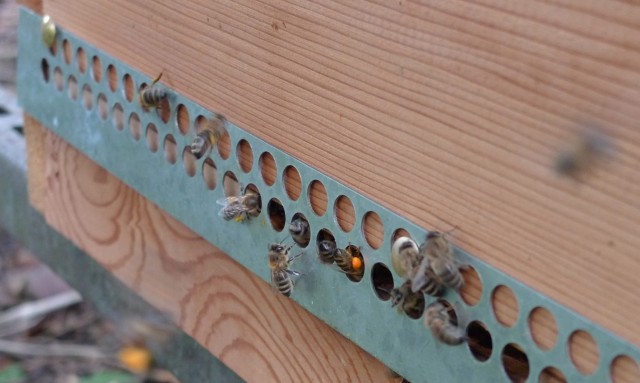 Emma and I opened up our hives on Saturday to check they’re doing ok for stores. Rosemary’s hive, shown below, is almost taking up the whole brood box. They couldn’t really be doing much better. They still have a fair amount of brood, on about 6 frames I think, all worker brood now – it’s too late for drones. Time to kick out their hungry brothers.

We had created a space above the brood box using an empty super and then put another super on top with a few super frames we didn’t harvest. The gap makes them see the super as not part of their hive, so they go up and rob it, storing the honey in the brood box. We want them to be on just the single brood box over winter, which is the convention in the apiary, though I think there are arguments in favour of double brood boxing or brood-and-a-halfing a strong colony. Below you can see the ladies eagerly lining up round a few chunks of honey we cut out from the now otherwise cleaned out super box.

Lavender’s hive, headed by our new young queen, had a month long gap in brood production while Lavender was being created and mated, so they’re still lagging behind on numbers as you can see below. But doing better. Emma’s been feeding them lots and they were waiting at the feeder for us, lapping up every last drop of sugar syrup. Tried hefting and their hive is a little more tricky to lift than the last time I tried. But still doable, whereas my puny arms can’t hold Rosemary’s up.

I think I accidentally crushed one of Lavender’s daughters, she was dragging this orange blob behind her squashed abdomen. Sorry little one 😦  I’m used to seeing the sting itself, which is visible here, but not the orange blob – presumably the bee’s venom sac, which would normally get pumped inside you?

EDIT: willowbatel has pointed out in his comment below that the blob is probably the stomach or other internal organ, as the poison sac attached to the stinger isn’t very big and usually is slightly clear.

The bee below I photographed because I watched her for a while casing out a hive. Back and forth she went along this gap, shoving her head inside but not quite getting her body to follow through the narrow space. An innocent forager would have gone in through the front door, so she was clearly a devious robber bee looking out for a less well defended entrance. A reminder to keep beehives well sealed up. 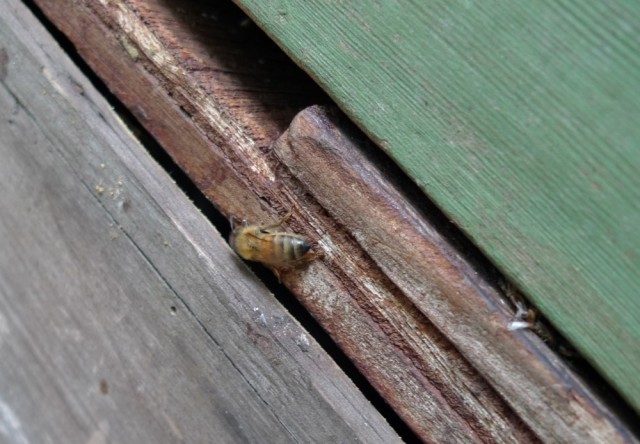 This is not a bee. This is a Bob. He is getting ready for winter too. Zzzzzzz 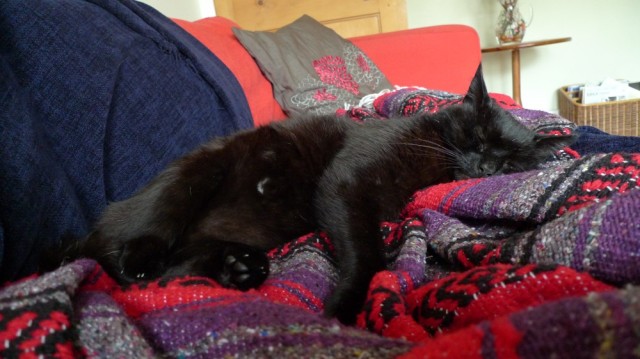 As cosy as a cat