A 4th revision post for the British Beekeeping Association’s Module 1 exam, Honey bee Management, which I’m taking in March. Skipping forward a little again, onto 1.9 on the syllabus:

“The Candidate shall be able to give a detailed account of:-

This is one of the points I feel a little more confident of, because we are lucky enough to have fantastic teachers like John Chapple and Andy Pedley down at the apiary, and they often talk about good hygiene.

Why try to be hygienic? The answer is obviously to try to keep your bees as healthy as possible, and avoid the spread of diseases such as Nosema, European Foul Brood (EFB) and American Foul Brood (AFB). It can also help ensure your honey doesn’t become contaminated in any way.

Here are a few points to consider:

How clean is your bee suit? (Ask me this question and I’ll often start looking shifty). When did you last wash it? Your bee suit should be washed after each visit to the apiary (no, I don’t always do this. But I should). As well as being hygienic, washing your beesuit has the advantage of removing any alarm pheromones deposited by angry bees trying to sting you.

Bee suits can be washed in the washing machine with the veil removed. The more delicate veil can be soaked separately in washing soda, which is a mildly corrosive disinfectant and helps remove propolis. A solution can be made up by dissolving 0.5kg in a gallon of water. 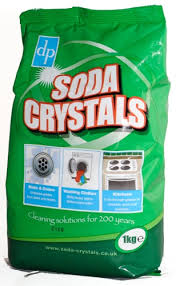 New beekeepers are often sold long leather gloves – resist buying these! These are lovely and soft the first time you wear them, but soon get covered in propolis and become hard and stiff. They are also un-hygenic compared to disposable latex gloves, which are cheap and can even be obtained for free from petrol stations or hospitals (a tip from the money conscious local beekeepers I know!).

If you want extra protection the latex gloves can be worn over leathers. Our local bee inpector often does this.

As you stomp through the apiary you are likely to put your boot in various sticky substances, so it’s a good idea to wash wellies or other footwear in soapy water. (I wish I could say I do this).

(This section has been added following the comment left below by Mike Mack, who suggested talking about beekeepers personal hygiene too.)

Bees are extremely sensitive to smell; indeed smells, in the form of pheromones, are a crucial way of communicating for them. So one way to avoid upsetting the bees and getting a few unwelcome stings in the process is to have a good wash first. But don’t put on perfumes or aftershave. Certain fabrics are smellier than others too – Mike mentions the bees not liking leather or wool in his experience. A plain light coloured cotton beesuit is best.

I like to dab on a little clove oil first as I read somewhere the bees like this smell. It seems to work and has the added advantage that I smell like apple pies all day.

Don’t drink alcohol before you go to the bees. This might sound obvious, but a lot of things that are obviously a bad idea when sober suddenly seem like a fantastic idea after a drink or two. How else do you explain the Irishman who came home after a few beers and decided the early hours of the morning was a good time to try to climb up a ladder with his beehive and put it on his roof? If only he’d known that bees don’t go to sleep..

Good habits within the apiary

Often infectious diseases are spread not by the bees but by the beekeeper, perhaps via a hive tool, or by gloves, or by moving frames between colonies.

Be wary of swarms. As noted in my previous ‘how to begin beekeeping‘ revision post, they may carry disease. Occasionally they may not even be a swarm in the usual sense – bees from colonies infested with varroa have been known to abscond and find a new nesting area.

You can tell when comb is old as it appears dark brown or even black in colour. A good rule of thumb is to hold the frame up to the light; it should be replaced if light cannot be seen through it (Aston & Bucknall, Keeping Healthy Honey Bees). The brood comb below looks pretty old.

In the Ealing apiary we replace all our brood comb each spring, either by doing a shook-swarm or the more gradual Bailey comb exchange. An even more gradual (but not as effective) method is to just replace a few frames each year and colour code your frames using the WYRGB queen marking colour codes to keep track of how old the frames are.

What you’re trying to avoid – the slimy mess caused by wax moth larvae travelling through comb, excreting black mess as they feed. Photo from article by London Honey Shop – “Wax moth infestation – 5 ways to prevent this“.

Emma and I have paper records in the hive, which have the advantage that other people can see what we’ve been doing if we’re away on holiday.  For this year I have purchased a Beecraft ring binder and record card set, which will keep the record cards nicely clean and neat. I like having the blog as an electronic record too, as taking two buses to a dark apiary isn’t too convenient on a cold winter’s evening when I want to remember what I did this time last year.

Does anyone have any hygienic tips they want to share to help me pass my exam? I’d love to hear them.

I am a UK beekeeper who has recently moved from London to windswept, wet Cornwall. I first started keeping bees in the Ealing Beekeepers Association’s local apiary in 2008, when I created this blog as a record for myself of my various beekeeping related disasters and - hopefully! - future successes.
View all posts by Emily Scott →
This entry was posted in Colony management, Exams and tagged hygiene, Module 1. Bookmark the permalink.