They’re finding pollen now!  A sign that the queen is likely to be laying, as pollen is used to feed brood (as well as being eaten by young adult bees). They should have some pollen stores in the frames but they seem to prefer fresh sources. The amount of pollen required to rear a single worker larva has been estimated at 125-145 mg, containing about 30 mg of protein. On average workers collect pollen loads of 16mg (8mg x 2 pollen baskets), so collecting enough pollen to feed just one larvae requires around 8 or more foraging trips.

Foragers are willing to travel further for pollen than nectar, as pollen is a lighter load – although nectar gives them a higher energy return relative to effort. Larvae are mainly fed a brood food liquid from the hypopharyngeal and mandibular glands of nurse bees, but some pollen and honey is fed directly to larvae between days 3-5 of the larval stage (Mark L.Winston, The Biology of the Honey Bee).

I posted the video on the London Beekeepers page on Facebook and a couple of people commented that we should have taken the entrance reducer out over winter, in case piles of dead bee bodies congested the entrance, so perhaps Emma and I should think about doing that next week. I’m not too worried as we’ve been checking regularly for bodies and the entrances are clear.

And crocus flowers are starting to rise hopefully out of the apiary’s mud. Next week perhaps we will see the startling orange pollen the flowers carry inside. 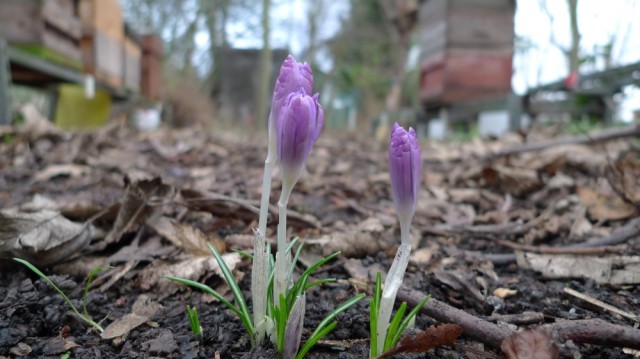 This morning, flowers cracked open
the earth’s brown shell. Spring
leaves spilled everywhere
though winter’s stern hand
could come down again at any moment
to break the delicate yolk
of a new bloom.

The crocus don’t see this as they chatter
beneath a cheerful petal of spring sky.
They ignore the air’s brisk arm
as they peer at their fresh stems, step
on the leftover fragments
of old leaves.

When the night wind twists them to pieces,
they will die like this: laughing,
tossing their brilliant heads
in the bitter air.

I am a UK beekeeper who has recently moved from London to windswept, wet Cornwall. I first started keeping bees in the Ealing Beekeepers Association’s local apiary in 2008, when I created this blog as a record for myself of my various beekeeping related disasters and - hopefully! - future successes.
View all posts by Emily Scott →
This entry was posted in Uncategorized and tagged bees in winter. Bookmark the permalink.

8 Responses to More signs of spring