A day out with John

“What are you doing tomorrow?” John Chapple had asked Emma and me, “Would you like to help me at Osterley?”. Well, when a beekeeping legend invites you down to some hives it would be madness to say no!

Osterley is a National Trust property near where I live, with beautiful gardens which Drew and I like to picnic in. It has ponds, woodland and meadows so is perfect for bees as well as the horses, cows, rabbits, ducks, geese and swans that live there. The hives there don’t belong to John but to a few members of the Ealing association, who had kindly offered to let us make some nucs up from their bees. The nucs will be used to build up the stock in the association apiary, which only had five hives left after winter.

A long distance shot of John with the hives. They are in a lovely sunny spot. As a master beekeeper, John has a fine beard. Emma and I are mere novices so have no beard yet. 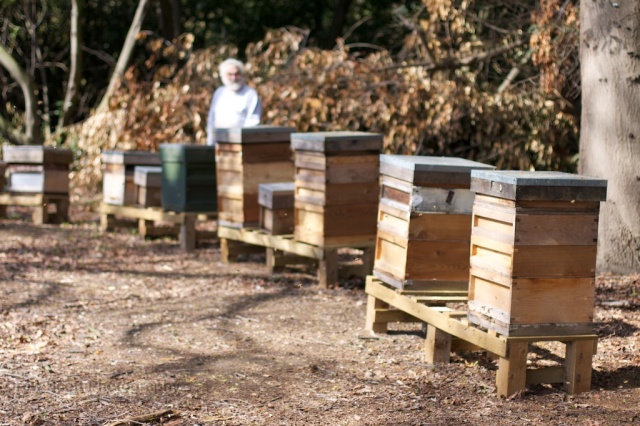 Of course we didn’t have a clue what we were doing (or at least I didn’t anyway) but John patiently directed us. 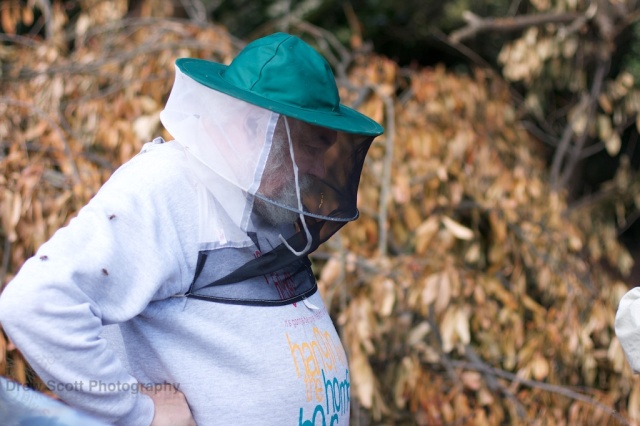 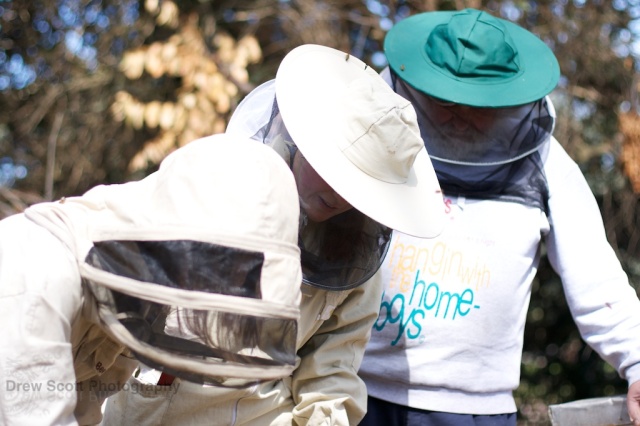 There were six nucs to be made up (nucs = mini nucleus hives, for building small colonies up). We went through each parent hive finding the queen first, then separating her off and putting some brood and stores from her hive into a nuc. John had ordered in some yellow Italian type queens from New Zealand, which recently arrived. One of the little queen cages was put into each nuc, fondant upwards so that any dead attendant bees in there wouldn’t fall on the fondant and block the queen’s exit. The workers will nibble through the fondant gradually to let the queen out, getting used to her smell whilst they do so. 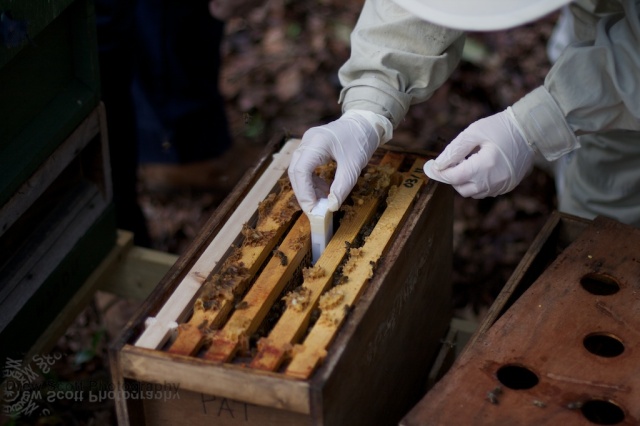 As well as the bees already on the frames, more nurse bees were shaken into each nuc to make up numbers. 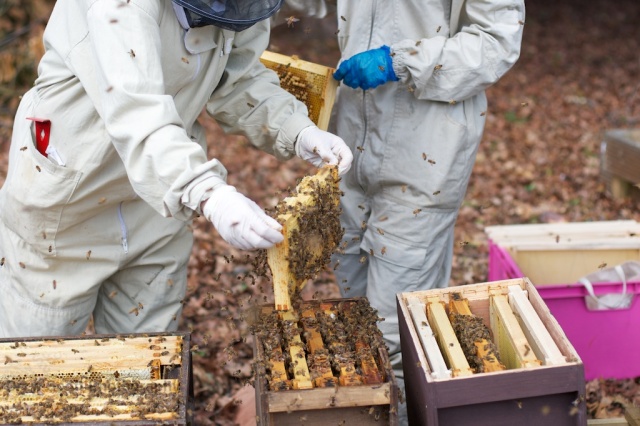 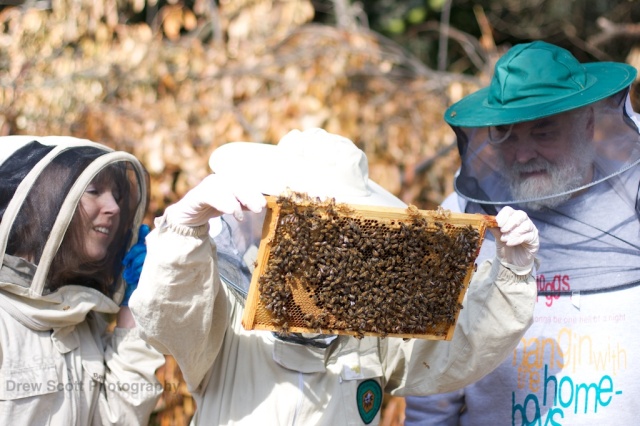 At first we were doing well at spotting queens (all un-marked btw). John even spotted a tiny virgin queen in one hive, and triumphantly pulled another adult virgin out from her cell – calling it “a cesarean birth”! But about four hives in we got stuck. The bees were on a one-and-a-half brood box system. We kept going through the boxes again and again, inspecting the bees at the bottom and sides of the hive too. We passed the frames between each other, triple-checking every single frame. Nothing.

Eventually John came to the conclusion that the hive was queenless, as there were no eggs either. To test his theory, he put one of his caged New Zealand queens in there, to see if the bees would be attracted to her. “If there is a queen in there, she’ll come running over”, John said. No queen came rushing over, but I was surprised at just how quickly workers carpeted the cage, eagerly sensing her pheromones. John decided they liked her, and left her in there. 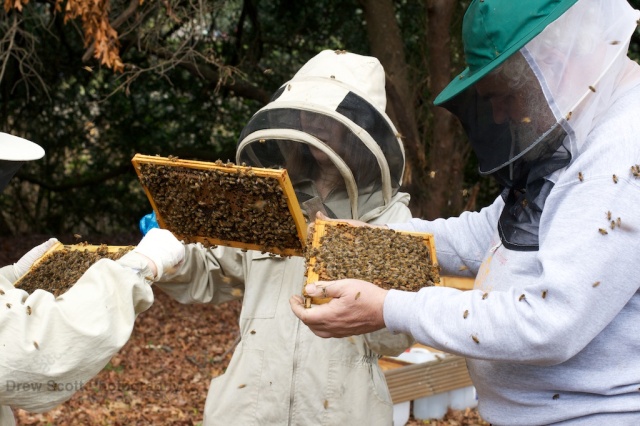 We each got stung once, in the finger. Below is a pic of John just after he got stung. I’m not sure he notices it much by now! 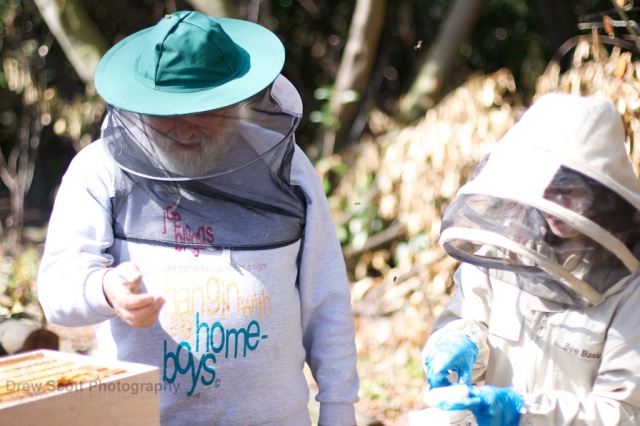 With all the disturbance to the hives there were plenty of workers like the one below with abdomens up in the air to reveal their Nasonov glands, fanning their wings to spread the scent. It’s an aroma used to mark scentless locations such as water or a new colony location. When a virgin queen leaves the hive to mate, workers will mark the entrance with Nasonov pheromone to guide her back. 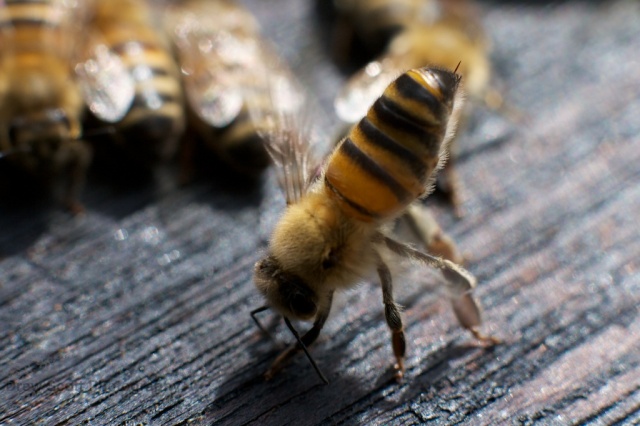 On the first sunny day for ages, the workers were also going mad bringing all sorts of pollen back in. Some was brick-red, so the horse chestnuts must be coming out. 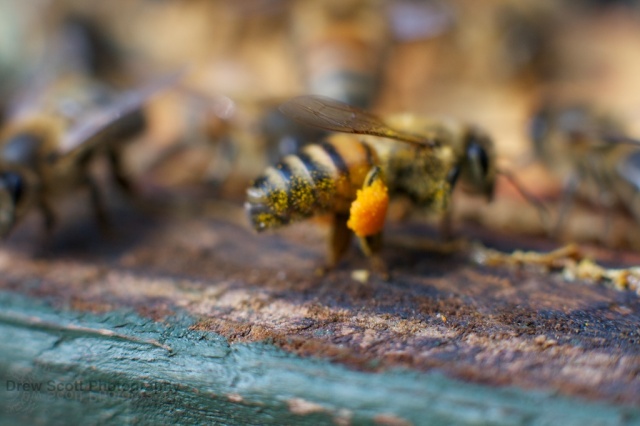 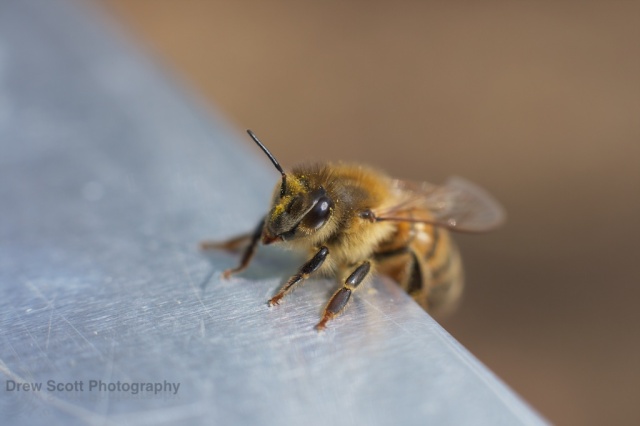 And all the hives had plenty of big butch drones. Swarm season is here! 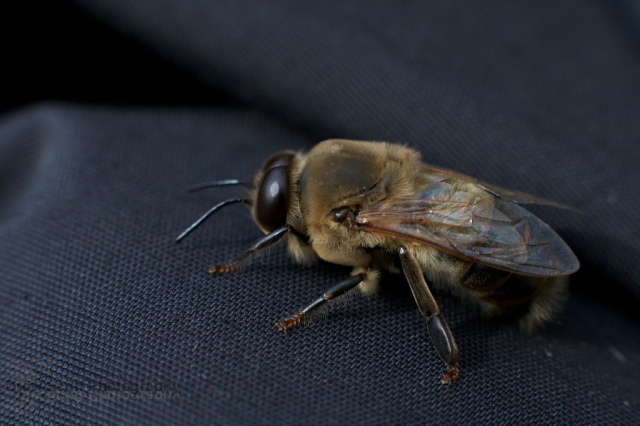 It was a fun morning. Many thanks to Drew for taking the pictures and for waiting whilst we played hunt-the-queen!

31 Responses to A day out with John