A lot of British beekeepers must be feeling pretty fed up right now. After a few days of glorious sunshine, the rain and winds returned. My aunt’s house in Aberystwyth (Wales) was flooded after days of endless rain, so she was left pulling up sodden carpets. Now we seem to be in a pattern of occasional sunshine breaking through, combined with rain and gusty winds, usually all in one day, making it impossible to wear a nice summer dress, because it ends up over your head. The London Brockwell Park Apiary blog sums it up well in their recent post, ‘Everything goes wrong again‘: “For the last month or two, just about everyone I’ve bothered to listen to has been full of tales of queens that vanish, fail to mate, lay drones or succumb to idleness”. Yep, British beekeepers are not happy.

Yesterday was a nice day by this year’s standards, by which I mean that the sun came out occasionally and we had strong winds but no rain. Ealing beekeepers sat around eating cake and drinking tea – Emma and I also celebrated our new queen Ginger with a little supplementary gingerbeer. 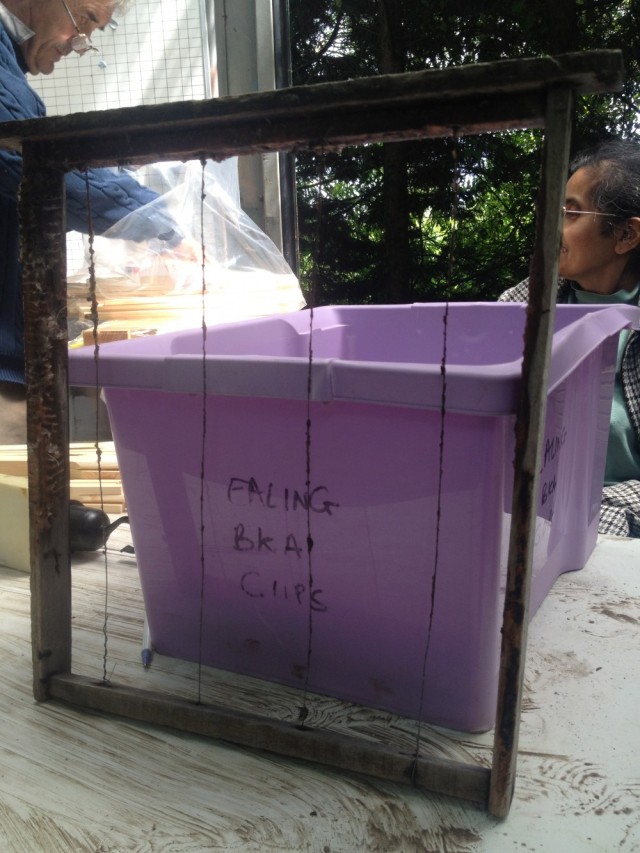 Our apiary manager, Albert, has returned recently after some time away in Spain. He brought back the frame above from a Spanish hive with him (he thinks it’s either from a Dadant or Warre type hive). Isn’t it huge? They must be weight lifters over there. You can see our tea cups box in the background. Each week a nice person with a car takes them home and washes them.

Andy took this year’s beginner beekeepers from the association’s annual course round the apiary, checking on the new nucleuses and topping up their feed. Our National Bee Unit has issued another warning that inspectors are finding starving bee colonies, as the weather is stopping the bees foraging. They have a good advice leaflet on feeding here: National Bee Unit best practice leaflet on feeding bees. 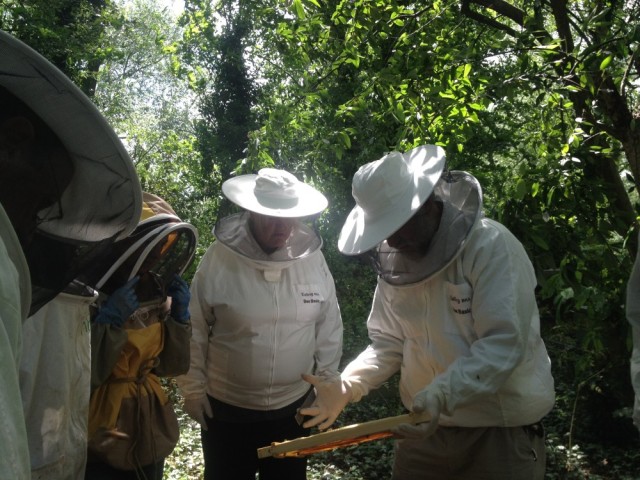 In the photo below the beginners are gathering round Andy as he inspects David’s bees, the moodiest hive in the apiary. They kept their cool regardless and I think will make excellent beekeepers. 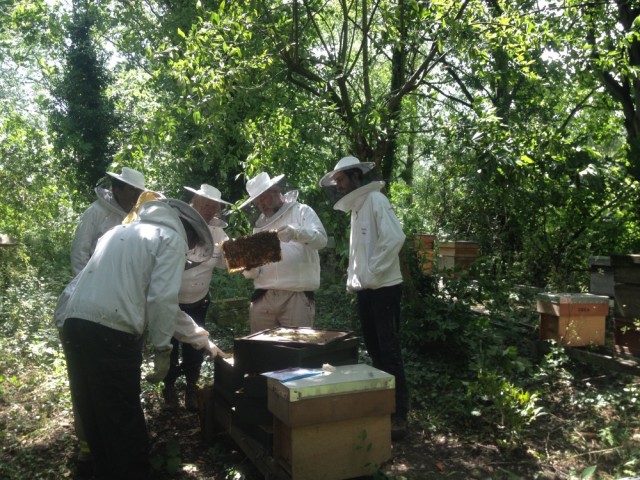 Emma and I checked our two colonies… Ginger appears to be laying a lot of drone brood, including in the centre of the brood frames, which is a bit worrying. We spotted her, so it’s not a case of a laying worker. And she’s a New Zealand queen bought by John Chapple this year, so she should be properly mated. We’ll need to keep an eye on that. Luckily Neroli is laying like a star, just like her mum and gran did – frames packed with digestive biscuit colour brood. I’m confident we can build her colony up into a good size for winter, but not expecting any honey this year.

There was an interesting article in the Evening Standard this week, ‘Celebrity beekeepers told to buzz off‘. It’s an interview with the forthright Angela Woods, Secretary of the London Beekeeping Association, who warns that there are too many bees for the amount of forage in this city. She’s also concerned about the trend for businesses to site hives on high rooftops, where the bees have to spend a lot of energy flying up and down.

I sometimes wonder whether by being a beekeeper here I’m doing more harm to bees than good. Until fairly recent history the people of London have been rampaged by a series of disease epidemics – bubonic plague, smallpox, cholera, tuberculosis. Anywhere where large numbers of people gather together is a risk factor, and bees are no different. Emma and I obviously try our best to look after our bees and keep parasite and disease levels down, but of course the more colonies there are in an area the quicker diseases spread, due to worker drifting and drones paying visits to other hives.

Bees being inspected in an Omlet Beehaus hive on a roof, photo from thebeatthatmyheartskipped.co.uk blog

Unfortunately, more and more people taking up beekeeping isn’t the answer to help bees, because it results in lower honey yields per hive and the bees having to work harder to find the nectar and pollen. And what about the struggling native bees living here, the solitary and bumble bees, who are having to compete for a limited amount of forage with ever increasing armies of honeybees? Are city beekeepers like me doing more harm than good? Would be interested to hear people’s opinions.

52 Responses to The lost British summer