Lots going on down at the apiary this weekend. Mysterious objects to identify, tea to drink, cake to eat, gossip to catch up on…

What, for instance, is this? 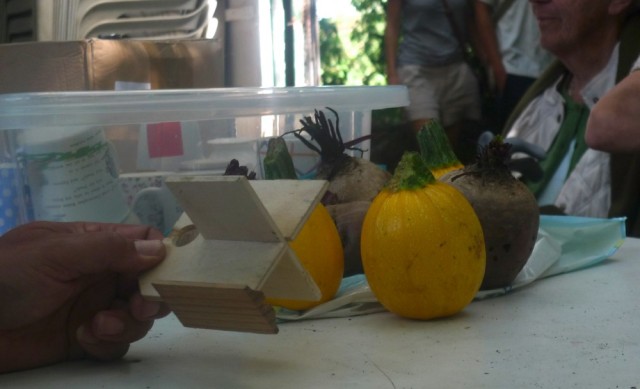 John Chapple brought this object back from his travels abroad. He said the old beekeeper who gave it to John was disgusted that he didn’t know what it was (I suspect the old beekeeper didn’t know either!). There is a prize of a jar of marmalade for anyone who can identify it for John. The piece of wood which slots in next to the round hole is removable. Emma has a close-up pic of it here: http://twitpic.com/auwyfw.

It was a nice day for inspecting, below is Emma holding a frame. We have finished the Apiguard treatment now, so we removed the trays and checked the monitoring board for fallen mites. I could only see about five, which does seem suspiciously low, but then this colony has had several breaks in brood this year, what with a swarm occurring and queen troubles. A break in egg laying and brood production gives varroa less opportunities to reproduce, so between that, the oxalic acid and Apiguard, we should be okay. 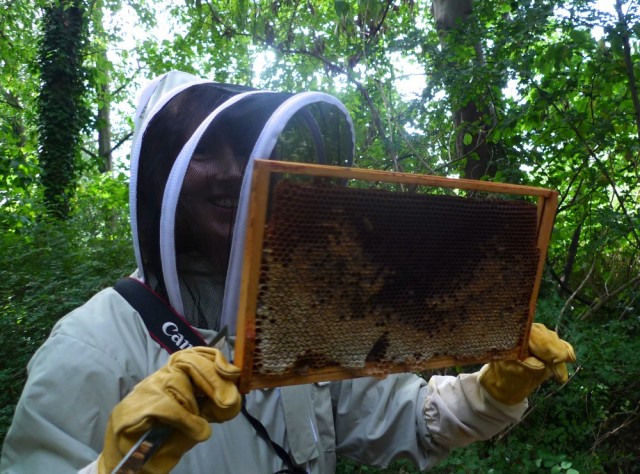 The nights are drawing in more quickly. Soon it will be too cold to inspect, and it will be time to put the bees away for winter. No more holding up brood frames, just peeking in the top occasionally to top up feed and in December to do the oxalic acid treatment. Several months of waiting before the joy of the first spring inspections.

But for now we still have sunshine and warmth. I found this bee in the walled rose garden at Walpole Park, Ealing. I adore the smell of roses and find it very frustrating that as soon as I remove my nose from a rose the scent is lost to me, merely a gorgeous memory. I envy this bee for being able to spend time crawling inside its petals, enveloped by the intoxicating aroma.

In another part of the park I had an encounter with this White-tailed bumblebee (Bombus lucorum). We found her crawling on a concrete path, moving about slowly. One of her legs seemed to be missing. I thought that even if she was literally on her last legs, being stepped on would be an unfitting end for this magnificent creature. I attempted to pick her up with a leaf, but she had other ideas and crawled on my hand.

She felt soft and warm. I have read that bumblebees can inflict quite a nasty sting, but she did not seem at all likely to sting me. I carried her around the park trying to find somewhere suitable to leave her, and eventually chose this bush of blue flowers (kindly identified by Christina in the comments below as Caryopteris), which was being enthusiastically bombarded by common carder bees. To my surprise she perked up at once and crawled off my hand to begin feeding. Even with only five legs she seemed to hang on to the flowers and hopefully regained some energy!

A couple of lovely blog posts I’ve come across this week:

Bees of Slovenia – amazing photos of Slovenian hives, which are elaborately decorated with religious and cultural iconography, I love the naughty devils trying to steal honey from the villagers!

“In the Slovene language there is a verb to signify the death of a human. This word is shared only with bees. For all other creatures there is a separate word. Here in a little country in the Balkans, the life of a bee is respected just as the life of a human.”

What’s going on behind that capped cell? – wonderful and quite eerie photos of a developing larvae, she has perfectly formed antennae and legs but is still a translucent white colour.

20 Responses to Winter is coming