Yesterday I went to the Federation of Middlesex Beekeepers’ Associations annual ‘Bee Keepers’ Day‘. Each year the Middlesex associations (Ealing, Enfield, Harrow, North London, Pinner & Ruislip) take it in turn to host a day of beekeeping talks; this year the day was held in Muswell Hill, North London. Below are my notes from the first speaker.

Graham Royle, beekeeper from Cheshire. ‘Apis through the looking glass’ – a look at what we really see in the beehive.

Graham has been beekeeping since 1988 and started to study for the BBKA examinations in 1995 when he decided he wanted to know more about the bees he was keeping. His studies resulted in achieving the BBKA Master Beekeeper certificate in 2002 and the National Diploma in Beekeeping in 2004 (the highest beekeeping qualification recognised in the UK). He was also awarded the Wax Chandler’s prize in 2002. Not bad, huh?

This talk was absolutely fascinating. I was left blown away by Graham’s drawing, dissecting and photography abilities. He is also a hugely inventive man in a very practical way, with a background in electronics.

Beekeepers tend not to look closely at individual bees whilst inspecting (with the exception of the queen, of course). We are too busy looking at the combs, checking for eggs, worrying about queen cells, marvelling at pretty pollen etc. Few of us take the time to really look at the workers properly and think about how their bodies function. Below are some of the insights that Graham shared with us. 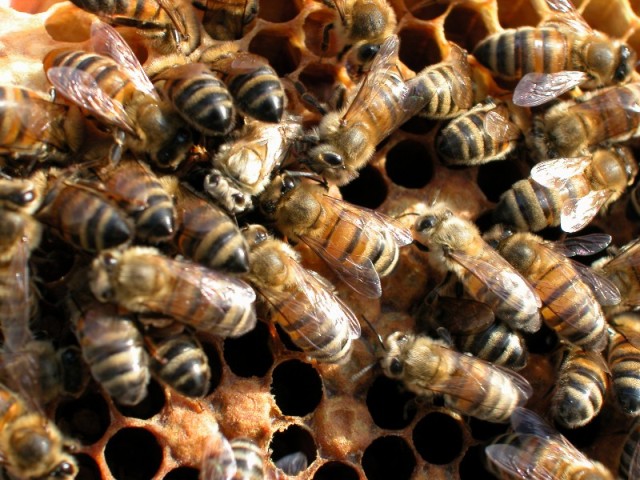 A bee’s senses are mostly located on their head. Their antennae are segmented and covered with sense cells. Through these, they can measure humidity and levels of carbon dioxide in the air, as well as detect pheromones and other smells.

The antennae up close, with the segments visible. This newly emerged bee has just used her mandibles to cut through the wax cap covering her cell. Image by Eric Tourneret, from thehoneygatherers.com.

They regularly clean their antennae with their front legs, using a built-in ‘antennae cleaner’ notch in each front leg. The small, pointy flap part of the notch is called the ‘fibula’ – this closes off the circle of the notch and little hairs in the formed circle brush dust and debris off the antenna as the bee pushes it through. Rusty at HoneyBeeSuite has a fabulous photo of this happening on her blog: Keeping antennae shiny and clean. 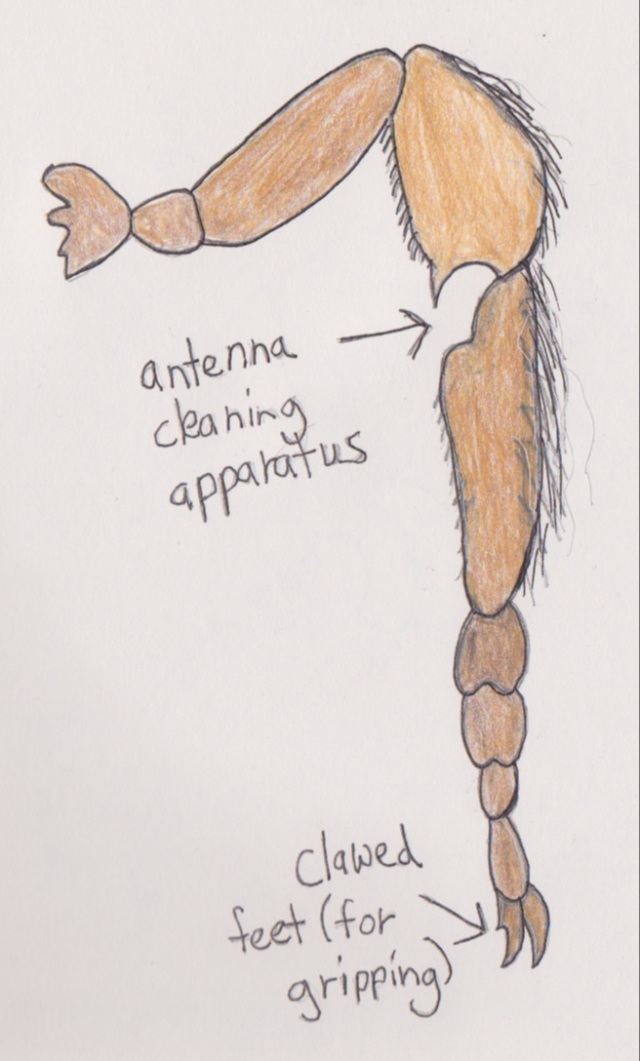 Honey bee front leg – drawing by me, based on diagram from ‘The Honey Bee Inside Out’, by Celia F. Davis.

As well as the obvious two eyes, bees have three small, simple ocelli eyes on the top of their head. No images can be seen through these eyes, but they can detect light levels. One theory for the positioning of the three eyes is that they help the bee work out if it is flying level horizontally or tilted to the left or right.

There are around 6,000 individual light sensors in each of the two compound eyes of a honey bee. As the eyes are rounded, each sensor is looking in a slightly different direction. Each sensor is covered with a lens …which has a spookily familiar shape…hexagonal, like a honeycomb. So the bees have 6,000 honeycomb shapes in each of their eyes. Hexagons are an efficient shape for packing a large number of elements into a small area, whether honey cells or eye lenses.

Image by Eric Tourneret, from thehoneygatherers.com. This is a Honey bee eye magnified 270 times. At the corners of the hexagons hairs sprout out – bees have very hairy eyes.

Bees are likely to see in lots of hexagonal coloured squares – their vision is much less acute and detailed than ours. It probably consists of lots of very coarse pixellated shapes, with flowers appearing as coloured patches. If you’ve ever been wearing bright clothing in a park and watched a bee fly around you inquisitively, it’s probably trying to work out if you are a flower.

However, with so many individual sensors their vision is much better than ours at detecting motion. A good reason to move slowly and calmly whilst around your bees.

Image by Eric Tourneret, from thehoneygatherers.com. As drones’ eyes are much larger (for spotting the queen during flight), the ocelli are pushed further forward on their head. Here you can just make out the outline of the three ocelli between the two massive eyes of the drone.

Image by Eric Tourneret, from thehoneygatherers.com. I find it easier to understand the underlying form of a bee by looking at developing larvae. Note the rounded thorax, the segmented abdomen, the large area of the compound eyes and the dots of the three ocelli eyes on the top of the head.

The thorax of a honey bee is roughly spherical and packed with muscles. It would be logical to assume that the wings are attached to muscles, but this is not the case. In fact one set of muscles run from the top to the bottom of the thorax and another set run horizontally across the thorax. The two sets take it in turn to contract during flight, indirectly causing the wings to move up and down. I suppose it would feel like us moving our arms by bobbing our torsos back and forwards? Hard to imagine.

Bees have four wings – if you are trying to work out whether an insect is a bee or a fly, look at the wings closely. During flight the front and back wings of a honey bee become hooked together; this is achieved by about 30 little hooks on the top edge of the hind wing gripping into a groove on the base of the front wing. The hind wing is then dragged up and down by the front wings (see Dave Cushman’s diagram ‘The Legs and Wings of Honey Bees‘).

Image by Eric Tourneret, from thehoneygatherers.com. The bee’s muscles allow it to flap its wings 400 to 500 times per second, to allow a speed of 25 to 30 kilometers per hour with its maximum payload.

Bees comb as much pollen off their body as possible using their basitarus, a part of their legs which has rows of spiny hairs that act as in-built hair brushes. There is a spot on the middle of the back that bees can’t quite reach, with results in Graham getting calls from new beekeepers worrying that their bees are going mouldy, at the time when Himalayan Balsam is out!

The pollen baskets are fringed with hairs that help pollen stay in, and the bees also moisten the pollen with a bit of nectar to help it hold together. They don’t manage to get all the pollen from their body hairs, so some is left to pollinate the next flower they land on. 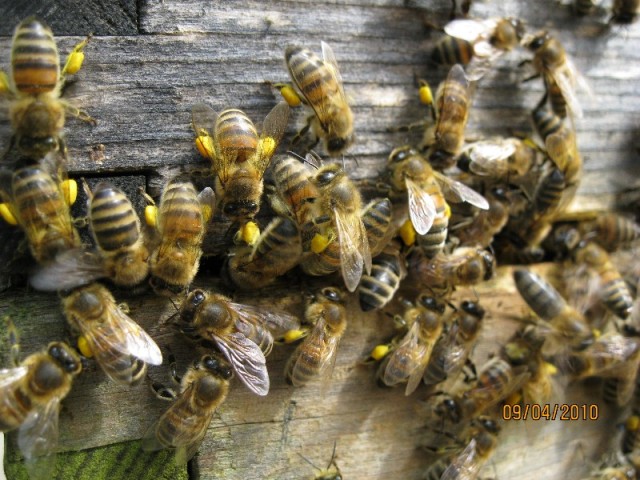 The mouth cavity of a bee is elastic. From the mouth, food they ingest moves through the oesphagus into their abdomen. Initially food will be held in their crop (honey stomach), so that the bee can carry nectar home, rather than instantly digesting it all. The crop can stretch to carry a heavy load (the average when foraging is 40 mg, a bee weighs about 100 mg).

A proventriculus valve in the honey stomach can let food through to be digested or keep it within the crop. So honey is not bee vomit as some people like to say, because it has not been into a digestive stomach!

My drawing below shows what the small intestine and ventriculus look like when pulled out, which Graham can do when dissecting. The malpighian tubules do the job of our kidneys,  absorbing water and waste from the surrounding haemolymph (equivalent of our blood). 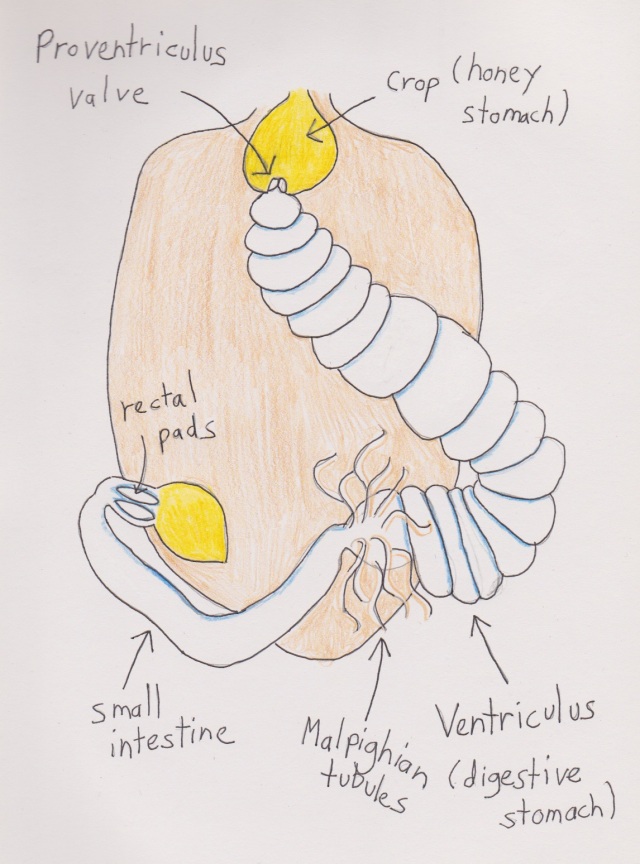 Bee digestive system – drawing by me, based on diagram from ‘The Honey Bee Inside Out’, by Celia F. Davis.

After pollen is digested, the outer husks of pollen grains pass through into the bee’s rectum and accumulate as yellow waste products. The husks are virtually indestructible, lasting thousands of years, which is why they are often used in forensic science and archaeology.

There are six of the rectal pads shown above in the rectum. These are thickened areas of the wall of the rectum, which show up as white elongated structures when dissecting. They are involved with moving water and other dissolved substances out from the rectum and into the bee’s haemolymph.

The rectum can expand significantly to fill almost the whole abdomen during winter, whilst the bees are clustering tightly and feeding on their honey stores; meanwhile the crop will shrink as the bees are digesting the honey immediately, not storing it for later regurgitation. In summer the reverse happens – the crop of the bee expands as the bee collects nectar, but the rectum shrinks because the bee has daily cleansing flights. So the abdominal space is used neatly, making the most of the available space depending on the season.

Queens contain specialised reproductive equipment within their long, tapering abdomens. Rows of eggs are in constant production, with queens typically having around 150-180 ovarioles (egg tubes) in their two huge ovaries. Glands by the side of the spermatheca nourish the sperm that a queen collects during her mating flights and keeps them alive for 3-4 years after mating. Amazing when you think about it.

A laying worker has tiny ovaries and can only produce 2-12 eggs at a time, compared to the 150-180 that a queen can. Of course she also has no spermatheca, so cannot fertilise her eggs and can only lay drones.

Graham accompanied his talk with fantastic drawings and photos from his dissection work. Some of these he had animated, for example to demonstrate the action of the thorax muscles during flight, or the mechanism of the pollen baskets. To dissect he uses freshly killed bees anaesthetised with methyl acetate – rather than frozen ones, which he finds become mushy afterwards. He only takes one or two bees at a time.

It’s easiest to dissect bee internal organs under water (the bee should be under water, not you!), to support the organs once the external exoskeleton keeping the organs together has been removed. Graham showed us a short video of him cutting incredibly neatly around the abdomen with small scissors and a scalpel to reveal the organs inside, and then snipping off the spiracles and malpighian tubules attached to the organs. I imagine if I tried the poor bee would soon become pretty mangled.

Graham finished by telling us that his presentation was dedicated to the six workers, drone and queen that contributed to the making of the slides!

His book containing his illustrations and explanations of bee biology, ‘Apis through the Looking Glass‘ (2010) is available online from a few different places, such as Thornes, Northern Bee Books, Amazon etc. You can preview the first fifteen pages of it at blurb.co.uk/books/1274866-apis-through-the-looking-glass.

I am a UK beekeeper who has recently moved from London to windswept, wet Cornwall. I first started keeping bees in the Ealing Beekeepers Association’s local apiary in 2008, when I created this blog as a record for myself of my various beekeeping related disasters and - hopefully! - future successes.
View all posts by Emily Scott →
This entry was posted in Bee biology, Honey. Bookmark the permalink.

31 Responses to Bee Keepers’ Day – Apis through the looking glass