First inspection of the year

One of the unexpected consequences of taking up beekeeping – and only being able to visit the bees on a weekend – has been developing an obsession with the weather. During the summer months I jump on the BBC website as soon as Tuesday comes, to inspect the five day forecast. Sometimes on Tuesday sunshine will be predicted for Saturday, but that sunshine turns into clouds or rain as the week progresses. Other times rain will be expected, but as Saturday comes closer a sun will miraculously appear. It keeps me on tenterhooks I can tell you.

This is this week’s forecast: summer is here at last!

Yesterday was certainly full of surprises. I left the house to go and visit the local farmers market at about 12pm, only to find the kind of rain coming down that clears the streets, because people are afraid to leave their homes. I pushed my hair back under my waterproof and listened to the drops pounding down on my hood. By the time I reached the market the rain cleared, but all the plants and vegetables were dripping. I was convinced the day was a write off for beekeeping. Yet later on, by 2pm, the rain had cleared, sun came out and the day turned all lovely.

When I arrived at the apiary, everyone was standing watching a gentleman on a ladder constructing a bigger roof for us to meet under, as more people are visiting each week than ever. How many beekeepers does it take to put up a roof? One to do all the work, plus twenty to drink tea and watch. 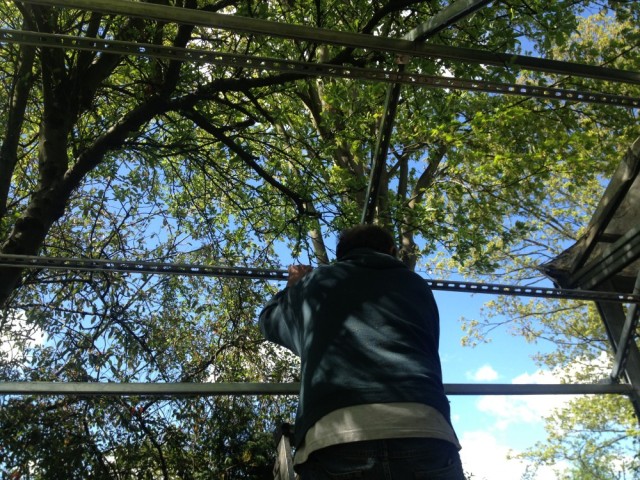 After a cup of tea and a chocolate brownie, I watched David Pugh, an experienced Welsh beekeeper, go through his colony. As usual his dark, moody bees were doing well – I’ve never known those little buggers not get through a winter.  “Why is there still fondant on the hive?” someone asked. “Because I haven’t taken it off yet” David replied. 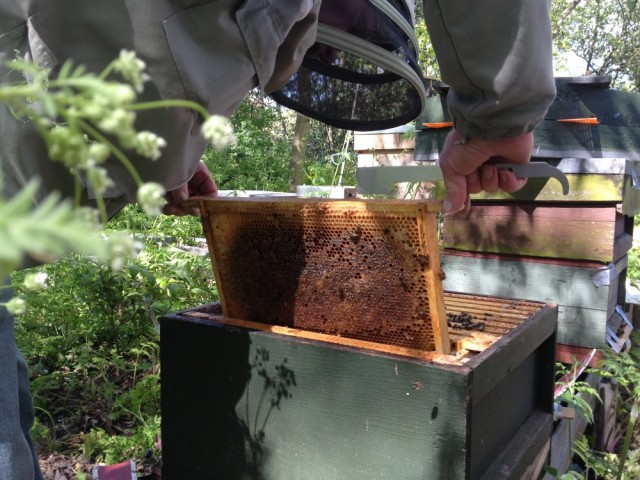 Things were not so positive in the hive next door inhabited by yellow Italians (imported from New Zealand), which appeared to have a spider problem. Lots of bees had died tangled up in cobwebs, and there was very little brood. Last week we’d seen wasps going in – weak colonies struggle to keep pests out. “Focus on building them up for the winter” David recommended. “You’ll never get any honey out of them this year – unless you’re exceptionally lucky.”

After that, I watched Thomas inspecting Ken’s hive. Ken had already tried earlier that morning, but without gloves on. The bees (headed by a queen raised from eggs from David’s fiesty bees) had beaten him back by stinging his hands repeatedly. So Tom was wise to have thick gloves on for the second attempt! Here you can see him showing the others the queen. 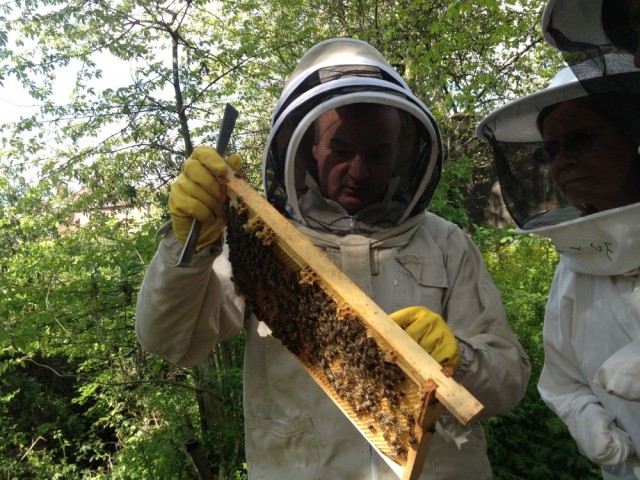 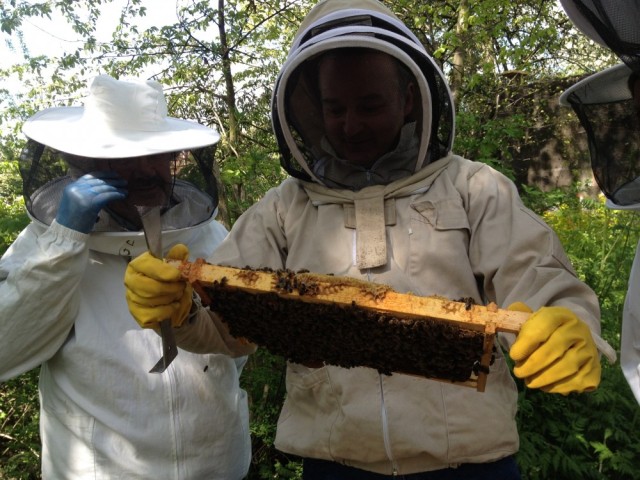 Below is Albert inspecting. These bees came from a captured swarm last year. They seem to be doing okay and the queen was spotted, a large beauty. 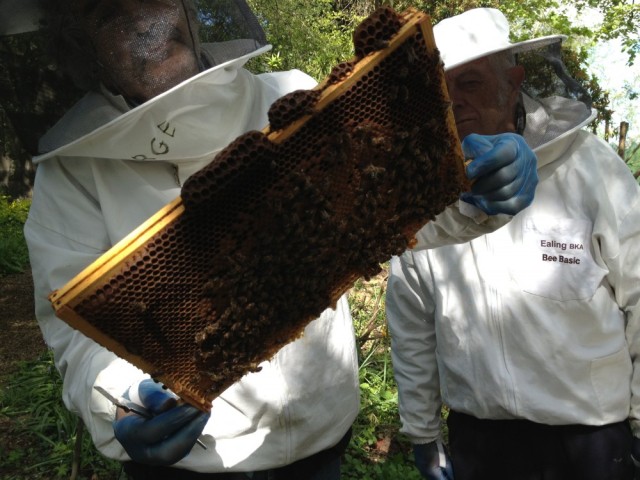 After watching everyone else go through their hives, I was excited to be able to delve inside our two colonies for the first time this year. A small audience was there to watch and help, including a cartoonist from Private Eye, looking for inspiration for his regular comic in there. Our newest hive, which we bought recently from another Ealing beekeeper, was absolutely bursting. The bees had not gone up to start drawing out foundation in their second brood box for the Bailey comb exchange yet, but they had packed every spare centimetre of their hive with comb.

As I eased the sticky frames out, layers of drone comb were falling off the bottom. At one point I had to reach my hand into the bottom of the hive to fish out a particularly large dislodged piece, which would have been hard for the bees to remove on their own. Luckily I got no stings, despite wearing thin surgical gloves which had split at the wrists. Upon inspecting the purple eyed drones, no mites were spotted.

Our other, older hive with our lovely ultra gentle ladies was not so full of bees, but still had enough brood, pollen and honey stores. Our quite orange queen was spotted – she’s on the small side, but seems to be laying fine. I was a bit worried to see some smaller than usual workers – with developed wings but tiny abdomens – could this be due to the workers being weakened by varroa whilst developing?

The Private Eye cartoonist was interested in hearing our views on the two-year EU neonicotinoids ban. He had not heard of varroa mites and was surprised that they are such a problem for beekeepers here. There has been a lot of publicity about bees recently – they even featured in both Have I Got News For You and QI this week – but there are so many issues involved in bee health that I think it’s hard for the general public (or indeed beekeepers) to have a clear idea of all the factors involved.

Drew cycled to the apiary to meet me and we walked part of the way home together. We stopped to watch a game of bowls – another very weather dependent sport. The bowlers were all dressed very smartly in white with cream jumpers, like cricketers. It’s a game of skill rather than physical exertion. The sky above is pretty and the bowlers must have been pleased to have a sunny day to play on. 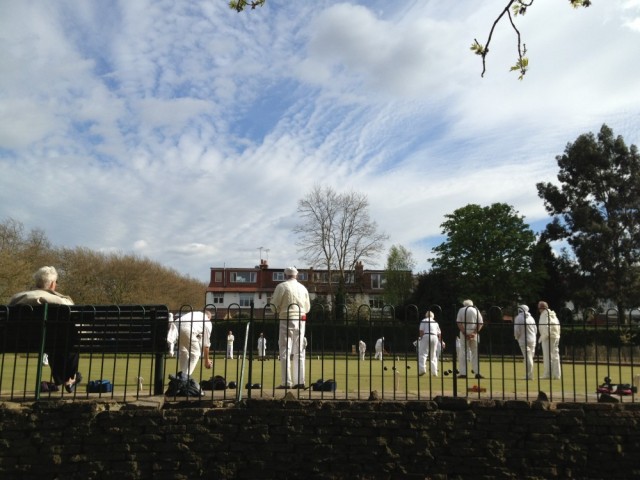 29 Responses to First inspection of the year