The arrival of some slightly warmer weather and occasional sunshine is the cue for the wild flowers of Ealing apiary to shoot upwards. Here you can see a swarm catcher dangling amidst a sea of white and green.

The bees are expanding fast too. Today I went to see our new hive in Hanwell – the bees have kindly been donated to us by Ian, a nice Ealing beekeeper. This was the scene when I lifted the crownboard… 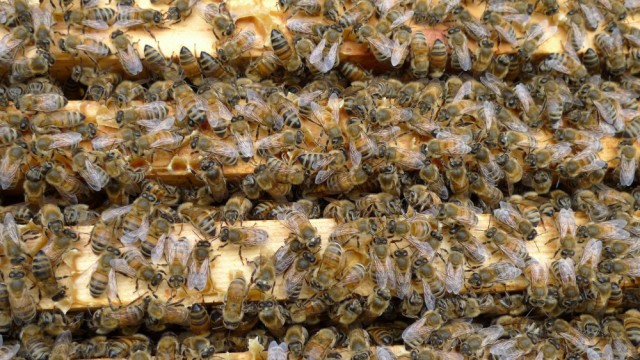 Each frame is fully drawn out, right down to the dummy board. My smoker went out quickly but apart from a couple of puffs at the entrance I managed to inspect the hive without smoking them. Occasionally a couple of bees buzzed round my head, but despite only wearing thin latex gloves I received no stings. Since I started I’ve gradually learnt that swamping the bees in smoke isn’t necessary. I saw the queen and no queen cells, which was a relief.

Emma and her dad had left a super by the hive earlier this week, which was a big help. I put a queen excluder and the super over the top, so that the ladies can start storing honey up there and free up space for the queen to lay.

Song for a new super, set to the tune of Missy Elliott’s Get Ur Freak On…

Bees be putting it down, fill your stomachs big and round
New combs around, y’all can’t stop eating
Now
Listen to me now, y’know you can do twenty pounds
And if you want that sweet nectar then come on get it now
(YES)
Is you with me now (YES) then buzz buzz buzz it now
(SWEET!!) Bees fly around (YES)
Now honey gathers round, now beeks jump around

Last picture – a dead, disintegrating drone I found on the ground. The tiny hooks that hold the wings together in flight have become disengaged and you can clearly see his four wings. For all his big eyes and muscles he never reached a queen.

30 Responses to Springing into action