Over the past few weeks I have had a very special visitor. He goes by the name of Flat Stanley. As suggested by his name, he’s a slightly unusual visitor, in that he’s not just slim but 2D.

See what I mean?

This might all seem somewhat eccentric so far, but there is a reason for this, honest. See his beautifully drawn cowboy boots? Flat Stanley is actually visiting from Texas! He’s been sent for a stay by beekeeper Karl Arcuri, whose niece Riya created him as part of the Flat Stanley literacy project. Flat Stanley is now doing a tour of the world, and I am lucky enough to be the first beekeeper to have him.

Stanley fell lightly through the door with a letter which said:

Thank you for hosting me in your lovely country. While I can’t wait to visit some English beehives, I particularly look forward to the tea and cake. Please note I prefer an Assam blend, but any strong black tea will do. Clotted cream is also a must since it is impossible to find in the United States. I hope the bees are in good health and good spirits.

Many thanks
Flat Stanley

After a spot of tea, to celebrate Stanley’s arrival I took him to meet my bees…

And to frolic in buttercups…

And to meet other beekeepers. 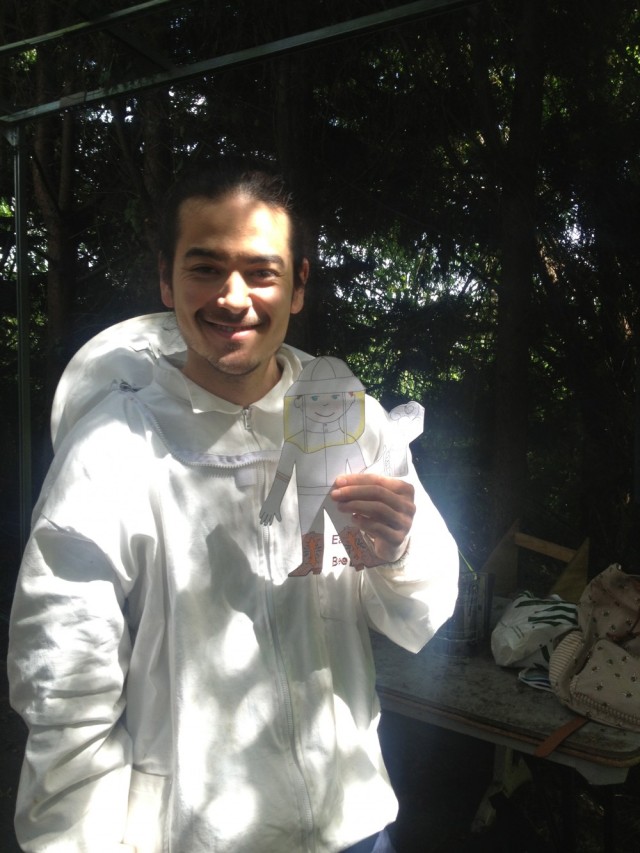 Karl asked if I could share some interesting facts about beekeeping in my country. Well, I would sum up beekeeping here as “tricky”. Since varroa arrived, gone are the days where a beekeeper could check on their hive once or twice a year and take away a few supers of honey each summer. A new pest is on the horizon too – the bee-eating Asian hornet, Vespa Velutina, has reached northern France after its accidental French arrival in boxes of pottery from China in 2004. A strong hornet queen could fly across the channel, or more likely be unwittingly transported here by humans. We must watch out for it.

For now, varroa combined with the constantly up-and-down weather are probably the biggest challenges here. Sometimes, as today, we get a beautiful day or a run of a few beautiful days of sunshine. But there is the constant knowledge that the rain and cold dull days may return at any moment, even in the middle of summer. Ah well, no-one lives here for the weather!

I believe Flat Stanley is off to sample the delights of the Isle of Wight next. To find out more about Flat Stanley and how he can visit you too, see Karl’s blog: