For the last few weeks it feels like I have been living in a country that is not England. A dream world where I haven’t needed an umbrella for weeks at a time, where my 7am walk to the bus stop has felt warm enough not to wear a coat, and where sandals and shorts can be worn. Never have I known a summer so hot. I have genuinely enjoyed the heat, but I did want rain to come for the sake of the plants, and for the bees. Eventually the sky burst and the deluges came, bringing some relief to the parched grass.

Late July is a time of yellow, purple and pink, of ragwort, thistles and rose-bay willow herb. The hogweed has shrivelled up into dry seed pods and the bramble flowers are turning into blackberries already, so it’s lucky we have the thistle family. 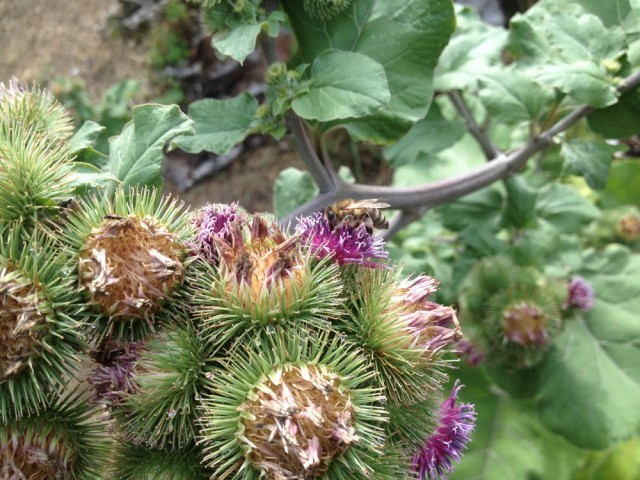 The internet tells me there are around 20 different species of thistle native to the UK. I certainly can’t identify them, but I can look around and see that the purple spiky flowers in the park come in different shapes and sizes. Theresa at Everyday Nature Trails has done a great post on some different types of thistles: Pretty prickly thistles.

I think this type of thistle may be the burdock, the root of which has traditionally been used to make the British drink Dandelion and burdock. 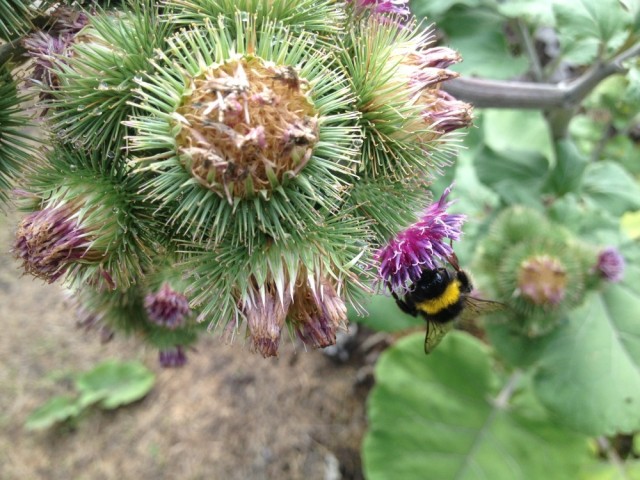 These are tough, sturdy flowers, capable of supporting the weight of the largest bumble bee foragers. 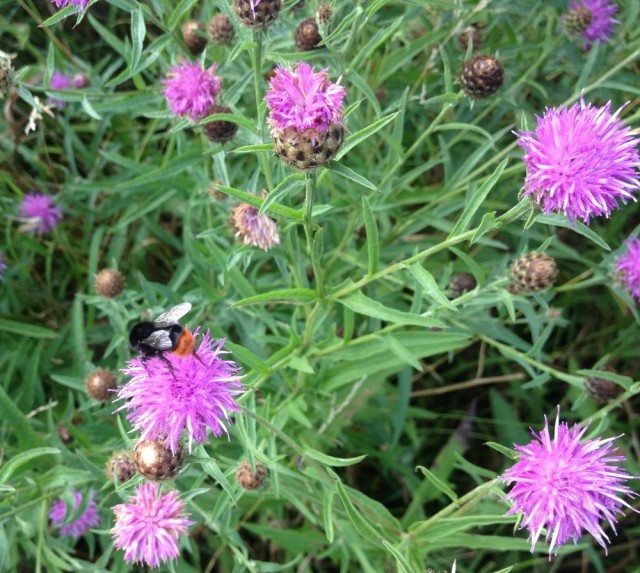 These flowers are daintier and I believe may be , being visited here by a Red-tailed bumblebee, Bombus Lapidarius. Helpful commenters have revealed that these  little purple flowers are actually knapweed, part of the same family of plants. Mark says that “Thistles like rich fertile soil whilst knapweed thrives on nutrient poor soil”. 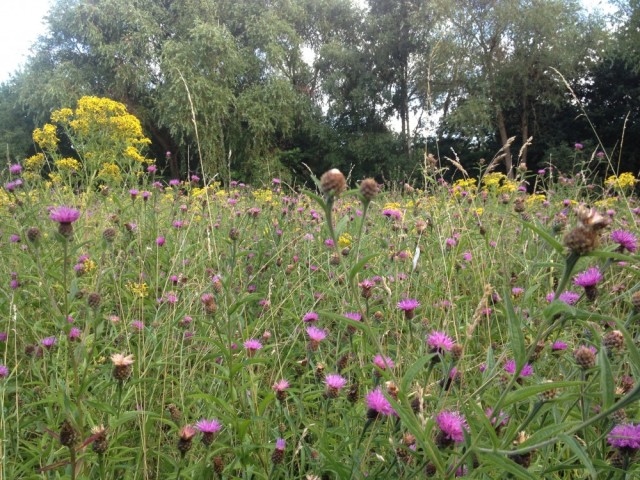 I found a humming field of these knapweeds and ragwort. The yellow and purples together, with red-tailed bumblebees darting everywhere between them, was a marvellous sight.

Ragwort has other common names – ragweed, staggerwort, stinking billy, stinking weed or yellow weed. It can be fatal to some grazing animals, such as horses. 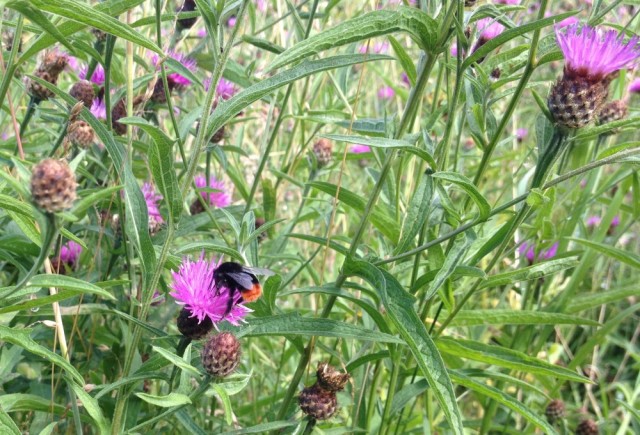 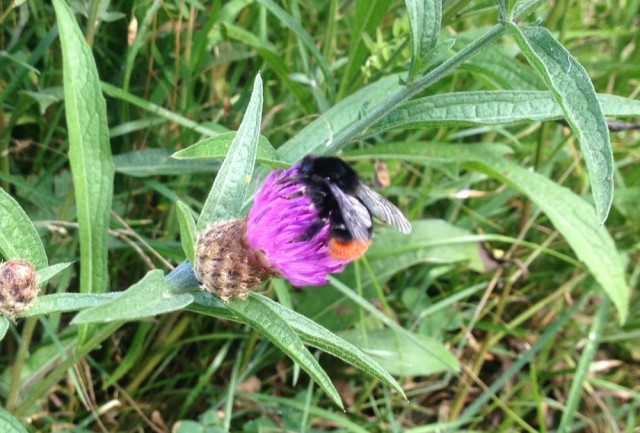 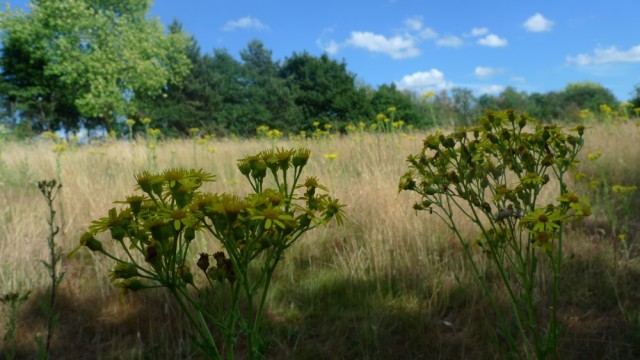 With so many thistles and knapweeds to visit, the seemed to be under appreciated this year, but I still observed a few bumbles hanging on to its pretty pink flowers. Mark has left me a comment to say “Your willow herb is actually hairy willow herb and not rosebay willow herb – differences in growing habit and flowers but noticeable hairy leaves and stem”.

Rosebay willow herb itself is a well known bee plant which provides both pollen and nectar, producing very pale, almost water-white honey (info from ‘Twelve months of forage: Plant list for talk’ by Andy Willis,  included in Reading Bee Keepers Association’s March 2013 newsletter – scroll right to the end of the newsletter for the forage chart). 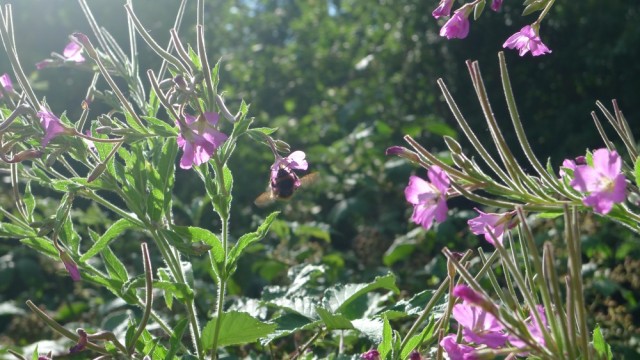 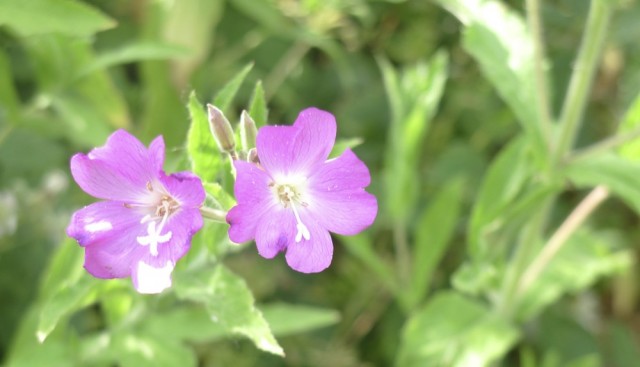 Proof that flowers for bees are not tricky to grow. They grow just fine on waste ground and fields, without needing any fertiliser or nurturing. They are just the local wildflowers that spring up in your area, anywhere they can find that’s not concreted or mowed over.

Entranced by the flurrying of bees on thistles, I stayed longer than intended on my walk. I had a lemon and poppyseed cake in the oven, and it was due to come out.

Whilst hurrying back, I had an unexpected encounter. A large bee was crawling slowly across the concrete footpath in the more formal part of the park. I recognised her at once as a Queen buff-tailed bumblebee, her tail a darker buff colour than a worker’s would be.

Concerned for her health, I put my hands down in front of her and she immediately climbed on, as gentle and trusting as could be. I carried her about 100m to a buddleia bush; she eagerly dismounted onto the purple scented flowers and began drinking nectar enthusiastically. Hopefully this helped her regain enough energy to fly. A lovely meeting – and my cake was fine when I got home too.

I am a UK beekeeper who has recently moved from London to windswept, wet Cornwall. I first started keeping bees in the Ealing Beekeepers Association’s local apiary in 2008, when I created this blog as a record for myself of my various beekeeping related disasters and - hopefully! - future successes.
View all posts by Emily Scott →
This entry was posted in Uncategorized and tagged bees on flowers. Bookmark the permalink.