It’s felt colder recently; the temperature is forecast to be around 7ºC/45°F with some wind and rain for the next few days. This is cold enough to get me shivering at the bus stop, but I know it’s nothing compared to the weeks of snow some of the US beekeepers I follow have been experiencing.

Winter is here, but spring is coming. The proof is at the Ealing apiary. Behold, snowdrops! 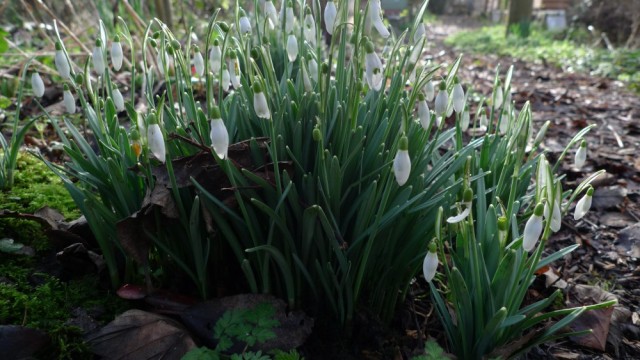 Snowdrops, with no snow dropping on them.

Gorgeous purple crocuses too, containing vivid orange pollen. So important for bumblebee queens. Little clumps of them are scattered around the apiary, so it is a challenge for clumsy footed beekeepers like me not to tread on them.

In his classic book ‘Guide to Bees and Honey’ (2010), Ted Hooper says that crocuses are “Very attractive to the bees. They provide nectar and good quality pollen in the early season, when this is so important to the colonies’ spring build up.”

I brought two presents with me to the apiary – cake for the humans and mealworms for the apiary robins. I like to hear their excited chirps.

In a strange act of co-ordination, both Clare and I had made banana cake. Mine was the first cake I’ve made with my new Bundt tin. A Nordic Bakery recipe, it contains all sorts of spices – cardamom pods, cloves, cinnamon, ginger – along with five mashed bananas. I was a bit unhappy with it as I left it too long in the oven, so it seemed quite dense. Clare’s was great though, a banana loaf with juicy raisins and chocolate chips.

“Is anyone here to do any beekeeping?” chuckled Andy. 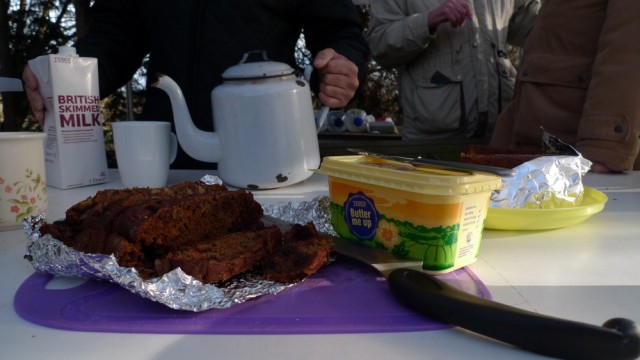 Well, Emma and I did heft our hives and check that their fondant hasn’t run out yet. The bees were wisely hiding inside, even though the sun was out. I was amazed when Clare told us that an escaped swarm from last year is still living in her neighbour’s tree – not in a cavity, but exposed to the elements. Combs are hanging from the tree and she can see a few bees still up there. Really hope they can make it through to summer!

John Chapple gave me a good tip. Some of the lectures from the UK National Honey Show 2013 were filmed and can be watched at honeyshow.co.uk/lectures.shtml. There are really high class speakers at the show, so I’m looking forward to watching these. They’re not just about honey but on all sorts of topics, including “Keeping Bees in Frozen North America“.

37 Responses to Crocuses and snowdrops