Notes from a talk by David Rudland, ‘Bringing bees from winter into spring’

On Wednesday evening I went to a London Beekeepers Association (LBKA) talk by David Rudland on the topic of ‘Bringing bees from winter into spring’.

His talk reminded me that you can never say “I know it all now” – researchers are constantly making new discoveries that have deeply practical relevance to the best way to look after our bees. This is a post about practical beekeeping – it may not make much sense to beginners and probably won’t be very interesting for non-beekeepers! You have been warned.

Winter management – jobs to do over the winter

“I like being controversial”, David said with a big grin on his face. He then proceeded to tell us why all sorts of things most UK beekeepers do over winter are unnecessary/a bad idea.

Lots of beekeepers avoid opening their hives during winter, for fear of chilling the bees and brood. David however recommends doing a quick two minute check in December and January (as long there’s not a blizzard or horizontal rain going on). The idea is to check for brood if you’re considering treating with oxalic acid and also make sure that the bees are near stores.

Seasons have changed quite dramatically over the last couple of decades; David now finds that the majority of his hives have brood all year round. Unfortunately oxalic acid, which is used by many UK beekeepers as a winter anti-varroa treatment, is only about 20% effective when there is brood in the hive, as the mites will all hop into the brood. David feels it’s only worth doing oxalic if there’s no brood in the hive, otherwise disturbing your bees isn’t worth it.

This relates to my post in December, ‘The great Facebook oxalic acid controversy‘. LBKA Committee member Mark Patterson was at the meeting and spoke up to say that when he checked his bees in early-mid December they were broodless, so he was able to go ahead and do the oxalic treatment. If there is brood when you check, destroying it and coming back a day or two later is an option. 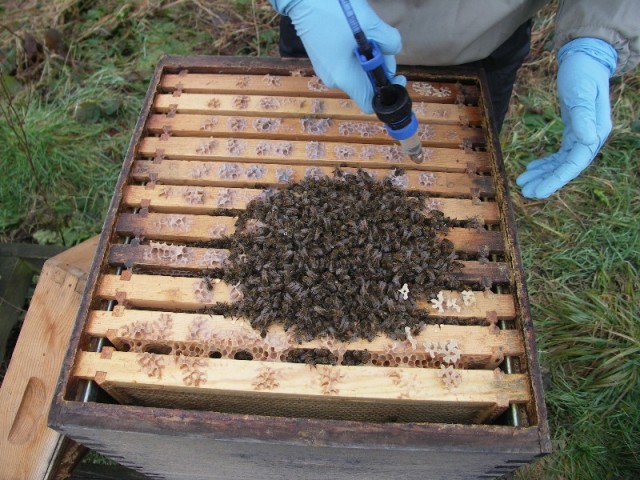 “How many of you heft your hives?” asked David. Many of us put our hands up, only to be told not to bother. David believes it is a meaningless exercise, as it tells you nothing about where the bees are in relation to their stores. What you want to know is, have the bees got access to food? If brood is present the bees will be extremely reluctant to leave it, even if honey stores are on the next frame. This can result in them starving to death. In this situation you could dangle rolls of fondant down between the frames (thanks Mark Patterson for this tip).

If you are in any doubt, feed! Once you start feeding candy (fondant) you have to keep feeding it because they’ll put their brood nest there.

Make sure your bees have water nearby. Water is very important for bees, even in winter, as they need it to be able to dilute their stores. David and Celia use upturned dustbin lids with stones in. Compost piles are also very good sources of moisture.

Build new frames but don’t install the wax foundation until needed. Bees don’t like building on old foundation. Warm up old foundation that’s got cold by leaving it in a warm room or, best of all, heating it gently with a hairdryer until you smell the oils. A hairdryer will warm all the way through the wax.

Spring management – jobs to do in the spring

April is a good time to change comb, as by then there are new young bees in the hive. The optimum age for bees to begin wax building is around 12 days old. If the shook-swarm or Bailey exchange is done too early on, the older bees which have lasted all winter will be forced to build wax. This is like asking a group of pensioners to build their own nursing home!

David and Celia find that getting the bees to draw out new comb helps maintain a good brood pattern when the queen begins laying in it. 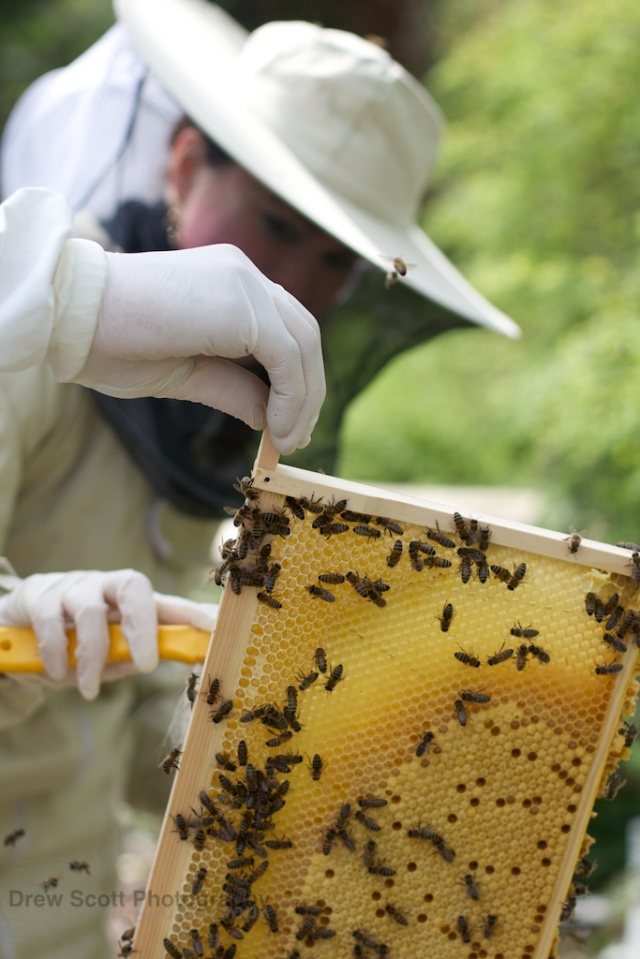 See FERA’s ‘Shook swarm’ fact sheet for step-by-step instructions on how to do a shook-swarm.

David’s favourite way to change comb is the shook-swarm method (shaking the bees onto new foundation, burning the old brood frames). Colonies need to have at least five frames of bees and a laying queen. The amount of brood doesn’t matter so much as the amount of adult bees. Don’t do this on colonies which are on less than five frames, as they will be too weak.

It should take an average sized colony about a week and a half to draw a new brood box’s worth of comb out in April. Always feed heavy 2:1 sugar to water ratio syrup after shook-swarming, even if a nectar flow is on. David finds the cost of wax and syrup are more than recovered through the subsequent strength of the colony.

Shook-swarming can be used as a great anti-varroa technique. If you take two combs of open (uncapped) brood when shook-swarming and place them in the middle of the new brood box, all the mites feeding on the adult bees will jump into the larvae to reproduce. Once the larvae has been capped, you then remove these frames before the bees and varroa hatch twelve days later! If you forget to do this in time, congratulations you’ve just bred varroa.

Someone asked if doing the shook-swarm puts colonies backwards, but David finds the contrary – the sense of urgency to replace the comb really makes the bees go for it. He knows a commercial beekeeper who shook-swarms all his bees in May – it improves his honey production as the workers then don’t have to worry about feeding brood.

The shook-swarm can also work well as a quick technique to unite two colonies. Pick one queen and shake the two colonies in together. Spray a little sugar water over to distract them from fighting and they should be fine.

See FERA’s ‘Replacing comb’ fact sheet for step-by-step instructions on how to do a Bailey comb change.

David’s method of Bailey comb change uses multiple dummy boards on both side of the brood boxes to create a ‘chimney’ effect. The bees in the bottom brood box warm up the bees above, making it easier for them to draw new comb. Once mature brood is present in the new comb, move the queen up into the top box and put a queen excluder between the two boxes.

The Bailey change is gentle, not too drastic and preserves brood. This makes it more suitable for small colonies. If a small colony has nosema, the Bailey change will not destroy all the spores but will get the colony in a better shape to cope with the nosema. However, any pathogens on the old comb are transferred up to the new comb as the bees move about and the varroa are also preserved because the brood is left to hatch.

In both methods, ultimately the comb is discarded but the wooden frames can be reused. David and Celia use a team of 34 geese to eat up the wax from the sides of old frames – apparently they love it. They’re then boiled in washing soda (the frames, not the geese).

Does the queen have space to lay?

Don’t let your brood nests become clogged with stores. If there are no empty brood cells free, the queen won’t have space to lay. If you have any drawn out comb you could put this in and remove a couple of frames of stores.

“Anyone tried MAQs yet?” asked David. Mark P had bought some but not used it yet; no-one else had tried it.

Apparently people have reported mixed results with MAQs. The biggest issue is often loss of brood, because the formic acid will permeate through the brood cell cappings. Yes it kills varroa in the brood, but it kills brood too! In that way it’s like doing a shook-swarm. It has some advantages over Apiguard as it can be used safely whilst the bees are storing honey. It will eat any metal work inside the hive and even kill grass in front of the hive!

You can find David and Celia’s website at www.eastsurreybees.co.uk. What do you think of his methods, would you consider using any of them? 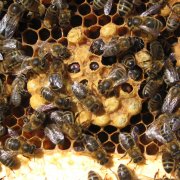 I am a UK beekeeper who has recently moved from London to windswept, wet Cornwall. I first started keeping bees in the Ealing Beekeepers Association’s local apiary in 2008, when I created this blog as a record for myself of my various beekeeping related disasters and - hopefully! - future successes.
View all posts by Emily Scott →
This entry was posted in Colony management, Disease prevention and tagged bees in winter, practical beekeeping tips, shook-swarm, varroa. Bookmark the permalink.

11 Responses to Notes from a talk by David Rudland, ‘Bringing bees from winter into spring’