There was a lot going on at the apiary on Saturday. Naive people might think that on a bank holiday Easter weekend the apiary would be quiet. Not so when there is tea to be drunk, hot cross buns to be eaten and even some beekeeping to do! 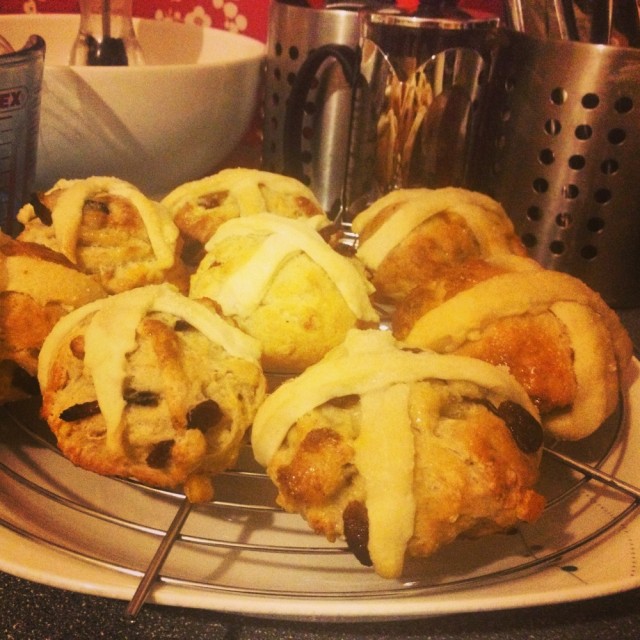 These were my first ever attempt at hot cross buns. They looked fine but the texture was more like that of a weapon than a squishy doughy bun.

I left the buns on the table and watched Jonesie inspect his hive. Here’s a chunk of drone comb he sliced off to check for varroa. He’ll put it in his freezer and then break it open to look for mites once it’s frozen. There’s something very appealing about the chunkiness of drone comb, the regular golden bumps. The workers were reluctant to leave it. 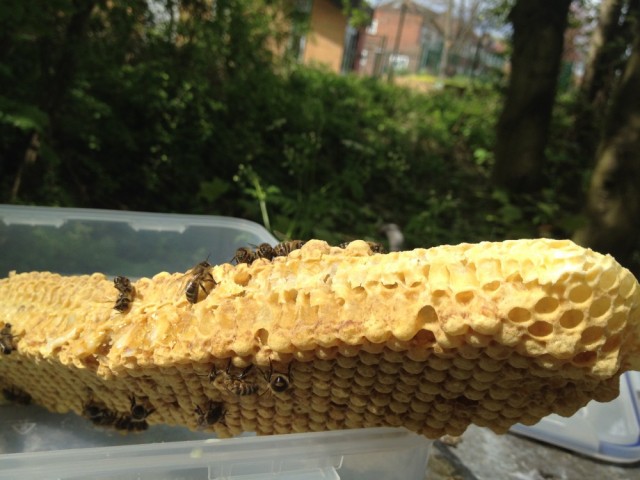 In the foreground below is a strange little bee Jonesie found in his hive. She was a honeybee, but so bedraggled and black that it was hard to recognise her as one. Her sisters seemed to be trying to clean her up – could she have fallen in some kind of oily substance? Poor wee thing.

EDIT: Thanks to commenters westernwilson and thomas73640, who have identified the black bee as probably suffering from chronic bee paralysis virus (CBPV). This is a virus associated with the varroa mite, which probably helps transfer it between bees. It is also associated with crowded hives, as close contact between overcrowded bees breaks hairs from the cuticle, allowing CBPV to spread from diseased bees to healthy bees via their exposed epidermal cytoplasm. 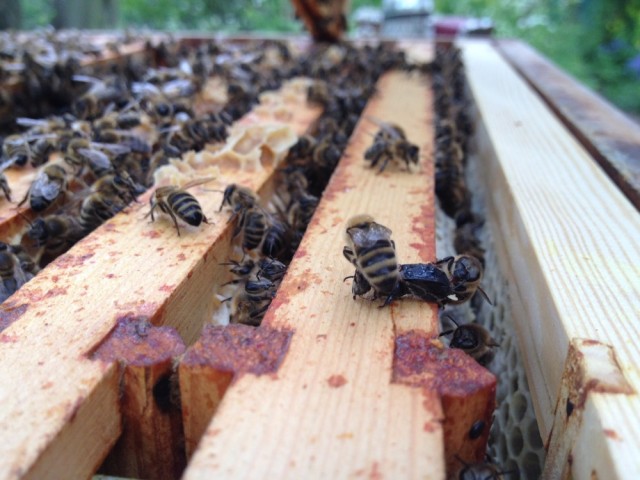 Below you can see a new hive that has landed in the apiary. It belongs to Brian, who has taken an old abandoned top-bar hive in the apiary and made it his own. I can’t wait to see what bees do with it. To the left is a bait hive he’s made, sitting on the top of the main hive. Here you can see Brian explaining the hive to Andy Pedley. Andy is always full of enthusiasm and told Brian that even if the hive is a complete disaster, at least it will be very entertaining and a great experiment. 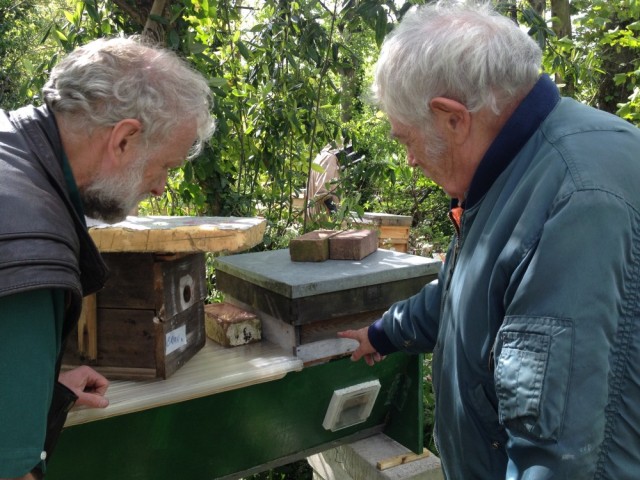 Tom inspected his hive, which last week he suspected was queen-less. He had put a frame of eggs and larvae from Jonesie’s hive in there last week to see if the bees made a replacement queen for themselves. There were no new queen cells made – but suddenly Tom said ‘There she is!’ and pointed at a little virgin queen walking around a frame. Mysteriously, there was no sign of any queen cell she might have emerged from – did the workers remove all evidence of it? 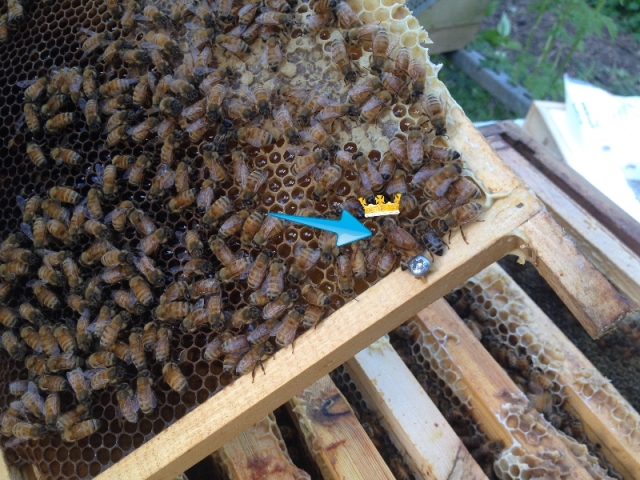 You need sharp eyes to spot a virgin. At the moment she’s about the same size as the workers, but her abdomen is more pointed at the end. Some sunshine is forecast at the end of next week, so hopefully she can get out and mate then. Most of the hives have begun to produce drones now.

“There’s always summat takes you by surprise with bees” Tom said. “I open them up expecting them to have made a queen cell and instead I find a virgin running around.” That’s the joy of bees!

As for our bees, Myrtle and Chilli are doing well, although Chilli’s workers have drawn out about three frames more than Myrtle’s. Myrtle is our favourite queen as she and her mother, grandma and great-grandma etc before her have produced the gentlest of bees. I hope her colony will be ok!

Chamomile’s colony was decidedly narky and kept going for me, which I’m not used to with our bees. It could have been the weather as it was chillier than I would have liked, so I gave up on any ideas of starting the Bailey comb change off this week. I noted more perforated cappings and exposed dead larvae in a small patch of brood.

Chamomile’s bees are on a double brood box and I’d really like to get them down onto a single to make them easier to inspect for queen cells etc. If Myrtle produces any queen cells I would feel tempted to replace Chamomile with a new princess from Myrtle. I dislike getting rid of queens, but I don’t like inspecting bees that try to sting me either.

When I got back from inspecting all the hot cross buns bar one had disappeared, so hopefully they weren’t as bad as I thought, although they did get called “hot rock buns”. Andy left me a comment on my Facebook page afterwards to say:

“They were delicious, thank you so much …. The beekeepers are just teasing … And it might be that they think by “challenging” you, you will bring more the next week. We might allow you a week or two off but bring double when you get back from honeymoon, because we will all be starving!”

Yep, I will be getting married on 10th May, so don’t expect many posts in May!

I am a UK beekeeper who has recently moved from London to windswept, wet Cornwall. I first started keeping bees in the Ealing Beekeepers Association’s local apiary in 2008, when I created this blog as a record for myself of my various beekeeping related disasters and - hopefully! - future successes.
View all posts by Emily Scott →
This entry was posted in Queens. Bookmark the permalink.