A tale of two queens

After a gloriously hot Friday, it was disappointing to be making my way to the apiary in rain on Saturday afternoon. Luckily the rain soon cleared and even turned to sunshine later, leaving Emma and I free to inspect our five hives.

A bee came to inspect our smoker, so Emma removed her before she got overheated. 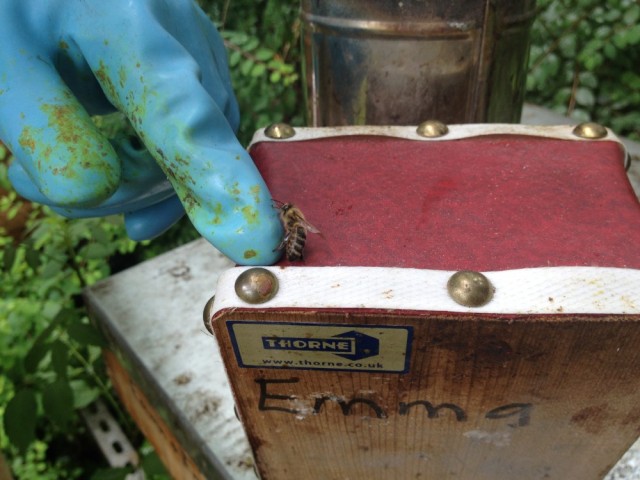 Emma rescues a bee from the smoker

Inside the hives all was well. The new queens have started laying in our two new unnamed colonies, formed from artificial swarms on Chilli and Chamomile’s hives on 10th May. This is good, but we still have a lot of decisions ahead as five hives are too much for us. We are likely to sell one or two later in the summer, or possibly combine colonies. After inspecting Myrtle’s hive too, and putting a super on top, we stopped for a tea break.

My cousin Joanna gave me some bucks fizz marmalade for our wedding, so I had brought along a marmalade cake to keep our energy levels up. It’s a bit nutty, a bit spicy and of course orangey. 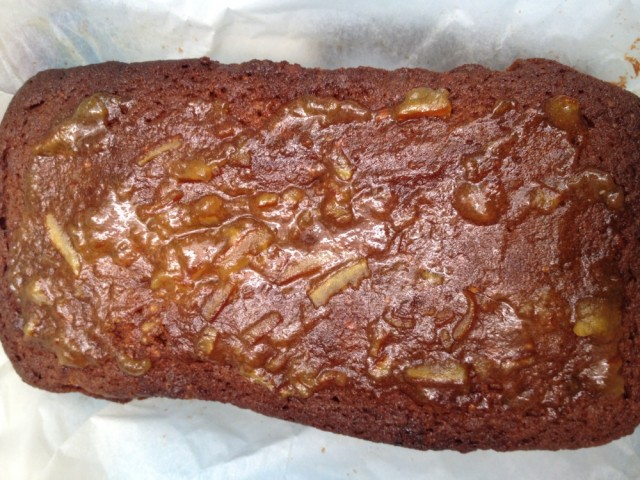 After tea and cake Freddie and Emma inspected Chilli and Chamomile’s colonies. I was distracted by Jonesie’s hive as he had discovered gazillions of queen cells in there, all containing a larvae and unsealed. As the cells were all unsealed we expected the colony had not swarmed yet and went through looking for the queen. Four times we went through checking every frame, the bottom of the box and super too, in case she was slimmed down for swarming and had got through the queen excluder.

Considering she was marked and had been seen a week ago with her mark on, we came to the conclusion that she wasn’t in the hive. Although it is unusual for a colony to swarm before queen cells are sealed, perhaps the spectacular weather on Friday encouraged them to get going. Jonesie decided to take most of the queen cells down and leave a couple, to reduce the likelihood of further cast swarms from the already depleted colony. 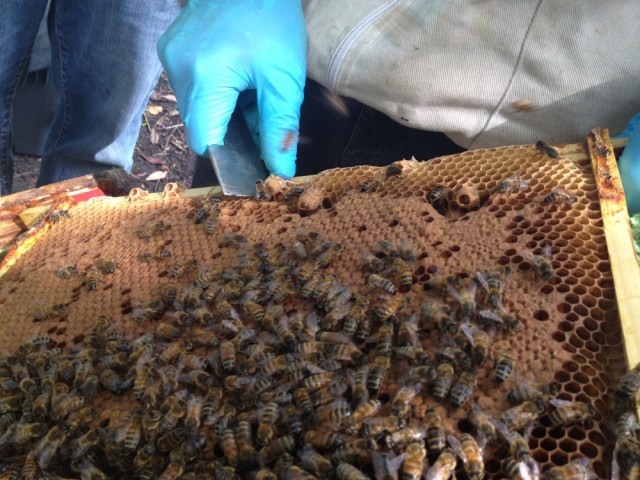 Tom found a queen cell in his hive too. He has been noticing a lot of queen cells at the top and middle of frames this year, instead of at the bottom as queen cells often are. Has anyone else been experiencing this? 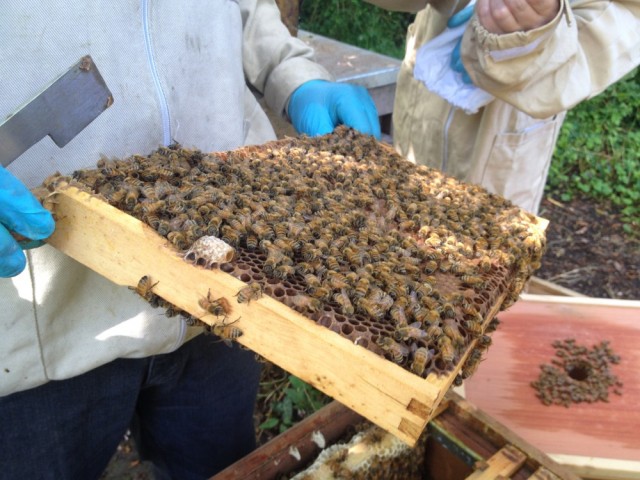 Here’s Jonesie holding up one of his foundationless frames. It’s interesting to see how the bees begin building. To produce wax, worker bees older than 10-12 days old eat nectar and hang in chains; this raises their body temperature and causes their eight wax glands on the underside of their abdomens to secrete tiny flakes of wax. They then chew the wax and manipulate it into the precise shapes of comb using their mandibles and forelegs. 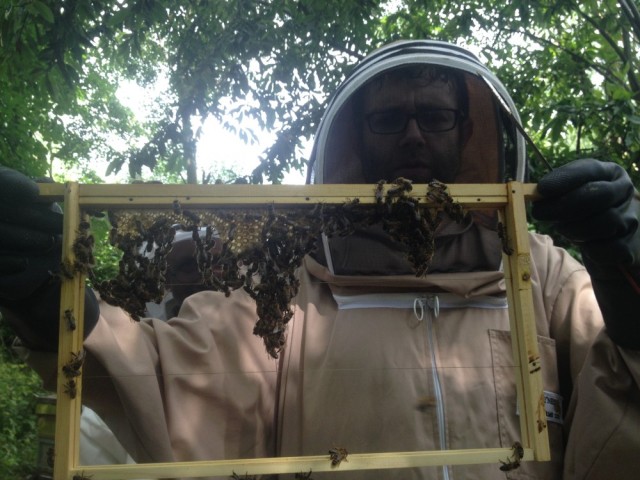 After all the inspecting was done Tom and I stopped by at his hive in Hanwell on the way home. There I was lucky enough to see the rare sight of two queens in one hive. 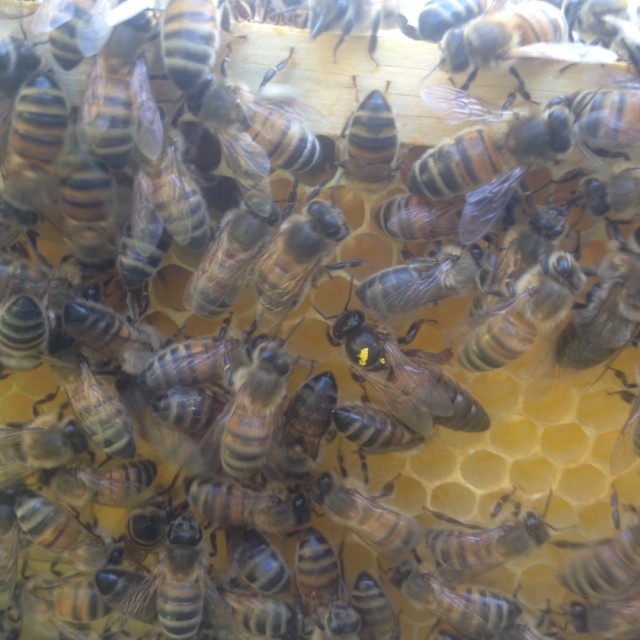 And here’s her new blonder daughter. I’ve added little crowns to help you spot them 🙂 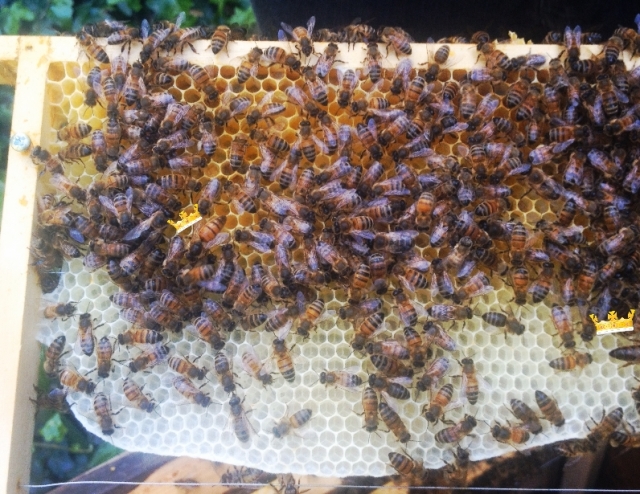 Now you have to find them on your own… 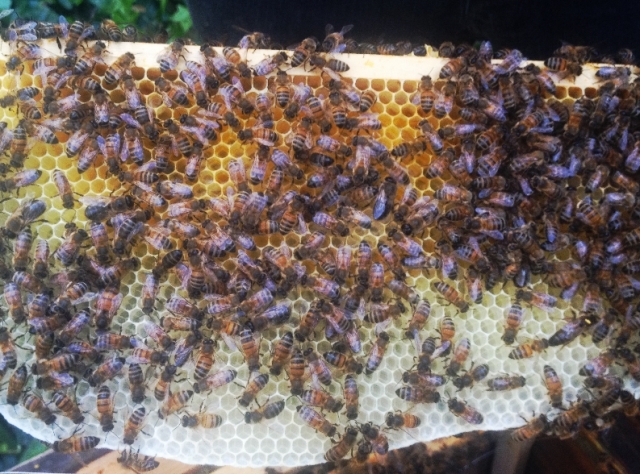 I’ve heard bee inspectors say two queens in a hive is commoner than most beekeepers think. Often beekeepers will be looking for one queen and stop looking for others once they see her. When superseding the old queen it makes sense for the colony to keep her around until her new daughter queen has got into the swing of laying.

A lovely end to a day of inspecting!

I am a UK beekeeper who has recently moved from London to windswept, wet Cornwall. I first started keeping bees in the Ealing Beekeepers Association’s local apiary in 2008, when I created this blog as a record for myself of my various beekeeping related disasters and - hopefully! - future successes.
View all posts by Emily Scott →
This entry was posted in Queens and tagged queen cells. Bookmark the permalink.

25 Responses to A tale of two queens