All about the hunny

Long-time readers may remember my post back in 2011, ‘Bringing home the hunny‘. This was the last time we had a significant honey harvest. Back then we found our honey wouldn’t spin out in Emma’s fancy electric centrifugal extractor. By this summer the memory of that had faded, so as we prepared to extract the honey in Emma’s dad’s kitchen we were optimistic that this year would be easier.

First, we decapped the honey with a decapping fork. Once the wax cappings are removed the honey can be spun out in the extractor. Steven Benbow has a nice description of an extractor as “a sort of giant salad spinner for honeycombs” in his book The Urban Beekeeper. Those white buckets we’re using belong to Emma’s dad, who is a butcher and runs his own wholesale company (now semi-retired and only working six days a week).

The darker honey in the foreground comes from my allotment hive in Northfields, west Ealing. The lighter honey on the right comes from Myrtle’s hive a few miles away in Perivale. Emma preferred Myrtle’s honey as she found it more delicate and floral, while I preferred the darker allotment honey as I felt it had more oomph to it.

So we put the first three decapped frames in the electric extractor, and left it to spin – and spin, and spin. Every few minutes we checked hopefully to see how much was coming out. But only a trickle gathered at the bottom. Eventually, after about twenty minutes of churning, smoke began coming from the engine. At that point we admitted defeat. Our bees have decided that if we’re going to take their honey, we’re going to have to work for it!

Time for Plan B(ee). We cut the honey away from the foundation and mashed it through colanders. This removed most of the wax, but it will need to be more finely filtered using muslin. 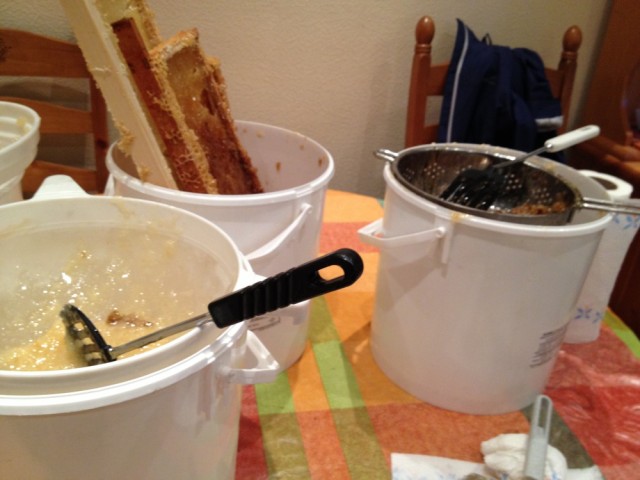 It’s a slow, time-consuming process. Emma is completing it at her flat – thanks Emma!

Sadly, it means we have lost the valuable wax honeycomb cells the bees worked hard to produce. If we could have extracted the honey by spinning it out in the extractor, the comb would have remained intact and would have given our bees a head start next year.

So why is our honey so thick and awkward?

Well, what is honey? Most of us know it’s concentrated nectar, reduced in water content by the bees to around 18% water, at which point they cap the honey cells with wax and it’s ready to be extracted. Once nectar has been evaporated down to 18% water, what’s left is mainly sugar in the form of fructose and glucose. But the proportions of sugar types can vary enormously, so that some honeys will contain more fructose than glucose and vice-versa. On average honey will contain 38-40% fructose, 31-35% glucose, 1-3% sucrose and 17-19% water, along with about 2% minerals, pollen, protein and amino acids (The Honey Bee Around & About by Celia F Davis, Bee Craft Ltd 2009).

The type of sugars contained in honey are one of the factors affecting its viscosity – its thickness. Ted Hooper in his classic Guide to Bees and Honey (2010) explains the varying viscosity of honey:

“Viscosity is the name given to the property of a fluid which causes it to flow slowly, or which resists an object falling through it. … The viscosity of honey is mainly controlled by its gravity, and the lower the water content… the greater will be the viscosity.”

He goes on to say:

“Viscosity is also increased by the amount of colloid material in the honey. The colloids, which are probably small pieces of solid substances and large molecules and include proteins [pollen?], have a similar electric charge and so repel each other. This repulsion again offers a resistance to movement and increases the viscosity, higher in dark than light honey. The extreme example of this is heather honey which has moved beyond a viscous fluid to become a gel.”

He also mentions that honeys with a greater than average proportion of glucose to fructose will granulate more quickly, as glucose is less soluble in water than fructose and crystallises more quickly – oilseed rape honey is an example of this. High viscosity honey also slows down the rate of crystallisation, as molecules of sugar migrate through the honey more slowly. I would say our honey has a high fructose to glucose ratio, as it shows no signs of granulating yet. The 2011 honey we got never did crystallise.

About heather honey, Ted says “Extracting is a problem because the honey is a jelly and will not spin out of combs in the normal way. The jelly is thixotropic, and thus if it is stirred it becomes a fluid and can be extract normally. A form of stirring can be done in the comb using an implement which looks like a scrubbing brush set with fine steel needles for bristles.”

If we had such an implement, perhaps that would have helped – but it sounds very messy! We would love to get our honey tested to find out where the bees have been. Although it’s thick like heather honey, it seems unlikely that the bees have found large quantities of heather in west London. Elder (and younger!) beekeepers, have you ever had such problems extracting?

EDIT: Emma has now written a post on how she’s been getting our stubborn honey out. She’s been hard at work stirring each cell individually with a key… How to extract honey too thick to spin out of a perfectly good extractor.

I am a UK beekeeper who has recently moved from London to windswept, wet Cornwall. I first started keeping bees in the Ealing Beekeepers Association’s local apiary in 2008, when I created this blog as a record for myself of my various beekeeping related disasters and - hopefully! - future successes.
View all posts by Emily Scott →
This entry was posted in Honey, Uncategorized. Bookmark the permalink.

42 Responses to All about the hunny