On Monday 6th October I went to the fourth annual London Honey Show, an event celebrating London’s honey and bees in general. As well as a honey tasting competition, there are stalls selling food, beekeeping books and beauty products, plus expert speakers doing short talks. This year’s show was a lot of fun, especially as I knew several people there and warming honey cocktails & mead samples were on offer.

Here are some notes from the talk by Dave Goulson, the second speaker. Dave is well known as a Biology Professor at the University of Sussex, writer of books A Sting in the Tale and A Buzz in the Meadow and founder of the Bumblebee Conservation Trust in 2006, a charity which now has 8,000 members. 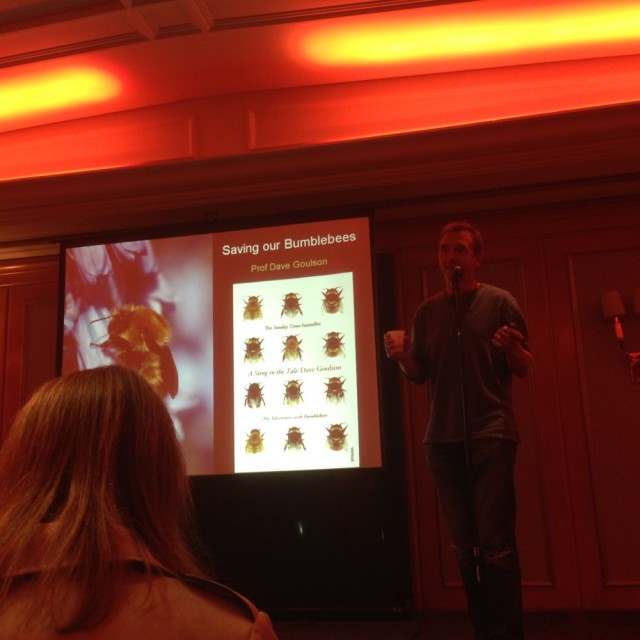 Speaking to a room of honey fans, Dave wanted to remind us that honeybees are not the only bees! There are an incredible 22,000 known species of bees worldwide, including around 250 species of bumblebee.

He gave a quick explanation of the life cycle of bumblebees to us. Emerging from their winter hibernations, bumblebee queens visit pussywillow and lumpwort flowers in early spring. They look for ex-mouse or vole cavities, preferably with some soft bedding material already inside. After laying their precious first eggs, they sit over them like birds on their nests, shivering their muscles to keep the eggs warm. So cute!

We think bumbles first originated east of the Himalayas about 30 million years ago. They have adapted to live in cold weather and tend to be scarce in warm areas like the Mediterranean. Bumbles can keep their body temperature an incredible 30ºC higher than the surrounding air temperature, allowing them to fly in the Arctic in temperatures below freezing. Dave showed us a photo he took of a buff-tailed bumblebee flying in January, feeding on Mahonia amongst the snow.

The downside to this ability to stay warm is that it takes them huge amounts of energy to stay in the air. Bumblebees need LOTS of flowers. This appetite and their ability to do buzz pollination makes them major pollinators of crops like oilseed rape, field beans, tomatoes, peppers, raspberries and strawberries. I took the photo of the bumblebee below on chinese anemone and seem to remember she was doing some buzz pollination, intensely vibrating her muscles to shake the flower and release extra pollen from its anthers. 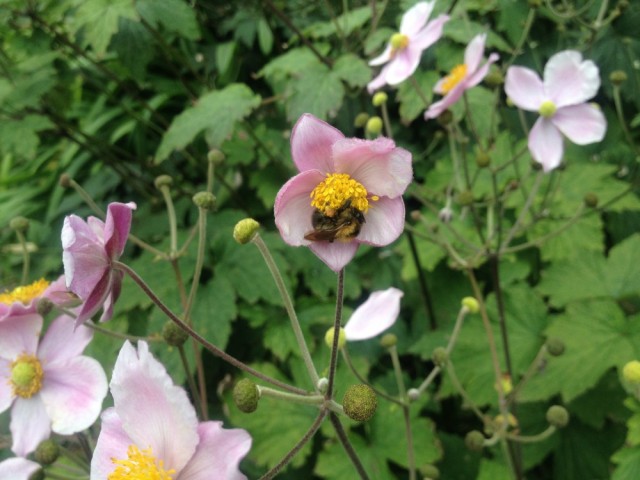 Unfortunately bumblebees are not doing as well as they used to be. For instance, as recently as the 1950s the great yellow bumblebee used to be found in many different sites in England, Wales and Scotland, from Scotland’s Orkney Islands to England’s most southerly county, Cornwall. It is now confined to Orkney, the Hebrides and the northerly coast of Scotland. Why?

Dave gave us his opinions on the reasons some British bumblebees, such as the great yellow bumblebee and the short-haired bumblebee, have declined in their range:

1. Changes to farming
England lost 98% of its hay meadows and chalk downland during the 20th century. Like the great yellow bumblebee, Corncrakes, birds which used to nest in hay meadows all over the UK, now live only in remote corners of Scotland where farming has changed relatively little.

Dave begged us not to buy bumblebee colonies from garden centres. They are supplied from factory reared colonies from Europe used for tomato pollination, and are often full of parasites and diseases. Read more about this issue at Buzzaboutbees.net’s Bumblebees for sale? page.

3. Neonicotionoids (Neonics)
For this part I’ve added to my notes using the chapter ‘The Disappearing Bees’ in Dave’s recent book A Buzz in the Meadow. Introduced to the world in the mid-1990s, this type of insecticide works by attacking the nervous system and brain of insects. Their advantage is meant to be that they can be applied as a seed dressing before the crop is sown, which the growing seedling then absorbs, spreading the chemical throughout the plant. This prevents the farmer having to spray insecticides several times as plants develop.

The trouble with a insecticide present in all parts of the plant is that nectar and pollen produced by the plant contains the insecticide too. Each time a pollinator visits the plant, they consume a small amount of the neonic. This stuff is highly toxic – just 1 teaspoon of neonicintinoids is enough to kill over a billion bumbles.

Disturbingly, most of the neonic seed chemical coatings, between 80-98%, end up not in the plants themselves but in the soil. Once in the soil, most published estimates of the half-life of neonics are anywhere between 200 to 6,000 days, depending on soil type and conditions. They are also water soluble. So these chemicals are everywhere in our soil and waterways, having who knows what effect on the insects within them. Please, please don’t add to the chemicals in our world by treating your lawns and garden plants with insecticides.

4. Gardening
Don’t buy “hideous annual bedding plants – an absolute travesty”. They often have no scent, no nectar and some no pollen. Instead, grow perennial cottage garden type flowers. Dave’s favourite is viper’s bugloss.

If you have no garden, badger your local council to stop wasting your money on mowing verges and removing habitat for bees.

I’ve done some other posts on books/talks by Dave:

And Emma’s done a very entertaining post on the London Honey Show with lots of photos:

Below is Dave speaking in front of a photo of Toby, a army-trained sniffer dog who helped one of Dave’s Phd students hunt for bumblebee nests. You can read about him in Dave’s book A Sting in the Tale. 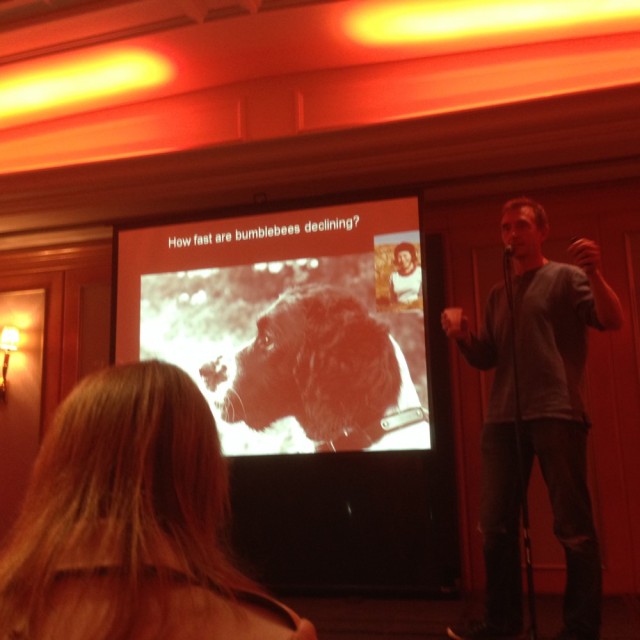 I am a UK beekeeper who has recently moved from London to windswept, wet Cornwall. I first started keeping bees in the Ealing Beekeepers Association’s local apiary in 2008, when I created this blog as a record for myself of my various beekeeping related disasters and - hopefully! - future successes.
View all posts by Emily Scott →
This entry was posted in Events, Urban beekeeping and tagged bumblebees. Bookmark the permalink.