On the cusp of the solstice

Tomorrow – the 21st December – is a special day for me. It comes every year and always promises a new start, a return to life. It’s the winter solstice, the shortest day of the year. A longer day must follow the shorter day, bringing with it the promise of spring.

Beekeeping keeps you in touch with the seasons. Today was a bright crisp day as Emma and I, with the help of two beginners, opened up the hives to apply oxalic acid. The bees are alive in all four hives and look fine, with the clusters on average covering about four to five frames. Mostly the bees seemed to be near the top of the hives, feeding on the fondant.

Above you can see us warming the oxalic acid over the teapot, an idea Elsa had. It’s nicer for the bees if the acid isn’t dead cold. 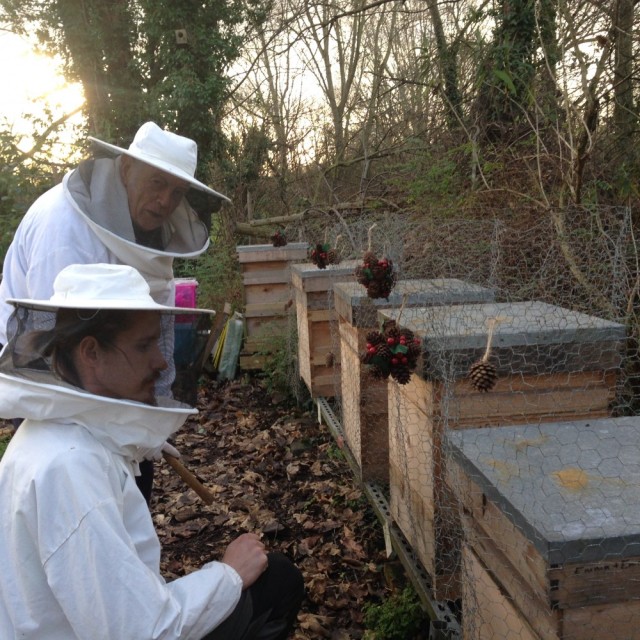 And here is Brian talking to a young man who was visiting the apiary for the first time (I’m sorry, I have a terrible memory and can’t remember his name – perhaps Stefan?). Emma has beautifully decorated the hives with garlands of cones and berries. I think we can safely claim to have the best hives in the apiary, along with the best bees (deliberately provocative statement in case any Ealing beekeepers are reading this).

John Chapple gave us some useful advice on putting on additional fondant. No need to wait until the bees have finished their fondant block. Instead, cut a hole in the middle of the old block’s plastic wrapping top. Cut a corresponding hole in the middle of the new block. Put the new block on top of the old fondant block so that the two holes meet and the bees can climb up into the new block once they’ve finished eating the old fondant.

By the way, John will be on TV on Christmas Day –

The Queen’s Garden
Thursday 25th December at 3:10pm on ITV

Queen’s Garden, Episode 1: The first of two programmes in which Alan Titchmarsh gets exclusive access to the royal gardens at Buckingham Palace for a whole year. He watches the garden change over the four seasons and reveals its hidden treasures that have evolved over five centuries. In the first part, he arrives along with 8,000 others to attend the Queen’s summer garden party, but unlike the other guests, he has a different itinerary. He begins by venturing into the garden’s wilder spaces where nature has been left to rule. He meets the Queen’s bee keeper John Chapple, delves into the history of the garden and finds its oldest tree. Late summer is the ideal time to visit the rose garden with its 18th century summer house. Later, as Christmas arrives, Alan helps royal florist Sharon Gaddes-Croasdale bring in plants to decorate the palace.

Pretty impressive – but I shouldn’t be surprised as John is true beekeeping royalty. 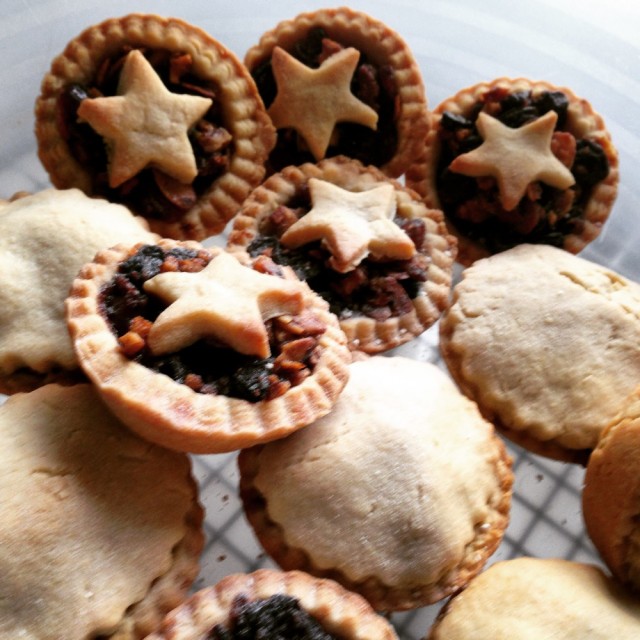 Here’s some mince pies I made. I did two lots this week, one with a plain shortcrust pastry and this batch with ground almonds and icing sugar added, which makes for a rich, crisp pastry. Not sure which I prefer – more experimentation and eating needed!

The days enlarge ever so gradually. But out in the apiary we saw green shoots – probably snowdrops – at least a couple of weeks earlier than usual. Anyone else seen signs of spring already?

I am a UK beekeeper who has recently moved from London to windswept, wet Cornwall. I first started keeping bees in the Ealing Beekeepers Association’s local apiary in 2008, when I created this blog as a record for myself of my various beekeeping related disasters and - hopefully! - future successes.
View all posts by Emily Scott →
This entry was posted in Uncategorized and tagged bees in winter, John Chapple. Bookmark the permalink.

22 Responses to On the cusp of the solstice