The beauty of bees

This weekend I have been thinking about how lucky I am to have access to the inner world of honey bees. I must have seen inside hundreds of different hives by now, but I never get bored of watching the bees. There is always some small detail that fascinates me, like one worker sticking out her proboscis to feed another, or a bee with glowing red propolis beads clinging to her legs, or a multi-coloured frame of pollen hexagons that reminds me of a stained glass window. 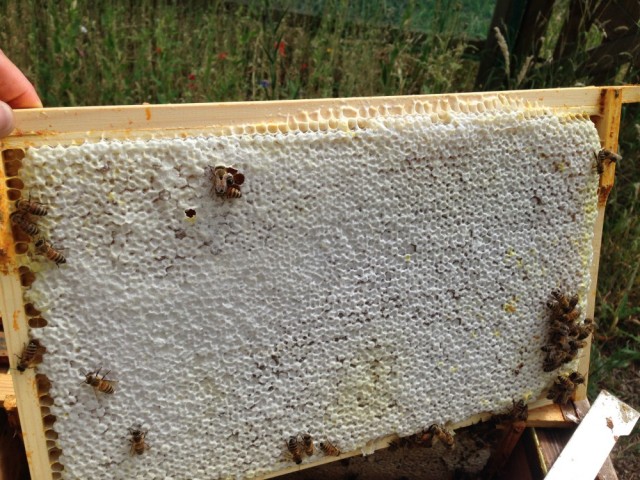 At this time of year the honey vaults are particularly impressive. Lacking a queen in their brood box for a month has led to Andromeda’s ladies packing the brood frames with wall-to-wall honey. See how perfectly smooth and white the wax cappings are! And now imagine how impossibly heavy I find their brood box to lift. A frame like this weighs something like 5 pounds (2.2kg) and there are eleven frames in the brood box. They won’t all be that packed with honey but still I can imagine the brood box could easily weigh about 40 pounds (18kg) upwards now.

With some complicated juggling around of frames and spare boxes I did manage to inspect both Andromeda’s brood boxes and came to the depressing conclusion that either they’ve killed her or she’s just not laying. After finding her in the super and then moving her down into the brood box last weekend I had such high hopes of coming along yesterday and finding some lovely new frames of eggs and larvae. Instead there are three new supersedure cells. I have left them to it, I doubt they have plans to swarm this late in the season. Just hope they can produce a mated queen from one as some colonies are already beginning to kick their drones out. 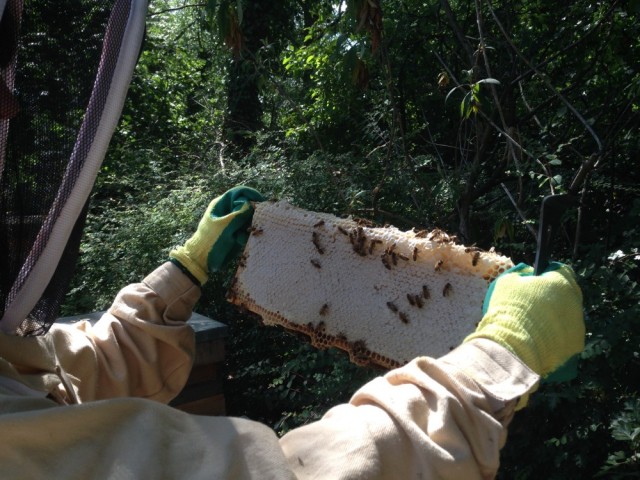 Above is Emma inspecting a similarly delightful but smaller frame of honey in Melissa’s super. 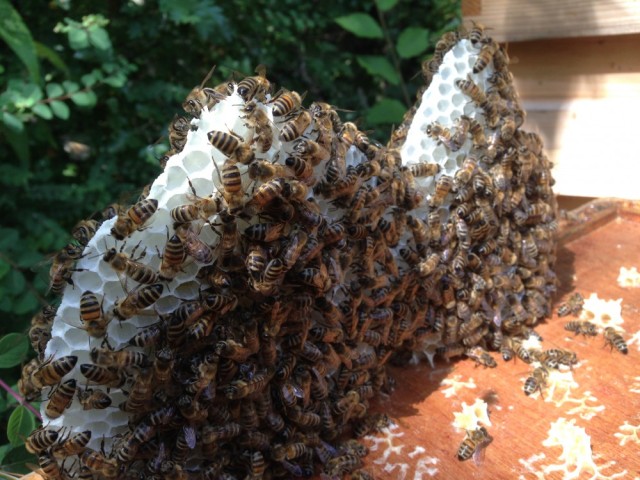 Due to the various distractions of life and general absent mindedness, we had accidentally left a space in Melissa’s super as well as Pepper’s. In this case they built perfectly white undulating mounds down from the crown-board, so I was able to lift this beautiful comb out and insert a frame in the space. Bees are often incredibly reluctant to leave natural comb they’re working on, so it took a lot of smoking to persuade them to move away so I could ease the comb off. It was very flexible and soft from the heat of the hive.

Above you can see the bees busy on the tops of the super frames. At this time of year inspecting is a difficult business as there are just so many damn bees. Around 50-60,000 of them. Everywhere you try to put your hands on a frame, a bee pops up. I have been finding that inspecting without gloves amongst this mass of bees concentrates the mind wonderfully. I am actually getting stung less – because I move my fingers very slowly and carefully to secure a hold amongst the bees. Before I would get stung by accidentally squashing them, but this hasn’t happened now for weeks. The catch is very sticky, mucky hands which are harder to eat cake with afterwards! 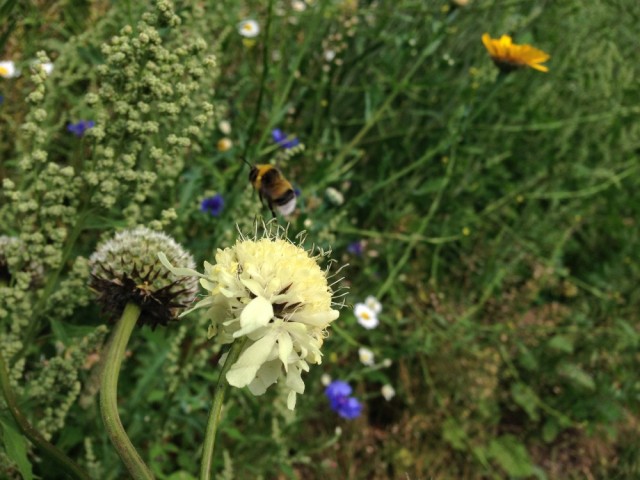 The main summer nectar flow is probably over now that blackberry is finishing flowering, but we will still have a little from ragwort, rosebay willow herb, himalayan balsam and then ivy will be the last main nectar crop in autumn. Our focus will now turn to harvesting the honey and luckily Emma has a lovely new extractor to help with that. She has already begun spinning some of the honey out, as you can read in her post Summer surprise. The beekeeping adventures continue! 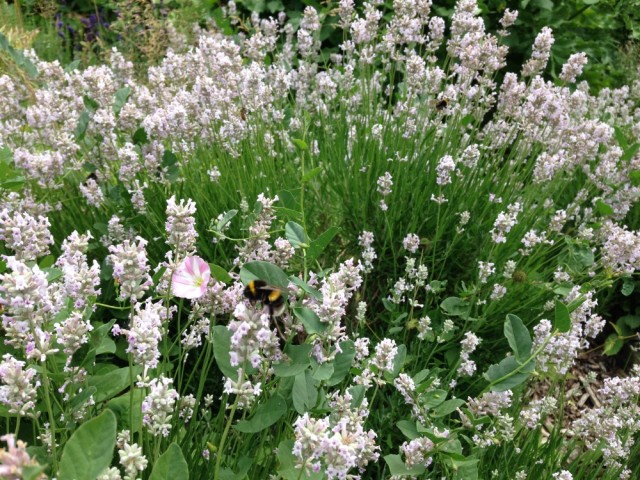 26 Responses to The beauty of bees