Writing is difficult at the moment. It’s rare that I get the chance to sit down and type without Tommy’s eyes popping open and requiring attention. But here are a few photos from my walks round the local parks and Kew Gardens.

An important plant for bees, particularly bumblebees. Clover florets (florets are the individual flowers that make up the flower head) drop once pollinated so that bees know not to bother visiting them. When red clover first flowers it has too deep a flower for a honey bee to reach the nectar, but if the clover is cut and then grows back, the flowers are shorter and can be accessed by honey bees.

The legume family, including clovers, vetches and trefoils, have special bacteria in their root nodules. These bacteria are able to turn nitrogen from the air into nitrates that enable the plants to manufacture protein for growth – in other words, they make their own fertilizer. This means they can afford to put more protein into their pollen, making it especially nutritious to bees.

White clover nectar is also very important for bees. According to an information board I saw recently at Kew Gardens, white clover contributes more nectar than any other plant species in the UK. Elizabeth Gowing describes clover honey in her ‘Little Book of Honey‘ as “sweet and light, with a citrus tang which changes to a sourish aftertaste that stops it being sickly to eat”.

When I think of July flowers, I think of yellows and purples. Bright yellow ragwort flowers grow alongside members of the thistle family in all the wilder parts of my local park. They’re tough and can grow on waste land, road sides, rough grassy areas etc. The plants are an important food source for orange & black striped Cinnabar moth caterpillars. Ragwort contains toxic alkaloid substances, which the caterpillars cleverly absorb and assimilate, to become unpalatable to predators.

Celia Davis in The Honey Bee Around & About (2007) describes ragwort as being “very attractive to bees… likely to produce quantities of extractable honey which smells horrible when it is fresh. If it is allowed to stand and granulate, the flavour improves and some beekeepers use it to blend with other, less flavoursome honeys.”

Clive de Bruyn is also positive about ragwort honey, commenting in his classic book Practical beekeeping (1997) “The honey is a deep yellow with a strong flavour thought by some to be obnoxious. I personally find that it adds a bit of interest.” Has anyone reading tried it?

Some more yellow flowers below – a sunflower, the one with pink petals I think is a species of echinacea and I’m not sure what the flower with a bumble bee in the middle is called – any ideas?

Presumably it is the sunflower nectar the bees are after, as a number of experts I’ve heard speak have said that sunflower pollen contains a particularly poor percentage of crude protein – only around 13% compared to 22-24% for an average pollen.

A honey bee forager – had she watched a dance first?

I find the different members of the thistle and teasel family hard to tell apart. They come in various shades of purple and levels of prickliness! Below are photos of a bumblebee on what I think is common teasel and a honey bee on what I think is a species of thistle. Teasel seeds are an important winter food for some birds, such as goldfinches. Interestingly there is some evidence that teasels may be partially carnivorous and able to absorb nutrients from dead insects in rainwater which gathers in a cup-like receptacle formed by leaves on their stem – see ‘Carnivory in the Teasel Dipsacus fullonum — The Effect of Experimental Feeding on Growth and Seed Set‘.

The pics below were taken by Drew on a better quality camera, as you can tell. I’m not quite sure what purple flowers these are, so if you do know please leave a comment! 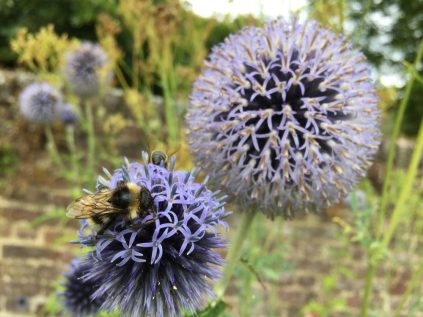 Recognise this? It grows in watery areas, so you can see it along the edge of canals and rivers. An invasive weed, but useful for beekeepers. It leaves a light grey pollen stripe on the middle of a honey bee’s back, the part she can’t quite reach to clean.

Over now in London, but the flowers continued during early July. We have blackberries available to pick already. It grows everywhere of course so is very useful for our bees. Did you know that there is a special word for the scientific study of brambles – batology? 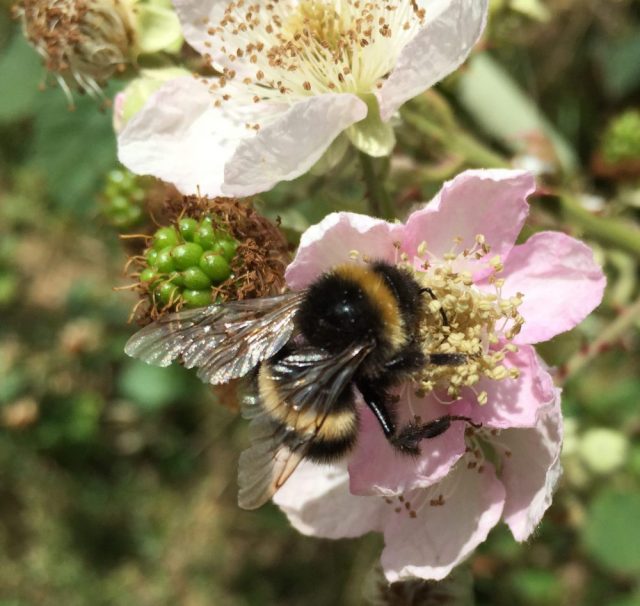 A young and sprightly example of the human genus. Not known to attract bees. Does gain attention from elderly ladies on the bus.

22 Responses to What’s been flowering: July