On the Saturday before Easter a small but enthusiastic group of us gathered under the shade of the apiary’s trees to watch John Chapple carry out a shook-swarm demo on one of the hives.

Unusually for John, he was actually wearing a veil. This was testimony to the reputation of the chosen bees as particularly curmudgeonly – “bad but prolific” was how John described them. In the end the bees were remarkably patient with us and I believe no-one got stung. Below are some photos showing John going about the process of shaking the bees off their old frames and into a fresh new hive of foundation. 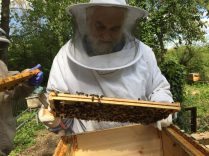 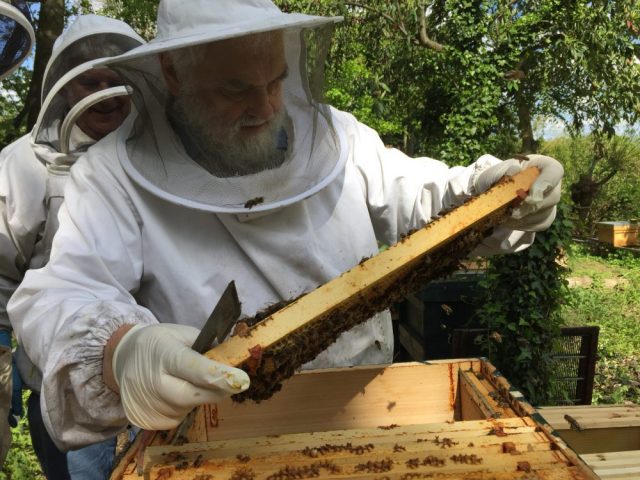 A queen excluder is placed under the brood nest (but above the entrance) to stop the queen absconding. The colony is fed plenty of syrup to help them draw out the foundation and build fresh new comb. The old brood combs are burned, along with any varroa lurking inside the brood. Replacing old combs also helps reduce the chances of the bees getting nasty diseases like AFB and EFB. One of the requirements of keeping bees at the Ealing apiary is to do an annual comb change.

It’s best to find the queen during a shook-swarm so that you can be sure she’s been safely put in the new hive. John had just taken one frame out when Tom’s sharp eyes spotted a magnificent dark queen running up the surface of the next comb. Although she had been marked last summer, she was now unmarked. Either her mark had worn off or the bees had replaced the original queen.

Pat commented that at the Middlesex conference in February one of the speakers suggested that the best way to find the queen is to take out a frame of brood and then immediately look at the surface of the next frame along. This queen had proved that!

Above is a photo of her being captured in a cage before John marked her with a nice pink pen.

I got a few short videos of the shook-swarming process, here’s some links to them:

Someone on Twitter commented about the last video that: “he is shaking an empty frame of foundation with few bees on….pointless showing a shook procedure with no bees on frame. Waste of a video clip” .  I thought I’d share that here as fair warning before anyone wastes four seconds of their lives watching it! Good to know my videos have fans.

Official guidance on how to carry out a shook-swarm can be found on the Beebase advisory leaflets page.

I am a UK beekeeper who has recently moved from London to windswept, wet Cornwall. I first started keeping bees in the Ealing Beekeepers Association’s local apiary in 2008, when I created this blog as a record for myself of my various beekeeping related disasters and - hopefully! - future successes.
View all posts by Emily Scott →
This entry was posted in Uncategorized and tagged John Chapple, shook-swarm. Bookmark the permalink.

11 Responses to A shook-swarm demo