Black bees on Countryfile – or are they?

I watched the Rame Peninsula Countryfile programme featuring British ‘black bees’ yesterday. It’s available to watch for five more days (only if you are in the UK though).

The show was keen to play up the romantic side of the Peninsula as Cornwall’s ‘forgotten corner’, a “well-kept secret best reached by boat”. They told us more than once that Mount Edgcumbe, a countryside estate in the Peninsula, was the location of Britain’s first ever reserve for the black honey bee (ahem that honour actually goes to Colonsay and Oransay – but never let a fact get in the way of a claim on TV). Mount Edgcumbe is however England’s first native honey bee reserve. 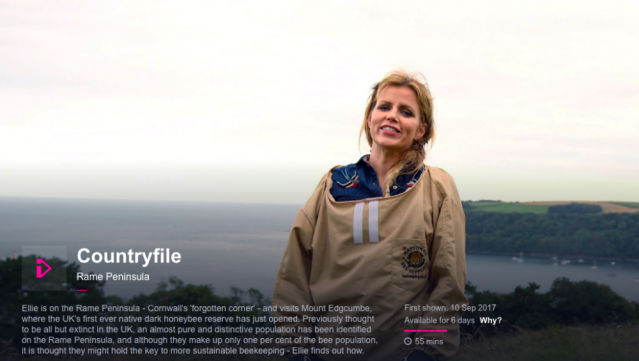 Black bees in Cornwall
The section on the black honey bees was presented by Ellie Harrison, who explained that a tiny population of these native thoroughbreds had survived in Cornwall since the ice age. Thought to be extinct in the UK by some until recently, it has been shown genetically that they still exist as a distinct sub-species of Apis mellifera, the European honey bee. According to Ellie, they are “hairier, hardier and way calmer than their continental cousins”. She talks to one of the directors of the black bee project at Edgcumbe, Nick Bentham-Green, and asks him “What’s the problem with hybridising?”, to which he replies that it makes a more aggressive bee. I’m not entirely convinced by this, having kept some incredibly sweet hybrids who would let me stroke them bare-handed like kittens. Perhaps it depends on what sub-species they are hybrids of.

B4/Plymouth university research
Nick told us more about a four year project which is underway, with researchers from Plymouth university looking at anecdotal evidence from beekeepers in the B4 group about keeping black bees. According to the beekeepers, the dark bees fly early, fly in wet conditions and don’t starve out in summer. For the first time this anecdotal evidence will be linked to genetic analysis to check how distinct black bees are in the region. See Plymouth University’s page ‘How do we protect our native bee species?‘ for more on this.

B+ for inspecting
We saw some inspections of the Edgcumbe bees being carried out by bee mentor Kathy Lovegrove and head gardener Lee Stenning. Kathy told us that she was looking for a dark queen, with dark offspring, without any gingery brown stripes from thorax to abdomen. They were also checking temperament and making sure the bees looked healthy, had food stores, eggs and larvae. The beekeepers at the Edgcumbe reserve are working to reestablish the breed, building up numbers of our native sub-species to protect them from hybridisation.

Although the bees being inspected looked dark, ironically the show kept cutting away to distinctly gingery looking bees on flowers. Many people on the British Beekeeping Association Facebook group commented that the shots of these bees were ‘library’ shots used for another programme earlier in the year.

Jo Widdicombe’s rare bees
The programme then went on to feature various other countryside topics, before returning to the black bees later (49 minutes in). This time Ellie visited Jo Widdicombe, who she described as a local ‘rare-breed farmer with a difference’, whose colonies have been found to be one of the purest strains of the dark honey bee in Cornwall. When his colonies were DNA tested, they were identified as almost 100% native black honey bees. It was these ‘genetically pure’ bees that kick-started the colonies at Mount Edgcumbe. He got one of his first sites on the Edgcumbe estate and has had them there about thirty years.

When Jo started looking at Edgcumbe bees, he realised they were quite different looking to his usual bees and had a very gentle temperament. He came across on the show as a steady and gentle man who’s doing good work to look after the bees, as well as providing an apprenticeship for a new beekeeper, Shelley Glasspool. Jo has since written a post for the Bee Improvement and Bee Breeders Association (BIBBA) about his experience filming for Countryfile: BIBBA Countryfile report. It sounds like a lot of the details he gave about working with the native bees got cut out unfortunately – “they just came back to their original storyline which included irrelevant facts like how long I had been beekeeping and how much honey I hope to produce”.

What a shame that most of Jo’s footage got cut out. I don’t usually watch Countryfile but it comes across as quite a fluffy show, the One show of the nature world. I am not a scientist but would like to understand more clearly how the DNA testing for black bees works and how distinct they are as a sub-species. I know manual wing morphometry analysis is also often used to identify them as the veins within the wings of the black bees are supposed to have slightly different measurements.

I am a UK beekeeper who has recently moved from London to windswept, wet Cornwall. I first started keeping bees in the Ealing Beekeepers Association’s local apiary in 2008, when I created this blog as a record for myself of my various beekeeping related disasters and - hopefully! - future successes.
View all posts by Emily Scott →
This entry was posted in Uncategorized and tagged Black honey bee, TV shows. Bookmark the permalink.

26 Responses to Black bees on Countryfile – or are they?