Black bees in the mizzle at Godolphin

The Bee Improvement and Bee Breeders Association (BIBBA) organised a big conference on at the Eden Project in Cornwall last weekend – Sustainable Beekeeping: A future without imports. It was all about the benefits of keeping our native/near native honey bees, i.e. UK populations of dark European honey bees, the sub-species Apis mellifera mellifera.

I didn’t go to the conference, but I did get to see some dark bees during an apiary visit to the National Trust’s Godolphin House, which had been organised as part of the conference weekend.

Bob Black, one of the Godolphin beekeepers, hosted the visit. Over forty of us gathered round in a circle and it quickly became clear that this was a rather expert audience, with some professional beekeepers amongst us. A few had travelled from as far as Ireland and the Isle of Wight – like Cornwall, remote places where distinct bee populations can thrive. I also had the pleasure of meeting a blog reader – hi Alan and Lynn!

As the famed Cornish ‘mizzle‘ came down thick and wet, we squelched round to various parts of the Godolphin estate to see the hives. A few hardy bees were flitting in and out for soggy cleansing flights; they were indeed black in colour.

Sorry for the terrible photos – was too busy listening to Bob to take many. He filled us in on some of the details of keeping the bees at Godolphin – the first dark bee colonies came around seven years ago, supplied by Cornish beekeeper James Kilty. Bob has seen his dark queens mating amongst nearby trees and believes there are now enough dark drones locally for them to be able to maintain the sub-species by mating naturally.

Bob sells around twelve dark bee nucleus hives a year and doesn’t take pre-orders as he won’t know till around May how many he has to sell. He receives around 4-5 emails a week from people wanting to buy native dark bees, some from as far away as Canada!

For varroa control they use Apiguard and trickle oxalic acid. Honey production is not huge but they make enough to sell in the Godolphin shop. Indeed, the latest BBKA Honey Survey 2017 results found the Wales and South West regions were the least productive for honey, with a wet summer causing honey crops to drop to an average 18 lbs per hive.

It may look like dusk in the photo below of one of Godolphin’s buildings but was actually around 1.30pm. Bob told us feral bee colonies nest among some of the buildings but tend to last only a couple of years before dying out.

We walked on to the main apiary site which the public can view. The Godolphin poster below says the bees are particularly special for a number of reasons:

I will have the chance to see for myself if this is true this summer as I have ordered a nuc now 🙂  There may be a commercial angle to promoting the benefits of dark bees, as it gives Cornish bee breeders a unique selling point. I would prefer to have local bees as I have found the climate here is slightly different to London, warmer but wetter.

Bob posted this quote from one of the attendees on the Cornish Black Bees Facebook page:

“A great afternoon at Godolphin today, hosted by Bob Black as part of the BIBBA weekend. Beekeepers from Ireland, Essex, blogland and Redruth joined together to hear about the realities of retaining a local bee population – against all odds. I really enjoyed talking to the representatives from Ireland ‘s Native Bee Association who are battling to save what we may have already lost – a true native bee. An interesting dilemma for them – they want ban imports of bees but, beekeepers want to export their bees because others want the native black bee – and you can’t have it both ways! Thanks Bob for hosting this event, and asking WCBKA to be part of it.”

Moving from creatures of the air to creatures of the water – I met our native garden frogs for the first time this week. When we moved in during November I assumed our pond would have frogs, but we never saw any – until they came and said hello outside our door in spectacular style! Four to six little heads can now regularly be seen bobbing up and down in the water. If I can keep both my bees and my frogs happy this year I will be very happy too! 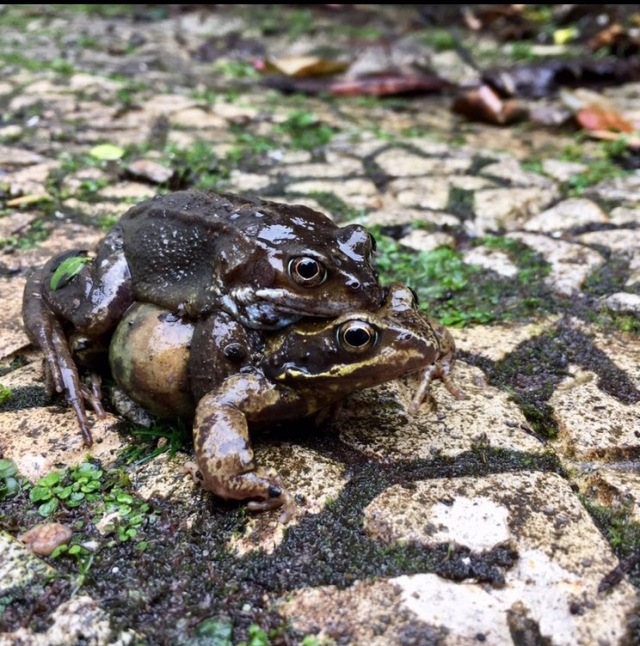 I am a UK beekeeper who has recently moved from London to windswept, wet Cornwall. I first started keeping bees in the Ealing Beekeepers Association’s local apiary in 2008, when I created this blog as a record for myself of my various beekeeping related disasters and - hopefully! - future successes.
View all posts by Emily Scott →
This entry was posted in Uncategorized and tagged Black honey bee. Bookmark the permalink.

21 Responses to Black bees in the mizzle at Godolphin