I was alerted to this new documentary on Netflix all the way back in January by Ron Miksha, who writes the fantastic Bad Beekeeping Blog, here’s his post on it – Rotten: Lawyers, Guns  & Honey.

Well, I finally got round to watching it! If you follow bee news, a lot of the Lawyers, Guns & Honey episode probably won’t be new to you, but it’s a fascinating insight into the behind the scenes work of testing honey and protecting consumers from the ever-persistent honey scammers. For those of you who don’t have Netflix, here’s my notes on the episode. 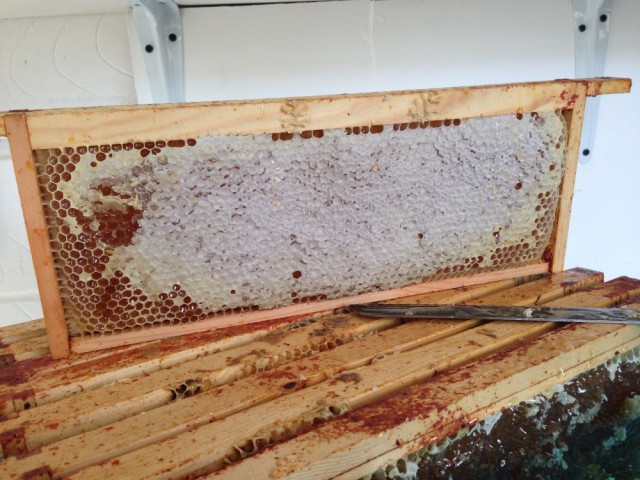 Lawyers, Guns & Honey is all about how the lure of quick cash has spawned an undercover world of honey crime, with suppliers passing off honey diluted with sugar syrup or tainted with antibiotics as the real deal. To combat this honey testers must compete in an ongoing arms race of ever-more ingenious tests, which the honey fraudsters somehow keep finding a way to combat.

We heard that the amount of honey bee colonies make keeps dropping, yet honey consumption is soaring as people become more interested in natural products (sources weren’t given for these stats, so they may be US only figures). There are middle-men honey packers who make a living from buying in large quantities of honey and blending honeys together in huge vats, to make an end product which is easier for food manufacturers to use.

The US government has put extra import taxes on honey imported from China, to try to even the playing field for American beekeepers. But this is easily circumvented by importers who put a different label on the Chinese honey and route it through a third-party country like India, Malaysia or Russia on the way to the US. Government testing is rare – most testing is done by packers and testers to protect their business against food fraud.  However – perhaps surprisingly – this testing is not required by US law.

Germany is the second biggest importer of honey (‘honig’) after the US, with honey being part of a traditional German breakfast. Gudrun Beckh, Services Managing Director at the German lab testing company Quality Services International, explained to us how the firm tests each sample by both taste and smell before putting it under the microscope. Taste and smell indicate authenticity, while pollen analysis is used to determine geographical origin. But of course, pollen can be filtered out.

A new method has been developed which is much harder to beat – for now. Using ‘Nuclear Magnetic Resonance’ (NMK) techniques, scientists can measure the magnetic fields of individual atoms to create a molecular fingerprint. This is checked against a database of honeys from around the world. For the moment this is an effective tool.

In 2008 employees of the international trade company Alfred L.Wolff were convicted in the largest food fraud case in US history – nicknamed honeygate. Large quantities of ‘Russian’ honey were being imported by Wolff, but when tested they were identified as Chinese honey samples. Federal agents seized documents, shipping records and samples of honey.

One particular purchase order, no 995, proved instrumental in establishing the guilt of National sales manager Stefanie Gisselbach. Just as Gisselbach was at the airport waiting for a flight back home to Germany, where it would have been difficult to extradite her from, agents found the vital evidence they needed. Email trails showed that the honey purchased in order 995 contained chloramphenicol, a powerful antibiotic fed to bees to keep them healthy – illegal in the US because the resulting honey can be fatal to humans who consume it. When Gisselbach discovered this, she followed instructions from head office to sell it on at a fire sale price.

Faced with the evidence, Gisselbach agreed to cooperate and eventually 27 individuals/companies were charged; nine defendants pleaded guilty while ten defendants are currently fugitives living in countries outside the US. Indeed Gisselbach, who was fairly new in her role, was probably only continuing with procedures to cover up fraudulently relabelled Chinese honey which were systematic before she arrived in post. You can read more about this in an Open Magazine article, Honey Laundering by Sabrina Buckwalter.

How this affects US bees and beekeepers

The value of beekeeping is already in question for commercial beekeepers. There are now over a million acres of almond orchards in California. Trends in healthy eating are driving consumers towards using almond milk and almond flour. Due to competition from cheap imports, most US beekeepers would struggle to make a profit from producing honey alone – so they turn to commercial pollination of crops like almonds.

Predictably, acres and acres of just one plant species isn’t great for bees. Every year most of the honey bee pollinating power in the US is brought to one concentrated area. All the bees from different operations mixing together, plus the chemicals and fungicides sprayed on the orchards, is not a healthy mix.  The beekeepers have to supplement their feed with sugar syrup because the almond trees produce more pollen than nectar. The bees are burning more calories pollinating the trees than they’re bringing in.

The money at stake and the difficulties in keeping healthy colonies tempts a few to the dark side. Thousands of bee hives have been stolen from sites in the California valley, with evidence pointing to professional beekeepers being the culprits.

The poet of the episode

Special mention should go to Norberto Garcia, the eloquent President of the International Honey Exporters Organisation, who came out with some lovely quotes, telling us there’s an “unstoppable depth to the bees, there’s so much detail to what they do” and “There’s some romances about bees. Romances are not so easily explained”.

Anyone who has kept bees will know what he means – despite all the times you’re hot, sweaty and have angry bees pinging off your veil, there’s something about bees that gets to your heart. Let’s support local producers who we know look after their bees well and create good quality honey. Look at the label when you buy a honey; if it seems very cheap, you might want to ask yourself why. 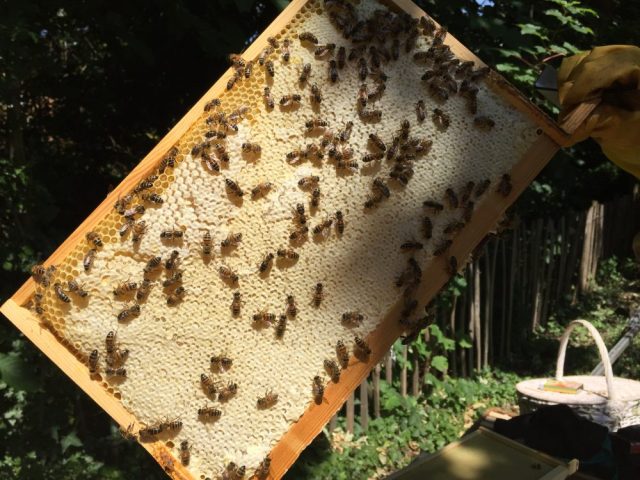 I am a UK beekeeper who has recently moved from London to windswept, wet Cornwall. I first started keeping bees in the Ealing Beekeepers Association’s local apiary in 2008, when I created this blog as a record for myself of my various beekeeping related disasters and - hopefully! - future successes.
View all posts by Emily Scott →
This entry was posted in Uncategorized and tagged TV shows. Bookmark the permalink.