Notes from Cornwall Beekeeping conference talks – Bit of a Do 2018 (1.)

The first exhibit as soon as you walked in was an Asian hornet nest and special hornet proof ‘Ultra Full‘ suit made by BBWear. The hornet is on everyone’s minds at the moment as we’ve just had three sightings in Cornwall – two nests have been destroyed in Fowey now and a single hornet sighting confirmed in Liskeard. We are an Asian hornet hotspot 😦

Look closely at the nest in this photo and you can see a couple of little orange heads poking out, these hornets died just before they could hatch. The nest itself is quite remarkable, it’s amazing what insects can create. Like a wasps’ nest it is very fragile and light.

There was a lot of discussion about the Asian hornet in the final Q&A session, including the best type of bait to use and whether monitoring traps should be put out.

Most of the five panellists (Dan Basterfield, Chris Park, Anne Rowberry, Dr Peter Kennedy and Will Steynor) were in favour of using monitoring traps in spring and checking these daily to remove any beneficial pollinators. Dan Basterfield goes as far as sticking his hand in the trap to let any European hornets climb out on him! Some of the panellists were in favour of using killing traps in the autumn as they believe most of the insects trapped at that time of year will be wasps.

Different bait seems to be successful in different areas. Dr. Peter Kennedy, a field ecologist, mentioned that in Jersey protein based baits have not been that successful. There they use a specialist wasp attractant – the name sounded like ‘Sectera’ (edit: thanks to Di and Chris for confirming in the comments that it’s Suterra). In Spain the hornets seem more attracted to fish based baits – prawns are often used. There has been speculation that the hornets may have reached the island of Majorca on fishing boats.

There was also a question about a proposal in the new Agriculture Bill that bee imports should be banned and that all beekeepers should be registered. Dan Basterfield, who is a commercial bee farmer, felt that banning imports would not stop bees being brought in within people’s pockets. Anne Rowberry, a master beekeeper from Avon, was in favour of banning imports, particularly as the small hive beetle is now in Italy, where many of our imported bees come from. One of the panel noted that Jersey has compulsory registration but there are still unregistered beekeepers there.

This was the winner of the Gadget competition – a useful stand for all your equipment during inspections. 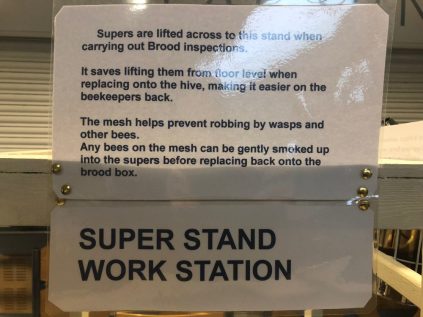 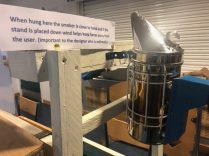 It holds your smoker too

I am a UK beekeeper who has recently moved from London to windswept, wet Cornwall. I first started keeping bees in the Ealing Beekeepers Association’s local apiary in 2008, when I created this blog as a record for myself of my various beekeeping related disasters and - hopefully! - future successes.
View all posts by Emily Scott →
This entry was posted in Events and tagged Asian hornet. Bookmark the permalink.

8 Responses to Notes from Cornwall Beekeeping conference talks – Bit of a Do 2018 (1.)