Surrounded by bees: a tale of four swarms

What happens when a beekeeper gets behind on their inspections in May?

SWARMS. This was the first:

It was rather high up…

The hives underneath are my comical attempt to tempt the bees down. I smeared lemongrass oil inside the empty hives and waited. Soon, a swarm moved in. But not the swarm I was expecting!

So the nucleus is now occupied with what is presumably either a different swarm or part of the tree swarm (if it had multiple queens?!). And a few weeks later, the bees in the tree remain stubbornly there. It seems this tree is their chosen permanent location. If you stand under the swarm and look all the way up, yellow comb is now visible. I have to admire their toughness in the face of some pretty serious wind, rain and hail since they moved in, but I fear they won’t last the winter.

The next swarm arrived a few days later, settling on a wall near my in-laws’ back door. 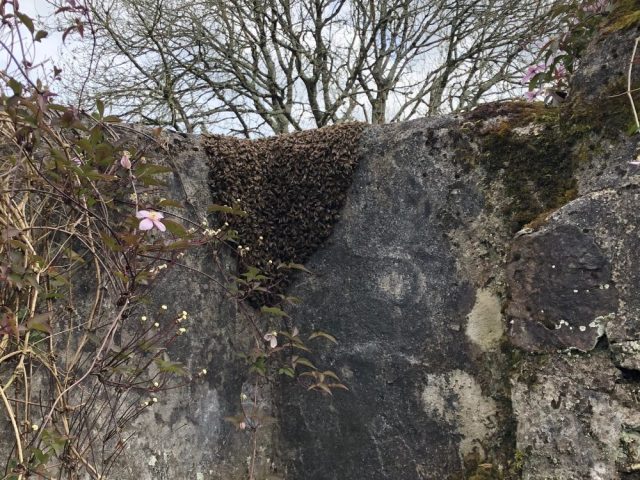 Shaking the wall wasn’t going to do much, so to collect this one I held a empty nucleus hive underneath and gently brushed the bees downwards into it. Not quite bee by bee but it did take a while! I was lucky enough to spot a mated queen, she tried to hide in the centre of the cluster but I managed to brush her into the box. As soon as she was in I knew the rest would follow. I turned the nuc entrance to be a queen excluder and gave them a frame of honey from one of my other hives, along with frames of foundation.

Can you spot the queen? 😉 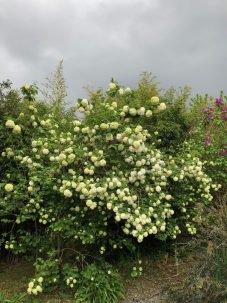 The third swarm arrived last week. The bees considerately came on a day I had off and in a tree low enough to reach! As he has a few inches on me, Drew stood on a precarious plastic chair with some secateurs and gently lopped off the branches into yet another nucleus box.

By now I was thinking “This must be the last swarm”. Wrong! While on an anniversary weekend by the sea, the most recent (I will not say last anymore) swarm descended on a honeysuckle bush. Once I arrived back I took a look and observed some frantic waggle dancing happening on the surface of the swarm.

As I sat nearby on the lawn with Tommy, suddenly the bees took off, filling the air above us. The bees passed over our heads, not in one coherent mass but moving as thousands of individuals in one direction. Gradually they moved past the house and into the distance, moving too far for our eyes to follow them. It was quite something to sit underneath them while they swirled over us.

Once they had gone, a few bees returned to the branch they had been on. These must have been scout bees returning to the swarm too late. I had never thought about it before, but of course a few scout bees are inevitably left behind, as they are still out scouting when the colony decides on a permanent location. I have since read that these scout bees will sometimes return to the old colony they swarmed from.

By the way, when I last inspected Nessa the bees had produced queen cells in the super. These bees don’t like to make things easy.

If you’re thinking of visiting Cornwall, this is a nice spot. Trevaunance Cove, near St Agnes. Tommy hated the beach (too sandy!) and the sea (too wet!) but zoomed up a sheltered path along the cliffs with freakish toddler energy. The delicate scent of apple blossom filled the air. The pretty white flowers of hawthorn (May) were out too, attracting bees and hoverflies. The path was its own little sheltered microclimate, surprisingly still and warm after the windswept beach below, with handy benches in every possible place along the way up so that you could take in the view. A lovely place.

I am a UK beekeeper who has recently moved from London to windswept, wet Cornwall. I first started keeping bees in the Ealing Beekeepers Association’s local apiary in 2008, when I created this blog as a record for myself of my various beekeeping related disasters and - hopefully! - future successes.
View all posts by Emily Scott →
This entry was posted in Swarms. Bookmark the permalink.

15 Responses to Surrounded by bees: a tale of four swarms