London has been basking in a heat wave this week. I can’t remember the last time I looked at the BBC weather forecast and saw three dazzling consecutive days of suns up there. It’s been 21C today and the bees were loving it, zooming back in with bulging pollen baskets.

The apiary today. Mine is the second hive on the far right, next to the similarly sized chocolate brown hive.

Inside the hive they had drawn out eight combs, with only two out of their ten left untouched (the dummy board makes up eleven frames). My hive partner, Emma, has kindly offered to put a super on next week, and then the honey harvest can begin!

Here are some uncapped larvae with beautiful white honey towards the top of the frames. Emma commented that the bees on frames with larvae on always seem calmer, going about their business slowly and methodically with less of a frantic pace than bees on other hives. Perhaps because they are the younger nurse bees, or because the brood pheromones and those of the queen, who is likely to be nearby young brood, keep them calm? 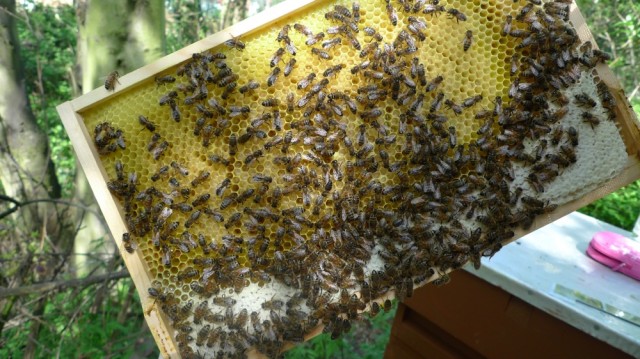 And, best of all, our first sighting of capped brood since we put the bees on new foundation three weeks ago. Worker bees take 21 days to emerge from egg to larvae, so next week we should see plenty of fuzzy young bees ready to take over from their older sisters. 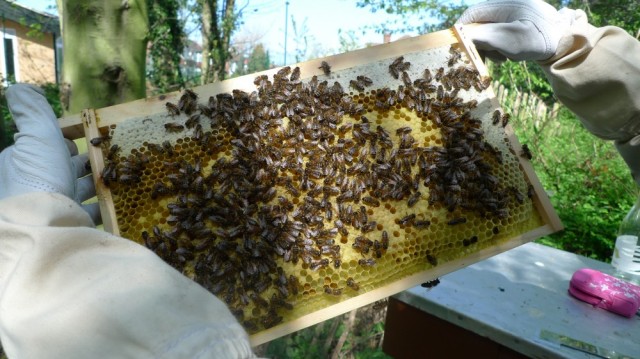 On the frame tops I saw some dots which I was worried at first might be dysentry, but looking closer they seem too reddy brown and the wrong texture for dysentry, so hopefully just propolis from their helpful attempts to stick down the queen excluder. Lots of hob-nobbing going on in this photo.

After having a little picnic we headed over to the local scout hut for a talk by Andy Pedley on swarm control and swarm collection. Andy is very experienced in collecting swarms and had some funny stories to tell us. Just yesterday he had two phone calls about swarms, neither of which turned out to be worth following up. One turned out to be about a colony living in a roof – not exactly an easy place to collect from – and the other was about “big fluffy things” – bumbles, not honey bees then. Andy said the first thing to ask a caller is “What exactly do you see?”, because the general public may mistake a lot of stripy flying things for bees. A football size ball of bees is what he wants to hear.

The second question to ask is “How high up is it?”, again something the general public is bad at estimating (me included). Twenty five feet up is not going to be doable. If the bees are on a branch which can be cut off and put on a sheet on the ground, then great. Put a basket or box over the top with a wedge underneath to lift it up slightly. The bees under the box will appreciate the dark cavity and start fanning Nasonov pheromone to attract in any stragglers such as flying scout bees. Leave the box an hour or so or until dusk, by which time all the bees are hopefully inside. Turn the box the other way up with the sheet over the top.

Take the swarm to their new home. Either place a board in front of the hive and shake the bees in front of the entrance so that they walk up the board and in, or take the less romantic option of shaking them in through the roof. If shaking in through the roof you can place a queen excluder above the entrance to stop the colony absconding. Putting a frame of brood from another hive will also encourage them to stay. It helps the colony if you feed them a weak sugar solution, but wait 48 hours until wax-building and foraging are under way before feeding. This ensures that any disease contaminated honey brought in the bees’ honey stomachs is used as energy for wax secretion and not stored in the frames.

I am a UK beekeeper who has recently moved from London to windswept, wet Cornwall. I first started keeping bees in the Ealing Beekeepers Association’s local apiary in 2008, when I created this blog as a record for myself of my various beekeeping related disasters and - hopefully! - future successes.
View all posts by Emily Scott →
This entry was posted in Swarms and tagged Andy Pedley, shook-swarm. Bookmark the permalink.