Not so super after all

Yesterday my hive partner, Emma, had put a super on our hive as we thought it wouldn’t do any harm to have one on there ready for all the loads of honey we’re going to get this year.

Today I told Alan, the beekeeper who kindly helped me shook-swarm, that we had put the super box on, but he advised us to take it off. So the super has been moved away for now! Alan told us we should wait till our colony has really built out all the frames and the box is heaving with bees before putting another brood box on, and then wait till that is also spilling over with bees before putting a super on. He keeps all his colonies on a double brood box and believes it really helps a colony survive the winter if it is bigger and has more stores for food and insulation. The bees are less likely to swarm on a double brood box system, and the queen will lay more eggs in the extra space, so you get more bees. There are a few disadvantages – some beekeepers at the apiary are against it as inspections are made more difficult and you may be more likely to miss queen cells with twice the number of brood frames. You get a bit less honey too, although Alan still gets loads in his locations.

This makes sense to me as I overwintered mine in a double brood box and they did better than most of the hives in the apiary. Most of the other hives have been quite slow to build up so far this year and only have bees on four-five frames compared to the nine frames our bees have now drawn out. Alan told us he thinks our bees will never really do well in the shady location they’re in down at the apiary! Emma’s been trying to hunt down alternative locations, perhaps in a kind person’s garden in exchange for some honey, but it’s hard to find places. Having a garden is a bit of a luxury in London. I have one but it’s tiny and shared with my sunbathing neighbour and her dog, so that’s not going to work.

We had a look through and they all look fine, the queen was spotted plus more capped brood and even a bit of drone brood now, for the first time since shook-swarming. In the photo above you can see a bit of the many colours of pollen they’re storing. I like observing the colour variations in the bees too. Some of them have lighter caramel brown abdomens, others are quite black. 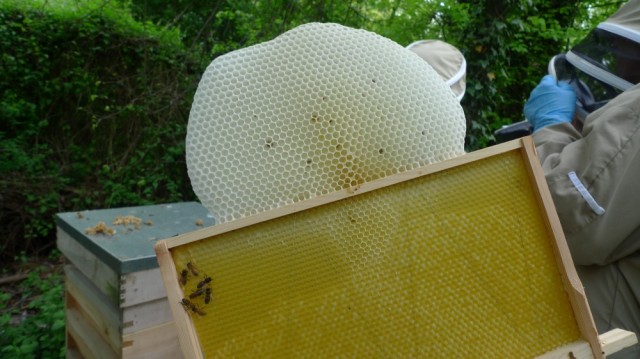 Above is what happens when you give naughty bees a bit of extra space to build in – beautiful natural comb, but not where the beekeeper wants it. This was in someone else’s hive.

Hopefully you can see here the structure of the comb. A bit of pollen has been stored inside but otherwise they haven’t done much with it yet, so you can see through to the cell walls on the other side. Each cell is a precise hexagon, offset from the cell on the reverse side. First thick layers of wax are placed at the base of what will become each comb, these are drawn out into cells by elongating and thinning the wax out to form the cell walls. Worker cells are about 5.2-5.4 mm in diameter, drone cells are wider at 6.2-6.4 mm.

Time for a bit of wine and relaxing now I think 🙂

I am a UK beekeeper who has recently moved from London to windswept, wet Cornwall. I first started keeping bees in the Ealing Beekeepers Association’s local apiary in 2008, when I created this blog as a record for myself of my various beekeeping related disasters and - hopefully! - future successes.
View all posts by Emily Scott →
This entry was posted in Colony management and tagged double brood box. Bookmark the permalink.

17 Responses to Not so super after all