A quintet of queen cells

Everything was going so well. Both of our hives seemed fine. Until today.

All was fine and dandy in Rosemary’s hive. It took a while to get in there – they had propolised down the entire queen excluder and it took ten minutes just to prise the super off – but inside all was business as usual. Lots of bees, lots of honey, lots of brood. A rare ray of sunshine pierced through the apiary’s leafy canopy and shone on the glistening nectar of this frame. 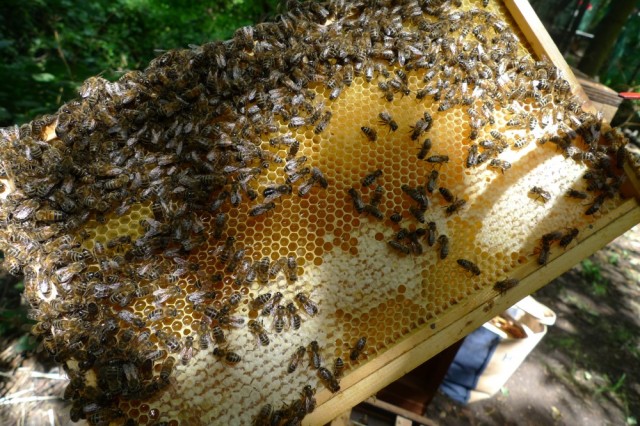 A frame full of lovely biscuit coloured brood, with drone brood along the bottom.

And Rosemary… can you see her blue dot there? Now imagine trying to pick her out without the dot.

Check out the huge pile of propolis and wax we spent ages prising off the queen excluder. We must get a proper wooden framed excluder instead of the flimsy plastic one we currently have, the gap the frame creates stops them propolising the thing down. One of Albert’s yellow New Zealand bees is investigating. 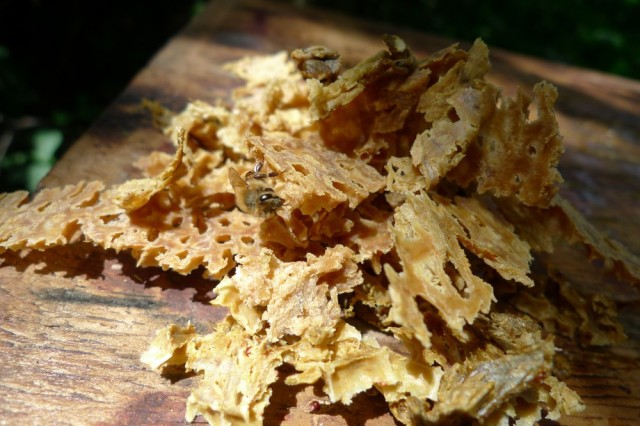 Onto Rose’s hive. This being the smaller hive made from a artificial swarm back in May, we have no super on it. So we were expecting an easy inspection, with no queen excluder to prise off. How wrong we were…

We found five queen cells, no Queen Rose and young larvae but no eggs that I could see – but then in the dark of the apiary it’s easy to miss eggs. The bees were not exactly aggressive, but more restless and flying up around the hive more than usual. One queen cell was uncapped and the other four capped.

So what are they up to? This is what I always find hard to work out! If they’re superseding Rose, why produce so many qcs? If they’re thinking of swarming, how would that make sense when it’s late in the swarm season, they’re a small colony and have plenty of space? The five queen cells were also spotted when one of the beekeepers did his Basic Assessment Exam on our hive on Tuesday.

Hopefully if we assume that they’re superseding Rose and leave them to get on with it a new queen will emerge victorious and kill any rivals. There was talk of obtaining a new queen from another beekeeper who had a mated queen spare, but that’s fallen through. The new virgin will have to mate, which will set the colony back a few weeks in brood production. That’s a shame but at least we get a nice new young queen in there and we have another hive doing well.

I was interested to read in the July issue of BBKA News that starting from 2012 the British Beekeepers Association are now running two exam dates a year for their Module exams – March and November. This is due to an increase in demand now that the BBKA has had a vast increase in members. I had been thinking of taking Module 3 on diseases in March 2012, but that will be run in November 2012, so instead I think I’ll take Module 2, ‘Honey bee products and forage‘ in March, or possibly Module 5, ‘Honey bee biology‘ if I’m feeling brave enough. In some ways Module 5 might be better as it overlaps a bit with Module 6 on Honeybee behaviour which I took in March, but I think remembering all the scientific names would be tricky for me.

I am a UK beekeeper who has recently moved from London to windswept, wet Cornwall. I first started keeping bees in the Ealing Beekeepers Association’s local apiary in 2008, when I created this blog as a record for myself of my various beekeeping related disasters and - hopefully! - future successes.
View all posts by Emily Scott →
This entry was posted in Colony management, Queens. Bookmark the permalink.

10 Responses to A quintet of queen cells