What are they up to now?

To my despair yesterday was a classic British summers day: dramatic grey clouds and rain coming down harder than a power shower. The week before we’d left five queen cells in Rose’s little hive. Me and Emma wanted to see what was going on!

By late afternoon things had improved slightly so we took advantage of the momentary lapse in rain to do some beekeeping. I looked in the entrance of Rosemary’s big hive and saw this:

A blanket of bees! All snuggling up to each other as if to provide a layer of insulation against the cold rainy air getting in. It was the same in other hives round the apiary. I’ve heard of bees hanging outside the entrance in hot weather to cool themselves and the hive down; this clustering just inside the entrance presumably must be behaviour aimed at keeping the brood warm and cosy? They were not aggressive despite me poking my camera in.

We left the big hive alone and took a peek in Rose’s hive. 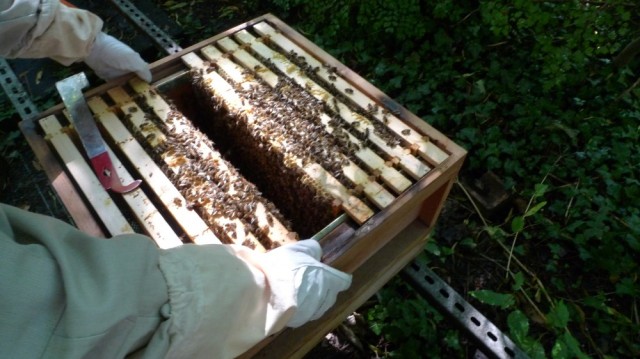 They’re on about seven brood frames now (with no super). They are being slow at drawing the remaining frames out. It won’t help that Rose appears to be MIA. No eggs or uncapped larvae this week. Of the five queen cells last week, we could only see two, both capped. The bees were clustering round the cells and looked like they were chewing at the ends. What has happened to the other queen cells? Were they destroyed by the workers or have some of those queens emerged already?

I read a very interesting article this week, ‘Piping queens that toot and quack‘. It mentions that workers sometimes stop a new virgin queen from destroying her rivals (perhaps as a safety net in case she goes missing during her mating flight?). Meanwhile they also can keep other mature queens trapped in their cells, pushing their cell caps back down and adding more wax. These trapped queens, or princesses-in-waiting, often produce a low frequency ‘quacking’ noise by vibrating their abdomens against the cell walls, as if to say ‘let me out, let me out!’

So we may have a virgin queen on the loose in our hive, or we may not. The bees keep their secrets close. The other mysterious thing they are up to is chewing holes in their comb. This seems to be happening on the outer combs, and sometimes the holes are big and jagged and other times perfectly round where they have chewed neatly through a cell. Anyone have any ideas why bees might start eating their wax? 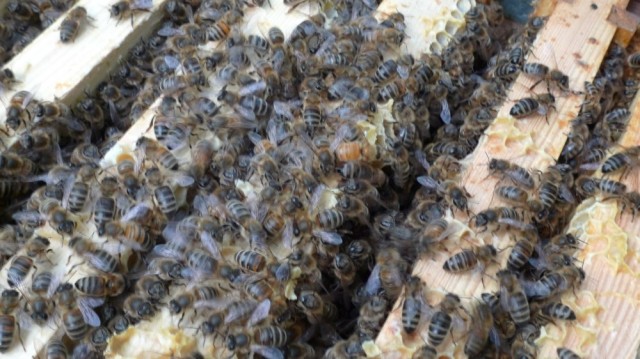 Can you see the one golden bee above? We thought it might be a refugee from Albert’s New Zealand hive, perhaps allowed in because she had pollen or nectar to offload. None of Rose’s dark daughters are so amber.

While inspecting Emma noticed a bee with a white stripe on the top of its thorax, just under its head. I couldn’t get it to rub off, so I thought at first it was a genetic mutation rather than pollen. But then we noticed other bees around the apiary bearing similar badger stripes, and remembered hearing about Himalayan Balsam, which leaves a telltale white streak on bees which visit it. The pollen rubs off from stamens in the roof of the flower and the foragers are unable to groom it off themselves because it’s so high up on their thorax. Nice photos here: http://cabinetofcuriosities-greenfingers.blogspot.com/search/label/Himalayan%20balsam.

I am a UK beekeeper who has recently moved from London to windswept, wet Cornwall. I first started keeping bees in the Ealing Beekeepers Association’s local apiary in 2008, when I created this blog as a record for myself of my various beekeeping related disasters and - hopefully! - future successes.
View all posts by Emily Scott →
This entry was posted in Queens. Bookmark the permalink.

11 Responses to What are they up to now?