A 9th revision post for the British Beekeeping Association’s Module 1 exam, Honeybee Management, which I’m taking…on Saturday (arrrgh so not ready!). I’m at 1.15 on the syllabus:

“The Candidate shall be able to give a detailed account of:- the value of honey, pollen, water and propolis to the honeybee colony;”

This is one of the easier points on the syllabus, as I find it more interesting than frame sizes.

As all beekeepers know, honey bees must collect nectar to create their honey. On average loads of 30-50mg of nectar are collected by a forager – quite impressive considering a honey bee weighs about 100mg. Each year an average honeybee colony requires around 120kg of nectar. Approximately 70kg of this is eaten during the summer months to provide food for the brood and adults for their nutrition, for extra energy to keep the brood warm, and to provide energy for foraging. The remainder of the nectar – 50kg – is converted to around 20kg of honey stored in the nest for the winter months. (David Aston & Sally Bucknall, Plants and Honey Bees: their relationships, 2004). 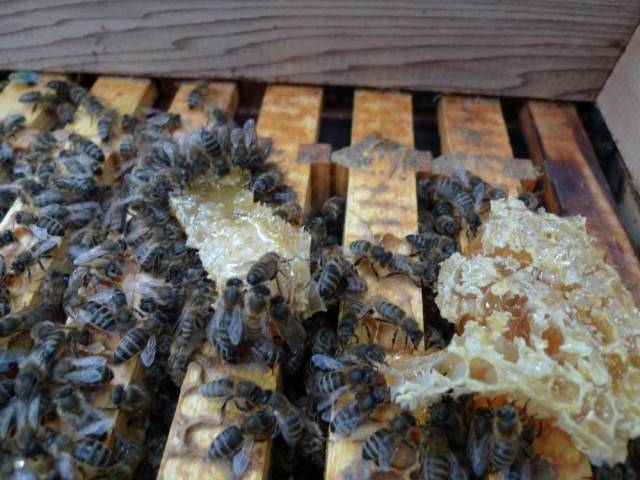 Despite all this hard work, collecting so much nectar is obviously worth it. The efforts of the spring, summer and autumn bees enables the colony to overwinter safely on their stores, whereas bumble bee colonies must die off in autumn, leaving only a mated queen to hibernate and begin again in spring.

What do bees obtain from honey? It is basically a concentrated sugar solution, mainly consisting of fructose and glucose sugars with a small amount of sucrose also present. The ratio of fructose to glucose varies considerably between honeys, depending on which  nectars were collected by the bees. The workers evaporate water from nectar to reduce the water content down to 17-18% before it becomes honey. Chemical changes to break down the sugars, due to enzymes added by the bees, also aid this process. This sugar rich solution gives the bees carbohydrates – energy! Without it they will die – they cannot live on pollen alone.

It’s worth noting that nectar varies considerably in sugar & water content – it can consist of as little as 20% or as much as 70% water depending on the plant species and local environment. Even flowers on a single plant can vary on how much nectar they provide and how sugary it is, depending on factors such as how close to the ground they are or how much sunlight they’re in. So the more sugary the nectar, the less work it takes, and the less nectar is needed, to produce honey which contains 17-18% water.

Capped super frames being removed by Albert, one of the other Ealing apiary beekeepers, last year. 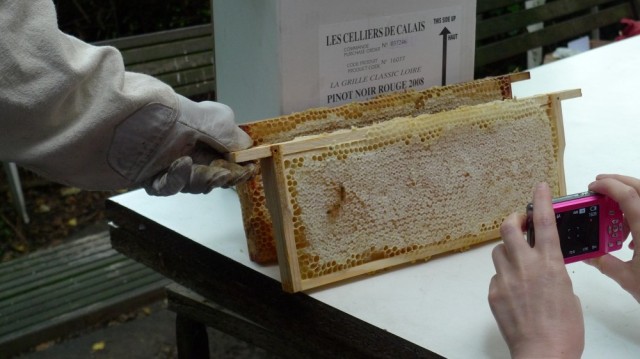 Pollen is incredibly important to keep honey bees healthy. It provides them with protein, without which larvae and young adult bees will not develop properly. Preferably the pollen should be from mixed sources, as if bees can only find one pollen it may well lack some essential amino acids (the building blocks from which proteins are made).

Beekeepers seeing bees flying back to their hives laden with bright pollen are often pleased, as this is a good sign that the queen is laying well. But how is the pollen actually used inside the hive?

You can see from the points above that most of the pollen is not actually being fed directly to the brood; it is the young nurse bees who consume the most pollen, during the first 8-10 days of their lives. They must eat it in order to be able to produce ‘brood food’, a mixture of hypopharyngeal and mandibular gland excretions mixed with honey, digestive enzymes and water. Probably tastier than it sounds.

It takes 70-150-mgs of pollen to rear one larvae into an adult bee. On average foragers can collect 16mg of pollen a trip (8mg x 2 pollen baskets), so you can see plenty of trips are needed even for just one larvae. A strong colony will collect 50-100 lbs of pollen during a season. Adult bees can rear brood for a short time if fed a pure carbohydrate diet, but to do so they must break down their own body tissues to produce the brood food.

A reassuring sight: bees returning to the hive laden with pollen (taken in Sept 2011) 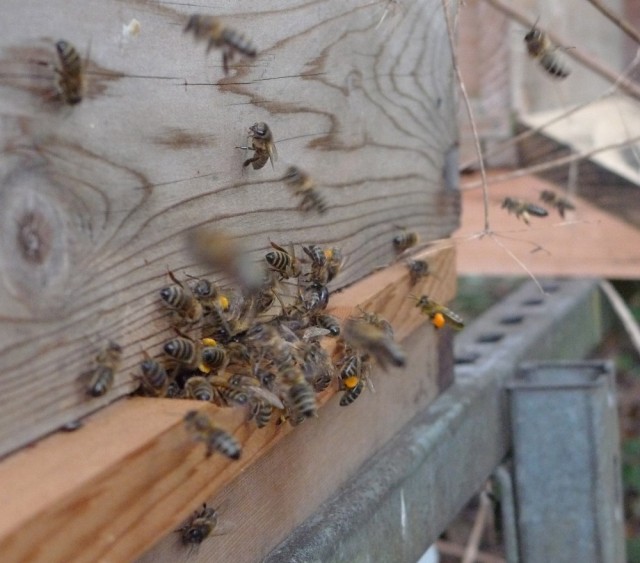 A hive needs five to six litres of water per day in midsummer. In hot weather it is used for cooling by hanging it through the brood nest in tiny droplets. At the same time workers fan their wings to increase its evaporative power.

When it is needed, foraging bees are encouraged to collect water by the hive bees. Foragers returning with water or very watery nectar have their load taken enthusiastically, in under 60 seconds, while those returning with concentrated sugary nectar have difficulty finding a younger sister willing to take it from them. As the hive temperature cools down, water will be less excitedly received – water unloading times greater than 180 seconds almost eliminate water foraging (Lindauer, 1954).

Water’s use in cooling the hive is well known amongst beekeepers, but perhaps less realised is that larvae need water, as it is a large component of ‘brood food’, a mixture of hypopharyngeal and mandibular gland excretions mixed with honey, digestive enzymes and around 70% water. Water is also used by adult bees to dilute honey stores before they feed. Ann Chilcott has observed bees in the Scottish Highlands collecting water in winter at temperatures as low as 4.2-4.5°C (BBKA News, February 2018, p.60-61). 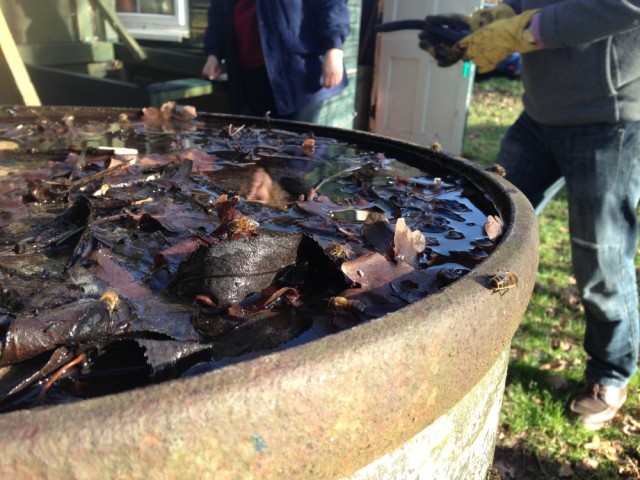 Above: bees drinking from a water butt.

Most beekeepers know propolis as that sticky reddy brown stuff that sticks the hives together and gets all over your nice clean beesuit.

But perhaps we should appreciate propolis more, as it seems to be remarkably useful for the bees, who use it throughout the hive, despite only collecting about 100g a season. It is a resinous substance secreted by some plants, particularly trees such as poplars. Like nectar, the composition of propolis varies considerably between plants, but it often contains mostly resins and balsams, plus about 10% essential and aromatic oils, as well as waxes, various acids, flavonoids and other compounds. This mix gives propolis disinfectant properties which help act against bacteria, fungi and even viruses. So if anything we should be breeding for bees which use plenty of propolis!

Some uses the bees find for it:

Below is a photo taken by @Loiscarter of the home-made mouse guard her bees made, quite spectacular. A great example of its use to defend the walls of the colony. She originally posted this at http://twitpic.com/5t1byf 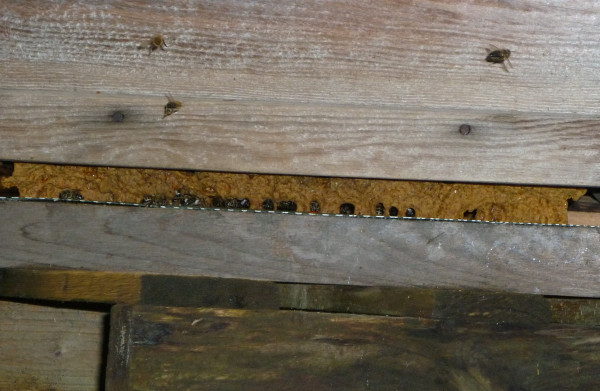 I am a UK beekeeper who has recently moved from London to windswept, wet Cornwall. I first started keeping bees in the Ealing Beekeepers Association’s local apiary in 2008, when I created this blog as a record for myself of my various beekeeping related disasters and - hopefully! - future successes.
View all posts by Emily Scott →
This entry was posted in Exams, Honey and tagged Module 1, pollen, pollination, propolis. Bookmark the permalink.