Exams over – and the Bailey comb exchange begins…

After months of revising, I finally took the British Beekeeping Association’s Module 1 Honeybee Management exam on Saturday. It’s a relief to get it out of the way – I can finally start on the pile of non-beekeeping related books I haven’t been able to read! The revising has been mostly fun really though, I like learning new things about bees.

The questions weren’t too bad…not too many hive dimensions needed…for the four section B 12 minute questions, I answered ways of clipping & marking a queen, how to make up a five frame nucleus, one way of carrying out swarm control and how to identify queenlessness, a drone laying queen and laying workers in a hive.

For the longer 30 minute section C question, which you get the most marks for, I chose the question on how to advise someone on beginning beekeeping – much easier than the alternative question on preparing bees to take them to heather! That’s a question for the northern beeks.

Home for lunch, then off out to proper beekeeping. It was a beautiful day – 22°C in London! – so a perfect opportunity to inspect our hives for the first time since October. 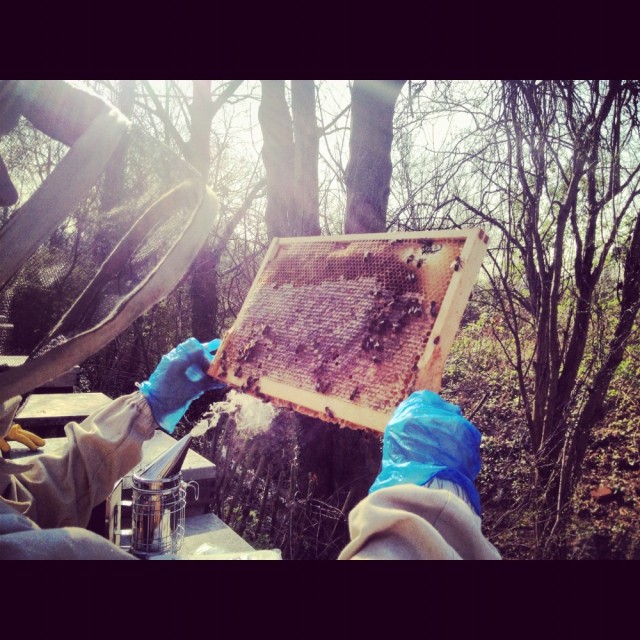 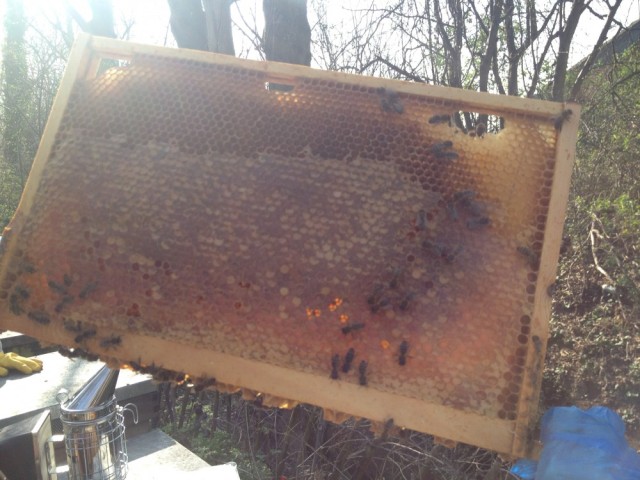 These photos of Emma holding up honey stores may look pretty idyllic, but all was not quite right within Rosemary’s hive. Plenty of adult bees, but also lots dead on the floor. And most worrying, small amounts of brood – less than 3 frames worth – and drone cells in the middle and top of the comb, which is a sign of a failing queen. Usually drone cells would be found towards the bottom of the comb. Only a few eggs could be seen, and it took several goes by different people before Pat was finally able to spot them.

John Chapple brought a frame from another hive over to us. “What can you see here?” he asked. The frame contained lots of drone brood in the centre too. “Yes”, John said, “but look at the bees – what are they?”. They looked like workers in size, but John revealed they were drones, given away only by their bulbous eyes, much bigger than those of workers. The drones were stunted as the result of having been laid in worker cells. They are doomed, unable to reproduce, only able to eat stores. Unless it is requeened, a hive which has a drone laying queen or laying workers can only get weaker and weaker.

Below is a photo from the government’s Beebase website showing domed drone brood in worker cells. Some of those worker size bees have very beady eyes and I believe may actually be stunted drones. The difference is subtle. You can also clearly see a dark drone with damaged wings as a result of deformed wing virus towards the top centre of the photo. 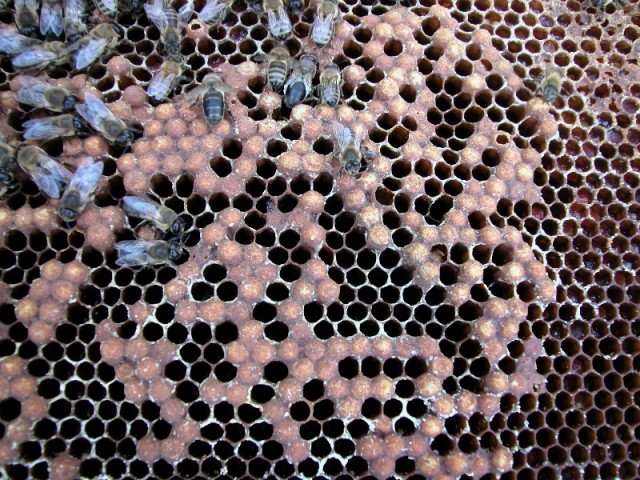 Here’s what Ted Hooper has to say about drone laying queens in his Guide to Bees and Honey, p182:

“The drone laying queen is usually quite obvious when she first starts to produce drone brood in worker cells because these will be mixed in with worker brood. As time proceeds the amount of worker cappings reduces and the number of drone cappings increases. Whilst there are worker cappings left it is obviously a queen laying, and not workers, but as the queen gets progressively shorter of sperm so the time will come when nothing but drone cappings is present. The colony will still be reasonably large – with at least two or three combs of brood – and normally the beekeeper who regularly examines his colonies will see what is happening and will have solved the problem by requeening.”

We saw Rosemary, and we saw a small amount of worker brood, so that appears to be what is happening here. There won’t be many spare queen cells around the apiary in March, but I guess we could order in a queen. Rosemary has been a great queen though, and it would be a shame to lose her ultra-calming genes. We could hope the bees produce a supersedure cell from the few remaining worker eggs now that the weather has improved, or we could put Rosemary out of her misery and combine the workers with Lavender’s hive (Lavender is Rosemary’s sister). Emma and I will have to talk it through and reach a decision.

Incidentally, it is a little odd that she seems to have become a drone layer. She’s less than a year old and there are hundreds of hives producing drones for her to mate with in Ealing, so she shouldn’t be poorly mated or getting old and running out of sperm. Chris Slade has an interesting blog post at http://chrissladesbeeblog.wordpress.com/2012/03/25/darg/ – he says that there is research going on in Devon with regard to the increasing incidence of drone laying queens. Certainly lots of people seem to be having this problem at the moment, and the bee inspectors say commercial US beekeepers have taken to requeening every six months! Wonder if the problem is associated with varroa as is so often the case.

Emma and I changed our minds at the last minute about doing a shook-swarm, as an experiment we’re trying out the Bailey comb exchange method instead this year. The first step is to put a brood box of clean foundation on top of the old brood box. You funnel the bees up by putting dummy boards on the edge of the brood nest in both boxes, which helps keep conditions warm to aid wax drawing, and feed with a 2:1 strength sugar syrup through the crown board. The idea is the bees draw out new combs from the foundation and once that happens you can move the queen up, put a queen excluder between the two boxes and destroy the old combs below once the brood has hatched out. I’ll let you know how it goes.

Emma has done a great blog post with more photos from the day, including Queen Rosemary, the stunted drones John showed us, and more info on the Bailey exchange: http://missapismellifera.com/2012/03/30/bailey-comb-change-for-spring-bees.

I am a UK beekeeper who has recently moved from London to windswept, wet Cornwall. I first started keeping bees in the Ealing Beekeepers Association’s local apiary in 2008, when I created this blog as a record for myself of my various beekeeping related disasters and - hopefully! - future successes.
View all posts by Emily Scott →
This entry was posted in Uncategorized and tagged Bailey comb exchange, drones. Bookmark the permalink.

15 Responses to Exams over – and the Bailey comb exchange begins…