I went to Albania and a lot happened while I was away! Our naughty queen Lavender decided to swarm when our backs were turned. And Emma had to put Queen Myrrh to rest and give her hive a new queen cell, because she had not managed to mate successfully amidst all the rain. Emma has a great blog post about all this action here: The Bad Beekeepers Club. Oh yes, something else that changed while I was away…the never-ending rain finally stopped, sunshine broke out here and rain came to Albania.

So we had a lot to do during our inspections yesterday. Emma has kindly let me use her brilliant photos here.

This was the queen cell Emma took from Lavender’s swarmed hive two weeks ago and put in Myrrh’s old hive. Alarm bells were ringing at the sight of it still being capped. It was already capped two weeks ago; the queen should emerge eight days after the cell is first capped. Sometimes the workers can keep adult queens trapped within the cell by thickening the wax topping, but that is generally done if the colony is considering throwing multiple casts, or after-swarms. That would not have been the case in this little hive.

We asked John Chapple’s advice. He instructed us to shake the bees off the frame and then gently cut the tip of the queen cell off with a hive tool to see what was inside. The queen revealed was obviously a goner, and had been for some time. “I’m no expert” (hah!) John said, “but that looks like black queen cell virus”. Having looked it up at home, this is a virus associated with the spore disease nosema, which is worrying. You can see her tattered wings and black body below.

Another odd thing was found within this hive; I gave Emma quite a jump when I held it up on my hand! It’s not a monster, merely a dead bumble bee I found on the floor of the hive. I asked John about it and he explained her black, shiny body was due to our bees having pulled all her hair off whilst attacking her. She was probably hungry and our bees didn’t take kindly to a robber. A sad ending for a beautiful beast.

It has now been over a month since this hive had a properly laying queen. We had wanted them to produce their own new queen rather than buying in a queen from a different climate, but the weather was against us and this attempt failed. We decided to combine the dwindling bunch of bees with our queen-right colony, using the newspaper method. This technique is much loved among beekeepers for its simplicity and cheapness, advantages close to all true beekeepers’ hearts.

Some newspaper is placed on top of the brood box you wish to add extra bees to. “It’s not the Times”, John commented. No indeed, it was my local free newspaper. That’s how cheap I am. Next, a few little holes can be made in the newspaper with a hive tool. Don’t go too crazy with the holes, as the idea is that the bees chew though the paper gradually and slowly become accustomed to each other’s smell, preventing fighting.

Ta-da! And so two hives become one. By the time we inspect next week they should have chewed through it all and become friends.

I should also introduce our new ruler in Lavender’s old hive. When her retinue decided to swarm and leave us, they left behind some queen cells, which Emma sensibly reduced down to two. I peeked in the hive last week and was lucky enough to spot our new queen. She was still a virgin, so a stubby little thing, but more shockingly than that… ginger. I mentally blinked several times, because many generations of our previous queens have been long dark beauties, black as can be. And here was a vibrant red head!

When we looked in yesterday, we were delighted to find she had mated and grown up into a spectacular queen. I am quite prepared to forgive her for being ginger. We have named her Neroli. This was Emma’s idea, as Neroli is an oil produced from the blossom of the bitter orange tree. I think it’s a beautiful name. From Wikipedia: “By the end of the 17th century, Anne Marie Orsini, duchess of Bracciano and princess of Nerola, Italy, introduced the essence of bitter orange tree as a fashionable fragrance by using it to perfume her gloves and her bath. Since then, the term “neroli” has been used to describe this essence. Neroli has a refreshing and distinctive, spicy aroma with sweet and flowery notes.”

Here she is amongst her dark sisters. Her first daughters are currently mere neatly laid eggs. It will be fascinating to see what colour they turn out. Lavender had obviously mated with some New Zealand drones, but which drones will Neroli have mated with? 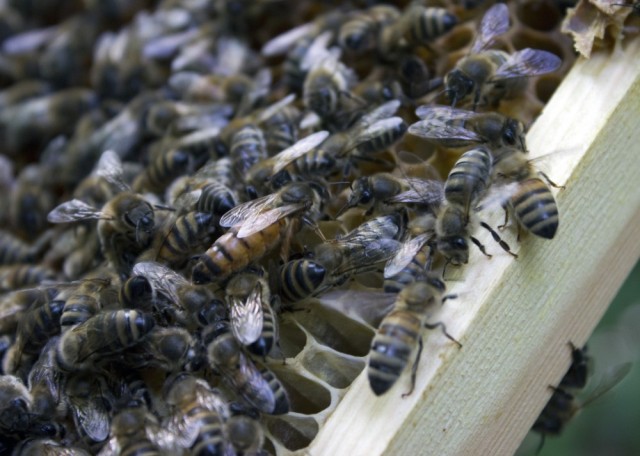 And so we have a new Jubilee Queen! The Diamond Jubilee is this weekend, marking 60 years of Queen Elizabeth’s reign. The nation is celebrating with two extra days off and a lot of drinking. I’m not expecting Queen Neroli to last as long, but I’m hoping she gives life a good go.

Finally, a shout out to Roger at Talking with Bees – www.talkingwithbees.com. This is a new blog which I’ve started following recently and am really enjoying. Roger describes his beekeeping self as “relatively sane with a hint of obsessive enthusiasm”, which I think gives you an idea of his sense of humour. He is very honest about sharing his fears and trepidations on his path to ‘beemanliness’. For those of you interested in the Omlet Beehaus, he has a very nice review of it here: www.talkingwithbees.com/beekeeping/beehaus-review.