Book review – ‘Travels in Blood and Honey: Becoming a beekeeper in Kosovo’ by Elizabeth Gowing

Recently I visited Albania, which is one of the Balkan countries. As Elizabeth Gowing explains in her book ‘Travels in Blood and Honey: Becoming a beekeeper in Kosovo‘, in Turkish, bal means ‘honey’ and kan means ‘blood’.  “The story, almost certainly untrue, goes that when the Turks arrived in the Bal-kans, they immediately saw the potential of a fertile land where you can be happy sipping sweet nectar.  Only when they had discovered how hard they would have to fight to subdue, and eventually lose, the territory, did they understand its second syllable.  And that is how the region got its full name, the land of blood and honey.”

The history of Albania is one of occupation. Despite being only a small country (around the size of Wales) and protected by mountainous borders – along which wolves still roam in a few remote areas – it has long been desired by outsiders. It is bordered by Montenegro to the northwest, Kosovo to the northeast, the Republic of Macedonia to the east, Greece to the south and southeast, and separated from Italy only by the narrow Adriatic Sea. The Turks occupied the land for 500 years, extracting high taxes, and more recently a communist regime was in place until 1991. Under the Communist Party of Albania, leaving the country or owning a personal car was forbidden and many Albanians were imprisoned for years in work camps and jails. Our guide in Albania, Artem, told us that he read smuggled-in copies of 1984 and Brave New World at home in brown covered paper. He learnt English by listening to the BBC World Service on the radio.

Travels in Blood and Honey is not just about beekeeping, it is about everything Elizabeth Gowing experienced while living in Kosovo whilst her husband worked as the Prime Minister’s advisor. It’s about the people, the politics, the language and a lot about the eating. There are many traditional recipes in it involving Balkan favourite ingredients like honey, nuts, butter and yogurt. With the exception of Baklava, I had not heard of any of these dishes before, but I intend to try making some of them.

I think non-beekeepers would enjoy this book just as much as beekeepers, but for those of you who do keep bees, here’s an extract from p168:

“When we arrived at Rexhep’s house, he was bemused but hospitable. He took us around his hives, which were stacked up on the slope near his house. I got out my protective clothing and he sneered a little in the most polite way. He himself was walking round in casual black clothes – the colour I had been told bees are most likely to attack; his jumper was made of wool, apparently a material which also incites bees to sting. He offered to open up a hive, and from behind my mesh hood I accepted happily….As he got out a pack of Marlboro, I discovered that Rexhep’s was the open-necked, cowboy approach to beekeeping. Lighting up, he puffed some of the cigarette smoke out over the bees. A bit of fag ash dropped into the honey cells at the same time, but he wasn’t bothered. The smoke seemed to work, and nothing flew out on the attack as we looked at the bees busy inside the hive.”

To have a land of honey you need two key things – flowers, and bees. Of course I couldn’t restrain myself from trying to take photos of both in Albania. Poppies may grow elsewhere in Europe but they seemed to flower more intensely and exuberantly there, clinging to every nook and crevice they could find, their little heads bobbing bright red in the sun. And not just poppies but every imaginable type of wild flower too, scattered across the road edges and hill tops. 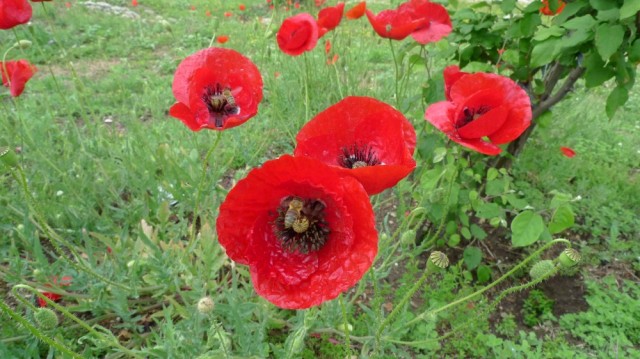 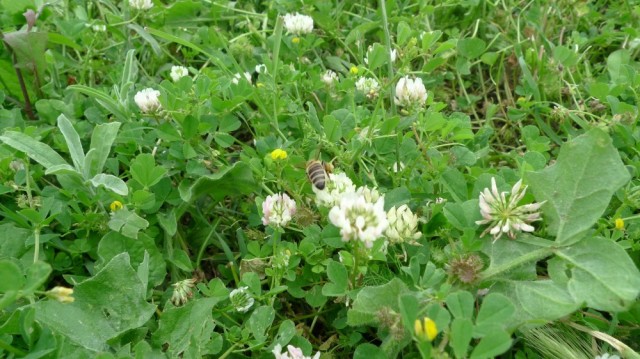 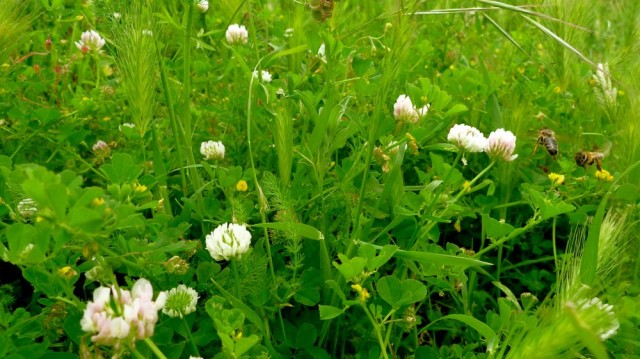 But flowers are constantly disappearing in Albania, as well as springing up. It’s a poor country and a certain amount of corruption goes on. One way of money laundering is to construct houses, and everywhere you go half finished or empty concrete structures loom up along the road side. Although there are national parks, the government does not police them, so logging is a serious problem. I hope in the long run the beautiful countryside and the gentle hum of bees amongst flowers is not lost completely.

I am a UK beekeeper who has recently moved from London to windswept, wet Cornwall. I first started keeping bees in the Ealing Beekeepers Association’s local apiary in 2008, when I created this blog as a record for myself of my various beekeeping related disasters and - hopefully! - future successes.
View all posts by Emily Scott →
This entry was posted in Uncategorized and tagged book-review, Holidays. Bookmark the permalink.

19 Responses to Book review – ‘Travels in Blood and Honey: Becoming a beekeeper in Kosovo’ by Elizabeth Gowing