My second blog post on the Federation of Middlesex Beekeepers’ Associations annual ‘Bee Keepers’ Day‘, held last Saturday. Below are my notes from the second speaker, Dr Karin Alton. Karin is an entomologist from Sussex University, working with Professor Ratnieks at the Laboratory of Apiculture & Social Insects (LASI) on the hygienic bee project there. She explained to us that the hygienic behaviour shown by some honey bee workers includes:

Through these types of behaviour, hygienic worker bees reduce the need for chemical anti-varroa treatments. There is a genetic basis for hygiene, with several recessive genes linked to increased hygienic behaviour. Around 10% of the general population of British honey bees have these genes. It is not something that bees can be taught or trained to do, either by other bees or humans – it’s all in their genetic coding.

The Sussex team are trying to use dark, locally adapted bees for their hygienic research. They have been experimenting with killing off small areas of brood by pouring liquid nitrogen into circles of brood comb, using baked bean cans! Within 48 hours hygienic bees will clean out the circles of destroyed comb. So far the colonies studied have varied from between 20-90% of the dead brood having been removed after 48 hours, depending on how hygienic the bees were.

Breeding hygienic bees is obviously difficult because bees within colonies vary in hygienic behaviour, due to being half-sisters with a number of different fathers. Trying to breed for hygiene involves a continual process of testing and assessing bees. Artificially inseminating queens provides control over which drone sperm the queen receives, but, Karin commented, is “fiendishly difficult”! Inseminating a queen, even one knocked out with anaesthetic, requires a very steady hand. That we have no queen rearing industry in the UK adds to the difficulty, so the Sussex team is hoping to receive training from outside experts.

One of our 2012 queens, Queen Neroli. Copyright Emma Tennant.

More details about the project are available on the University of Sussex website: Breeding disease-resistant ‘hygienic’ honey bees.

Changes in our landscape

Karin next turned to a different topic; the dramatic change in the UK’s landscape over recent decades and how this has affected the amount of forage available to bees. A few sobering facts:

Given these figures, from my point of view it’s no surprise that many bee species are struggling. It’s more amazing that we have any bees left at all. 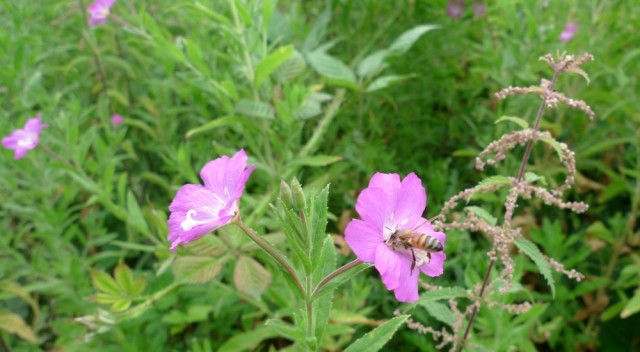 As well as her research work at Sussex Uni, Karin is also involved in running her pollinator-friendly wildlife gardening consultancy company FlowerSCAPES, along with her husband Steve Alton. Together they carry out planting advisory services, talks and training, as well as selling wild flower seed mixes.

They have found that councils, and the British people in general, are very reluctant to change their gardening habits. In many cities, bedding plants (mostly grown in Holland and shipped over) are changed three times a year, at a cost of approximately £60-65 per square metre per year. In addition to this expense, councils often mow public lawns in places such as parks around 15 times a year. West Sussex County Council pays £1m annually to cut its grass.

What level of emissions do you think an industrial lawnmower produces? If you think less than a car, you’re likely to be wrong. Take a look at these figures, tweeted below by Steve & Karin:

Mowers, such as the Ransom Jackson Commander 3520 model,  churn out CO2 at alarming rates. Unlike with cars, there are no regulations requiring British lawnmower manufacturers to either reduce or advertise their emissions.

We are currently in a situation where councils are so financially stretched that they are merging hospitals and cutting community services such as libraries. Is cutting grass really what our councils should be spending money on? Sowing Karin’s pollinator mixes only costs £5 per square metre annually, and meadows only need three cuts a year. 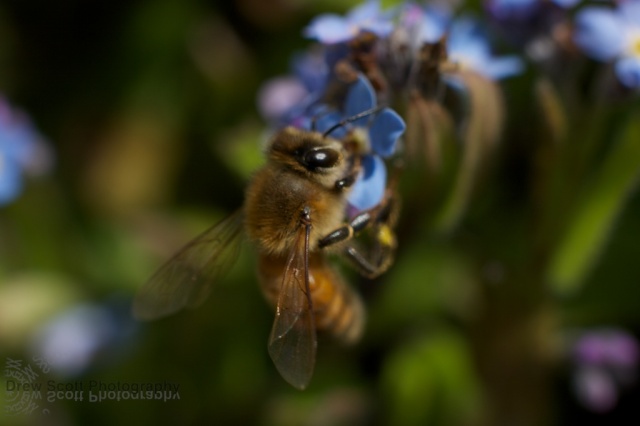 One council told Karin that they received a barrage of complaints from dog walkers about their dogs getting wet, after park grass was left to grow longer. My way of looking at that is that dogs are not about to go extinct, whereas several native bee species face that threat. What’s our priority as a society, protecting our native wildlife and spending our money on community services, or religiously trimming grass ultra-short so that we don’t have to towel-dry our dogs?

Karin finished her talk with a plea to us beekeepers to become ‘floral terrorists’, planting bee-friendly flowers wherever we go. Let’s ditch the dull roundabouts of imported bedding plants and go back to beautiful poppies waving in a summer breeze.

I am a UK beekeeper who has recently moved from London to windswept, wet Cornwall. I first started keeping bees in the Ealing Beekeepers Association’s local apiary in 2008, when I created this blog as a record for myself of my various beekeeping related disasters and - hopefully! - future successes.
View all posts by Emily Scott →
This entry was posted in Disease prevention and tagged gardening for bees, hygiene, research. Bookmark the permalink.

Leave a Reply to Talking With Bees Cancel reply