A box full of bees

My complaining about the weather worked – it has responded by sending sunshine and warmth our way. It has actually been so bonny that I have been walking around without my coat on! And thinking about getting my sunglasses out!

This has coincided with some holiday I booked off, so I’ve been able to inspect the allotment bees for the first time this year. I felt strangely apprehensive when I opened up the hive, partly because it’s been so long since I’ve properly looked at them. Early October was probably my last inspection. This is what I saw in the super: 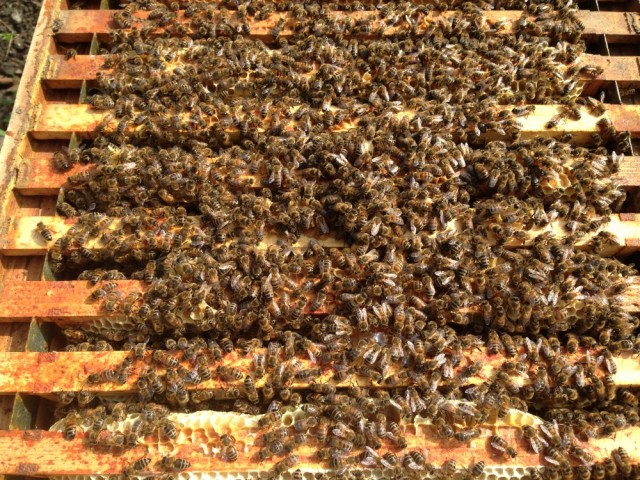 Now that – THAT is a box full of bees. A sight we have been longing to see in our hives at Perivale. And below it was another box full of bees, because I left them on a brood box with a super on top over winter. I decided not to use my smoker, as I dislike disturbing the bees too much by blowing smoke in their sensitive eyes. The bees look daunting at first, so you move slow and gentle. A couple were buzzing round my head, but you hold your nerve and before you know it twenty-two frames later you’ve inspected the lot, no smoke and no stings either.

Nearly every single frame of the super had young brood or eggs in it. Above is the brood box stacked underneath the super, which was also packed with bees. Inside I found older brood and wonderful golden rainbow walls of pollen. My only worry is they are quite low on nectar/honey compared to the amount of pollen they have. And in a hive this big, with drone brood and drones walking the frames, they will be thinking of swarming soon.

Part of the reason I took time off was to get a hive delivered from Thornes. So I have a spare brood box now, plus eleven frames of foundation, all ready to do a Bailey comb change to get them to draw out new clean frames of comb. That should take their minds off swarming. The only problem is I have to get the brood box and frames down to the allotment, which will take a taxi and probably also the help of Drew when he gets back at the weekend.

Would appreciate thoughts from other beekeepers on how to do a Bailey comb change with a brood-and-a-half (as a brood box plus a super containing brood is known). Should I place the foundation frames above both boxes? Or in-between the brood box and the super for extra warmth to draw the combs out? I have two queen excluders.

Just as I was finishing the inspection, an old man approached behind the fence. He asked me the usual questions about whether I get stung and how much honey I get, telling me he finds the bees interesting. “I’m glad you like them” I said. “Oh no”, he replied, “I don’t like them! I got stung once and I’ve never forgot it”. As he was saying this, I noticed with dread a little worker climbing on his hair. I froze – wondered whether to tell him – the bee flew off. Such as a relief as when bees climb on your hair they have a tendency to burrow in and get stuck. I have received some of my nastiest stings from bees doing this, because the skin is quite thin on your scalp. He walked away unaware of the bee’s investigations.

As I left he shouted out “You’re a better man than me” across the allotments. Thanks, I think!

Here’s something else I found – dead, but proof that stag beetles roam the allotments.

The warmth has brought the flowers out. The bees like red deadnettle.

And I was excited to find this pinky/purple pulmonaria, also known as common lungwort, on our plot. I only know what they are because some kind people on Twitter told me. 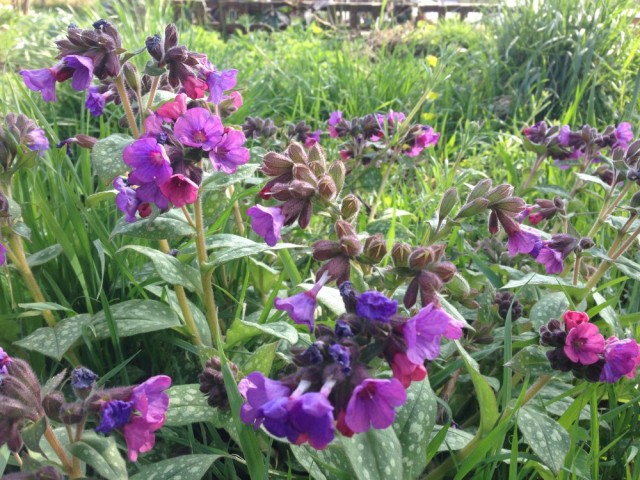 A magnolia on Tuesday evening in Walpole Park. Drew and I were walking home, having had our first after-work picnic of the year. It’s lovely to enjoy spending time outdoors again.

35 Responses to A box full of bees