I think I can now safely say that all of our five colonies made it through winter. I am not completely satisfied with this result as two are small, only on about four to five frames. A perfect result would have been five booming colonies with brood boxes full to the brim.

Still, I know we are lucky to have our bees safe and well, as the blogs I read around the world remind me that not all colonies make it through winter. We have not opened our hives to find the heartbreaking sight of a tiny dead cluster. Our success has probably been aided by a 2014 which was a dream year for weather, with plenty of warm, sunny days interspersed by light rain to keep the nectar flowing. 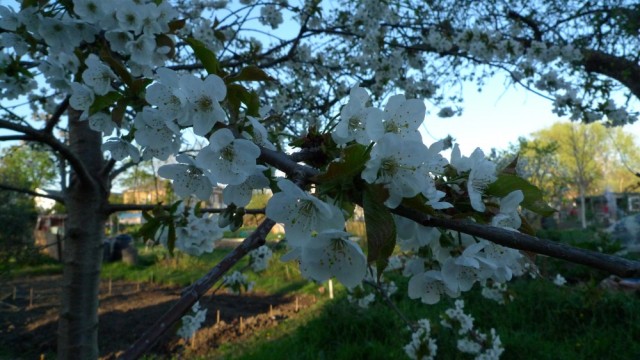 Lots of beautiful blossom out now for the bees

Having five colonies does mean a lot of work though, especially at this time of year. Endless hammering together of frames (my least favourite job) and stirring sugar into water to make syrup to encourage the bees to draw out fresh new combs as part of the Bailey comb exchange. Then transporting the heavy syrup to the bees, trying to find a space to fit with my bulky bee equipment on a packed Saturday bus. Rushing down to the allotment before work, or rushing over afterwards when it’s nearly getting dark. Broken nails and yellow propolis stained hands.

I am grateful for the sunshine though, and am enjoying watching all the new flowers coming along. The bluebells are here!

Bluebells at the Ealing apiary

Bluebells under a tree at the allotment

Last weekend I helped out at a practical session for the new recruits taking the Ealing association’s annual beginners course. I supervised them inspecting a few hives, showing them how to turn the frames and what they were looking at. There were about thirteen of them, so as you can imagine there were plenty of questions. Everything is new; they are learning the complete basics of what pollen, nectar, honey and brood look like. Some of them didn’t know what a varroa mite was (such blissful innocence).

When opening up hives with beginners my main worry is not that the bees will hurt them, but that they will hurt the bees. It’s hard for them to remember that they should hold the frames over the hive, as otherwise the queen could fall or fly to the floor and get squashed. Still, I did think the lady who watched without a veil on was extremely brave; she obviously has not been stung under the eye before. Beginners tend to be obsessed by two things: honey and finding the queen. We found some queens and saw plenty of honey so that was good.

When I told Drew about the beginners session, he said “Will the first lesson be how to eat cake?”. I explained to the beginners that the association is really just a tea and cake club with the beekeeping as an excuse on the side, but I’m not sure they believed me. They’ll learn.

When I visited the allotment bees, I was amused to discover that they’ve propolised the block of wood that sits over one of the crown board holes so that it’s propped up at a jaunty angle. The power of propolis! 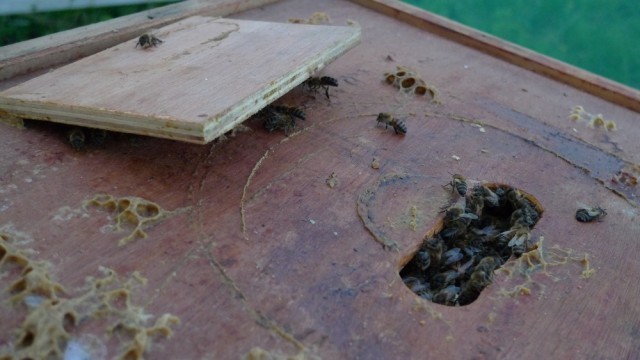 Bees hanging out underneath the wood. They’ve built some comb under there too.

The second time I’ve spotted this flower emerge at the Barbican centre. It’s a snake’s head fritillary, official name Fritillaria meleagris. They used to grow in meadows alongside the river Thames and were collected in huge quantities to be sold in London markets, but have now become a rarely seen wildflower. A lot of their habitat was destroyed during World War II, when most of the ancient meadows became used for food crops.

The running around after the bees recently has left me partly happy to see them again but also quite exhausted. We are arranging to sell two colonies, but sometimes I have thoughts about giving up beekeeping completely, or at least giving up one of the sites. The main thing stopping me is that I enjoy being with the bees and it would be a shame to lose the skill. I would miss the bees but not all the logistics of storing and transporting equipment. Perhaps I’ll see how it goes this summer. Have you ever thought about giving up beekeeping?

46 Responses to Beekeeping – the frantic way