The queen who went in the wrong place

Today I found a mystery awaiting me at the allotment. Ever seen this many bees under a hive? Just hanging out? And bees with pollen disappearing within their midst?

Usually you might get maybe a couple of bees wandering around under the floor. I had several thousand. I had a look through the hive to see if that might help solve the mystery. And found these:

Both of the two queen cells which were capped last week are now empty. The only brood left in the hive now is sealed. Either I have one queen or two – possibly there was a fatal fight, perhaps the older queen stung the younger one while she was still in the cell, or possibly one queen left with a swarm. 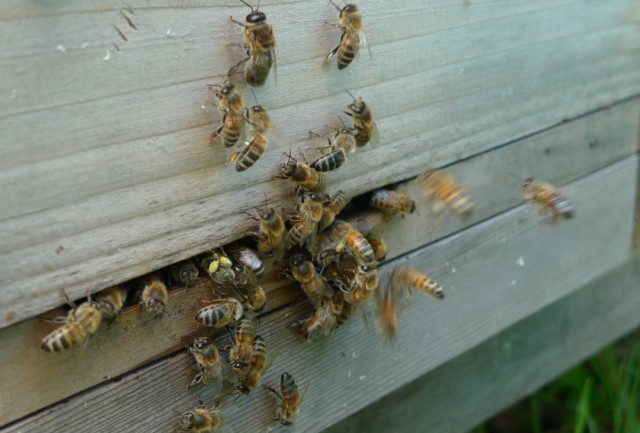 All looked well at the entrance, the bees were enjoying the sunshine after a pretty miserable and rainy week.

I texted Tom about the mysterious cluster. He very kindly volunteered to come and help, as he thought it best to take the hive apart, turn the hive floor upside down and shake the bees back in. I am glad he could help as the colony is a big ‘un on two brood boxes and a super, making for a lot of heavy lifting.

Having pulled all the boxes off, Tom turned the floor upside down, revealing the huge mass of bees collected there. He rested the floor on one of the brood boxes and the bees immediately quietly began walking down into the darkness of the frames. I didn’t fancy our chances of spotting any queen present in the midst of all the bees. Then suddenly Tom saw her – a lovely dark and surely mated queen, her abdomen longer than that of a virgin. After a bit of walking about, down she went too.

While all this was going on, bees were flying all over the place as returning foragers were coming home to find their hive mysteriously missing. So it was a bit awkward that one of the other allotment holders chose that moment to bring her two young children over to look at the bees through the netting. While she told them how gentle the bees are, Tom and I were nervously hoping no stings were about to occur.

After they had left, we put the hive back together and peace was restored. So what happened? Well, Tom has a theory that after her mating flight the queen came home and got confused – instead of going in the entrance she went under the hive. There had been a large amount of bees clustering under the hive last weekend too, possibly to keep cool. She may have smelled their Nasonov glands and thought under the hive was the place to be. I am glad she’s not out in the cold tonight.

The curious thing is, queens are only supposed to be ready to mate 5-6 days after emerging. I inspected last Saturday and the cells were still sealed. If she emerged last Sunday, the earliest she would have been ready to mate would have been Thursday, a very rainy day. Did she only just go out to mate yesterday? Would her ovaries have developed enough to make her a full sized queen already? Or did I somehow miss an older queen cell – not impossible, with three boxes to inspect. Another beekeeping mystery.

I’ll finish with another mystery – a pretty pink flower which I saw a bumblebee enjoying. I’m hoping someone will know what it is.

EDIT: Many kind people have now told me it’s comfrey. Lindylou has commented: “I think it’s Comfrey too. In English sometimes referred to as knitbone because of its healing components. Let dogs eat it if they want too it is good for them if they are experiencing leg and hip pain. You can roll mince etc. up in it like you can with cabbage and grape leaves too.”

And nessaplantlover says “your mystery flower is comfrey. I have plants with white flowers and purple flowers. Cut the plant back and put on the compost heap or put it in a big bucket ifvwater and leave for a couple of weeks to fester. It will stink but you can then use the stinky water diluted to feed your garden plants or your veggies. They will love it.”

I am a UK beekeeper who has recently moved from London to windswept, wet Cornwall. I first started keeping bees in the Ealing Beekeepers Association’s local apiary in 2008, when I created this blog as a record for myself of my various beekeeping related disasters and - hopefully! - future successes.
View all posts by Emily Scott →
This entry was posted in Queens and tagged queen cells. Bookmark the permalink.

33 Responses to The queen who went in the wrong place