How warm is your bra and are you afraid of ants?

“How warm is your bra?” said John Chapple to Clare as she arrived at the Ealing apiary yesterday. This seemed like a slightly nosy question to ask a lady and I wondered if the torrential rain had left John concerned that Clare was soaked through. However all became clear as, in the style of a magician, John pulled two queens out of his pockets. Each queen was soon snuggled away tightly inside Clare’s bra (in a cage, not roaming freely).

Although there were not that many people around on a rainy bank holiday, we had three lots of cakes. Mine was coffee and walnut, Clare’s a strawberry sponge and Rebecca had bought fairy cakes. They were all demolished by the time I finished inspecting our hives. I left the crumbs for the robin. Conversation over tea was mainly to do with the benefits of ale and drinking in general.

Pepper’s hive seems to be doing fine after we split them two weeks ago and has not produced any new queen cells. I put a super on; if the rain stops they can start collecting some nectar. The other half of the artificial swarm split hopefully has a new queen in there, but she’s not laying yet. No point worrying unless she’s not laying in a couple of weeks time. Melissa’s colony is lovely as ever, full of bees and honey, and showing no signs of swarm preparations so far.

Tom took Jonesy and me to see the hives at Perivale Wood, which was a bit of a treat. The hives there have an unusual set up as they’re inside a shed.  “Are you afraid of ants?” he asked as he removed the lid from one of the hives. I did get quite a shock as an entire ant colony with mounds of eggs was living in the roof. The bees don’t seem to be suffering for it and were thriving. Perhaps the ants like the warmth they give off.

I have signed up for the London Beekeepers Association mentoring scheme this year. This involves being assigned mentees who have taken the LBKA beginners course and then come and help me with inspections over the summer. This year there have been an unusually high number of people on the course who want mentors, so I have been given four mentees. Julie and Jeff were away for the bank holiday but Bertrand and Chris were able to meet me at the allotment today.

It was nice to have company and help as sometimes it can get a bit lonely at the allotment when I’m on my own. Below is Chris looking at a frame of honey and pollen. 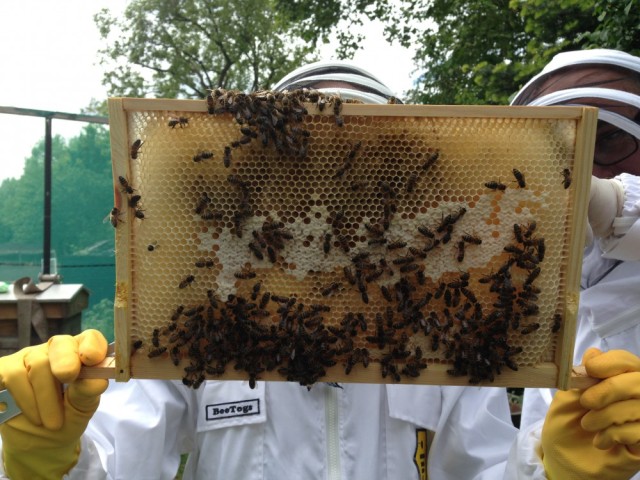 We didn’t see the new queen, Cassiopeia, but there were a few eggs and uncapped larvae so she seems to have just started laying. Worryingly Bertrand spotted one uncapped queen cell. Surely they are not going to want to try to swarm again and just one cell suggests supercedure rather than swarming to me. So I left the cell in case they know something I don’t about Cassiopeia. Perhaps the time she spent under the hive (see previous post ‘The queen who went in the wrong place‘) has weakened her.

Inside the nucleus Queen Andromeda is laying well. Frustratingly I couldn’t find her to show Chris and Bertrand, but she’s certainly there somewhere. This colony can probably be transferred to a full sized hive with the help of some dummy boards next week. I am hoping the main madness of the swarming season is now over!

24 Responses to How warm is your bra and are you afraid of ants?