The Hive at Kew

Try to imagine yourself inside a bee colony. Close your eyes so that it’s dark. Imagine yourself to be one of many thousands now, crawling amongst the comforting scent and hum of your sisters. You can feel their vibrations speaking to you, shaking out many messages. The wax combs carry throbbing tales of flowers for the taking, of your queen, of work to be done. You touch a sister with your antennae and she stops to give you sweet nectar; you pick up a heady regal waft as she does so, and you know your queen is amongst you.

Communication – vibrations – messages – the busy world inside a hive. The magnificently bearded artist Wolfgang Buttress has tried to recreate some of this experience for visitors in his new artwork at Kew Gardens, ‘The Hive‘. Ealing beekeepers have even had some involvement in this as one of our members, Llyr Jones (Jonesy) looks after the bees at Kew. Jonesy also keeps bees on the rooftop of the John Lewis HQ – you can read about this on the ‘Meet our honey bees‘ section of their website. 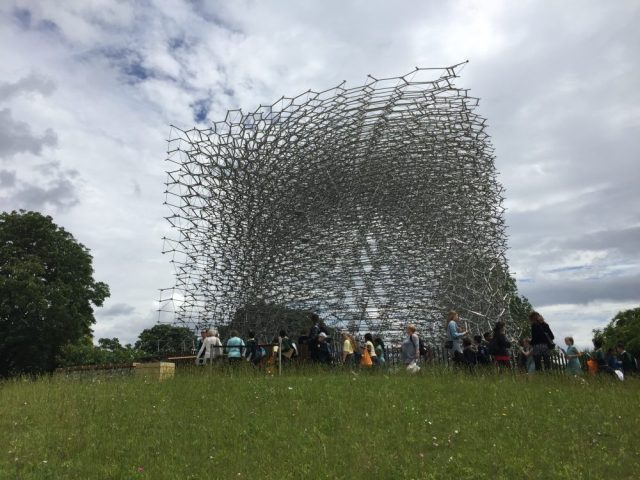 “The installation is made from thousands of pieces of aluminium which create a lattice effect and is fitted with hundreds of LED lights that glow and fade as a unique soundtrack hums and buzzes around you.

These multi-sensory elements of the Hive are in fact responding to the real-time activity of bees in a beehive behind the scenes at Kew. The sound and light intensity within the space changes as the energy levels in the real beehive surge, giving visitors an insight into life inside a bee colony.

With a wildflower meadow leading the way to The Hive, it will be a truly immersive, multi-sensory experience taking visitors on a journey, exploring the vital role of bees and other pollinators in feeding the planet.”

The activity levels of the bees are transmitted through ‘accelerometers’, vibration sensors which have been placed in a hive at Kew to measure the activity of the colony. The accelerometers pick up the bees’ vibrations and send them in real-time to the Hive installation. The changing vibrational signals then influence both the soundtrack and the lighting effects, so that the 1,000 LED lights which line the interior of the Hive become a visual representation of the bee colony’s activity.

I visited this week and took a few photos. Buggies are not allowed in the Hive, so bear in mind that the photos were taken one handed whilst holding a wriggling baby. He was very awake and fairly grumpy so my visit was not as long as I would have liked! 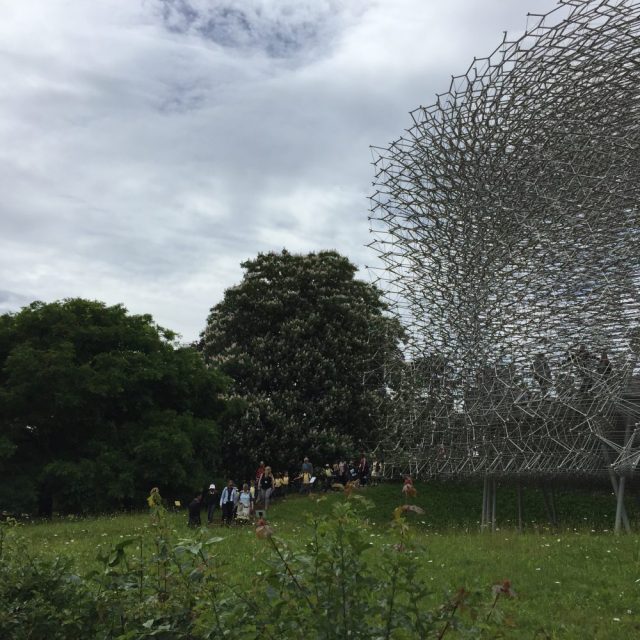 Visitors walk up to the Hive through a one-acre wildflower meadow specially planted with 34 native species which appeal to bees. Ironically I saw bees everywhere elsewhere in the gardens but not in the meadow. Awkward customers. 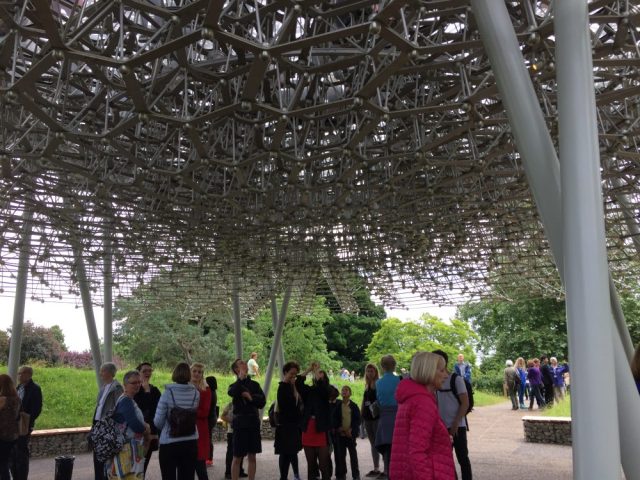 First you walk beneath the structure and can look up into it. For this reason Jonesy gave me the useful tip not to wear a skirt! A member of staff was enthusiastically giving short talks about bees and how the installation works. There are also bone conductor booths. These were very popular – you place a wooden stick in your mouth and can then feel four different examples of vibrations made by honey bees (including queen piping and the waggle dance) travelling through the booths to your skull. As I was holding Tommy, unfortunately I couldn’t try these out. 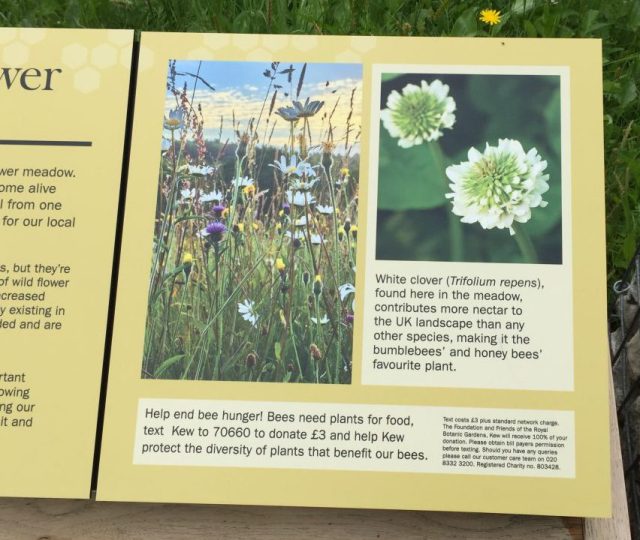 You then walk up a path through the meadow into the installation. There are signs like the one above to read on the way. I found it interesting that white clover is so important for UK bees. 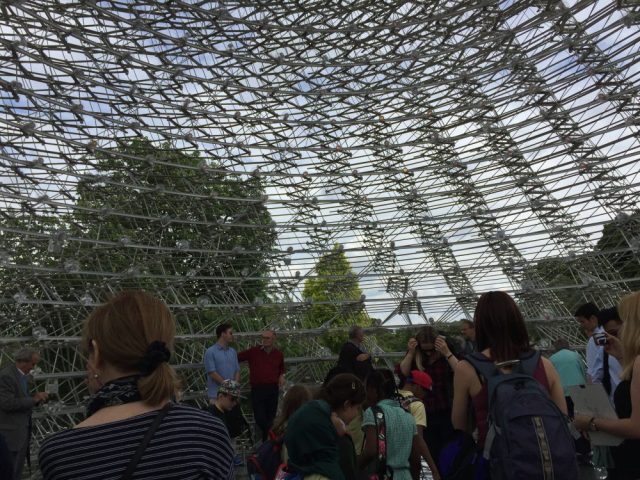 Once inside the main structure above, there is a lovely gentle throbbing humming noise surrounding you. Meanwhile the LED lights perched on the walls glow on and off in ever-changing patterns. I liked to imagine that they represented individual bees touching or sharing nectar with each other. The ebbs and flows of the music are quite soothing and even Tommy seemed to enjoy it and calm down a little. Of course it gets quite crowded up there, but perhaps that helps recreate the intense atmosphere of a busy bee colony! 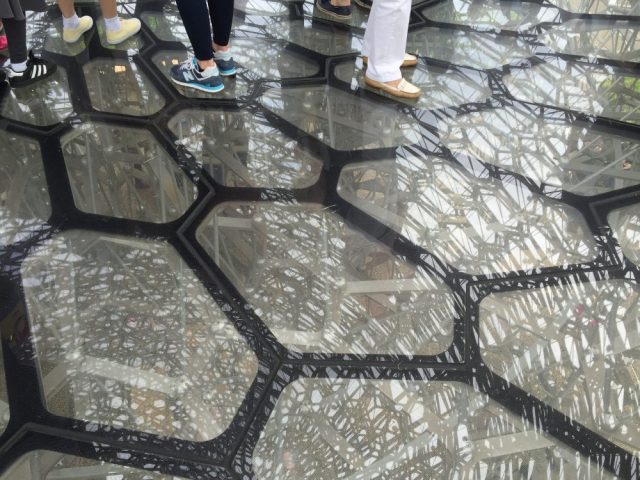 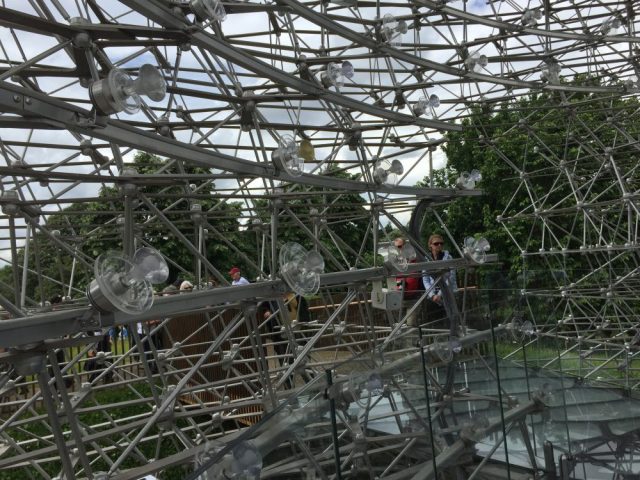 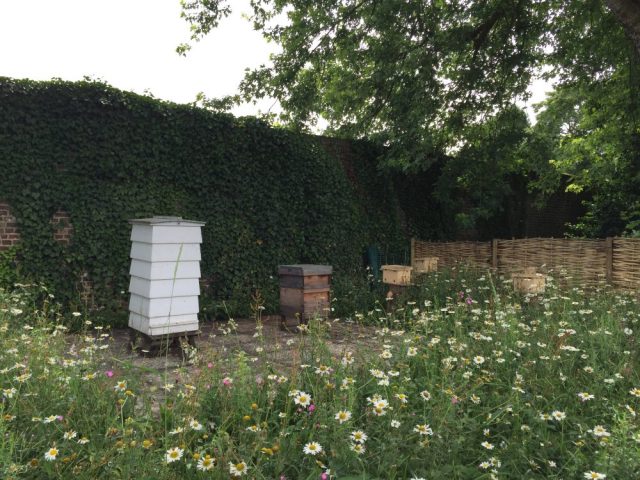 I discovered the bees themselves later, in a much quieter part of the gardens. Smaller bumblebee boxes have been set up (seen to the right of the photo) as well as the honey bee hives. I wonder if the bumbles have been successfully persuaded to stay in them, as they are fussy about using man-made homes! 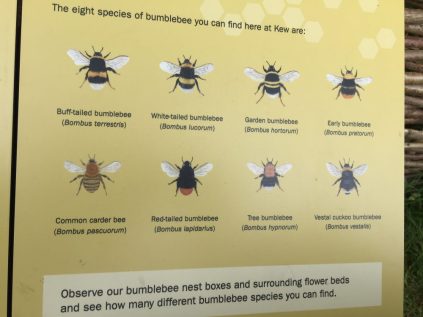 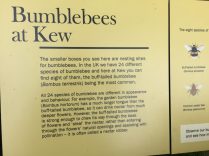 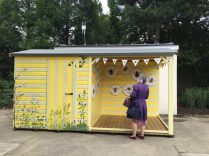 There are many interesting facts to read about bees scattered amongst the gardens. Wolfgang Buttress and Kew have really put a lot of effort into raising people’s awareness of our lovely pollinators.

Scientists are discovering new information about honey bee communication all the time and it is clear that their use of vibrations to communicate goes well beyond the waggle dance. Wolfgang Buttress was inspired by the work of Dr Martin Bencsik, whose research team at Nottingham Trent University has pioneered using accelerometers within hives to detect and translate the vibrations made by the bees. For instance, the team has detected a a specific range and amplitude of vibrations used by bees when planning a swarm, up to two weeks before swarming occurs.

By the way, according to Nottingham Trent uni’s website Dr Bencsik currently works within an EU-funded consortium which includes research institutions, beekeeping associations and businesses. I hope his work will continue to be funded once we leave the EU.

More about The Hive:

31 Responses to The Hive at Kew