It was good to see a bee-themed company on this week’s Dragon Den. I’ve been following the progress of Joe and Andy from Just Bee Drinks since I helped them out with some market research feedback a couple of years ago. Joe’s dad and grandad were beekeepers and he grew up adding honey to his tea. This gave him the idea for a honey sweetened rather than the usual sugary or artificially sweetened drink. Just Bee Drinks are now for sale in national retailers like Boots, Waitrose and Holland & Barrett. 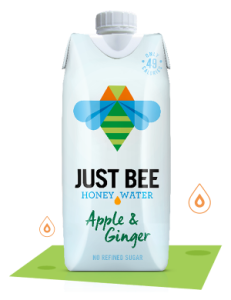 It was interesting to hear the dragons’ feedback. Deborah Meaden said “It’s very personal but I don’t actually like the taste. It’s slightly antiseptic” and a couple of the other dragons agreed with her. I’m now curious to try one to see for myself!

Colony collapse was also brought up by Deborah, who wanted to make sure the honey wasn’t coming from intensively farmed bees. The duo reassured her that all of the beekeepers who supply the honey are completely ethical and leave the colonies enough honey for winter.

You can catch up with the show on the BBC website and find out whether the pair got the investment they were after. Joe and Andy have also blogged about their experience on the show: Dragons Den: our story. Let’s hope more bee-themed business ideas are featured in the future!

I am a UK beekeeper who has recently moved from London to windswept, wet Cornwall. I first started keeping bees in the Ealing Beekeepers Association’s local apiary in 2008, when I created this blog as a record for myself of my various beekeeping related disasters and - hopefully! - future successes.
View all posts by Emily Scott →
This entry was posted in Uncategorized and tagged TV shows. Bookmark the permalink.